Ryomen Sukuna is a terrifying cursed spirit capable of haunting even the best of jujutsu sorcerers. In fact, he is also the unrivaled King of the Curses since the Heian era. We get a very tiny glimpse into his boundless power for the first time when he exorcised a special grade cursed womb spirit without breaking a sweat.

In this annihilation fight, at the flick of his fingers, Sukuna showed us his extraordinary technique: the Malevolent Shrine. Within moments, the cursed womb is split into multiple pieces without Sukuna as much as touching it. This instance was the first that came close to even basic horror (read: gore) in an otherwise easygoing and amusing shounen anime.

We saw the power of this “Malevolent Shrine” only once more in the Jujutsu Kaisen manga after it. But, it still remains a mystery to us all, with a little information to piece together ourselves. So, what exactly is this domain? What all do we know of it? This article will put the puzzle pieces in order for you!

What is Sukuna’s domain expansion or Malevolent Shrine?

As the title suggests, Sukuna’s domain expansion technique is the Malevolent Shrine or the Fukuma Mizushi.

When Sukuna unleashes this technique, it slices the opponents within its range into pieces. This effect is not just the domain at play. Actually, Sukuna’s innate cursed technique of cleave and dismantle takes its complete form in the Malevolent Shrine.

Malevolent Shrine, as the name suggests, takes the form of a deformed shrine housing a demon. This shrine is probably a Buddhist reference, too, since Sukuna himself finds records in the Nihonshoki.

Sukuna’s domain is teeming with demonic entities and enormous cursed energy. The most striking feature of the Malevolent Shrine is the bull-shaped skulls that spill out of it. It also has horns on the roof and eerie mouths visible on each side.

As Gojo said, every attack in a domain is guaranteed to hit the opponent. Malevolent Shrine is so extraordinary that he could even beat the strongest Ten Shadows shikigami, Mahoraga, with it. When we talk of grandiose and power, the story puts Malevolent Shrine as a divine technique. But, first, let’s unfold the mystery behind Malevolent Shrine’s Japanese name.

Everything about Sukuna is shrouded in enigma as of now. His origins, motives, actions; we know nothing of them and their reason. Even his interest in Megumi is a huge question mark. But, this mystery extends to the Japanese name of Sukuna’s domain as well.

English translations call Fukuma Mizushi “Malevolent Shrine,” but the Japanese text translates to Demonic Feretory. As you can see, the name of Sukuna’s domain expansion itself is incredibly ominous. But, this might actually hold a hint to Sukuna’s hidden cursed technique he used against Jogo at Shibuya.

For that, we need to know the meaning of feretory. In simple words, a feretory is a place or container to hold the relics of saints. Now, we know that saints and shamans are very closely related and that Sukuna was a shaman when he was human. So, does Malevolent Shrine hold Sukuna’s relics? The only relics a shaman has that I can think of are cursed techniques, right?

This tinfoil postulate guides us to a theory that Sukuna has more than one cursed technique. As we saw with Gojo (Six Eyes and Limitless), it is perfectly possible to possess multiple cursed techniques. As a matter of fact, Sukuna’s resistance to poison just might be one of these techniques. The theory also falls in line with how Sukuna used flames to fight Jogo and how he knew all hand signs well. But, of course, there might be some prerequisites to ‘storing’ techniques.

If it is anywhere close to accurate, this fact would be a scary scale of Sukuna’s powers. Would his domain change with every cursed technique? Possibly, but we know nothing of that yet, even from Gojo. Talking of that, Malevolent Shrine is different from other domains we have seen in Jujutsu Kaisen. Here is why:

How is Malevolent Shrine different from other domains?

There is no doubt that Sukuna is in his own league. We can’t even compare him to powerful curses, let alone shamans, except for Gojo. But, what sets him and his abilities, primarily his domain, apart?

Jujutsu Kaisen described Sukuna’s domain expansion ability in a great way. It is like an artist painting masterpiece not on a canvas but on air. And thus, it is a divine technique for a good reason.

Unlike other domains, Malevolent Shrine does not create a confined space with a barrier. To put it simply, Malevolent Shrine directly unleashes Sukuna’s technique into a large area instead of trapping an opponent inside a confined environment of cursed energy. If you remember how Yuji broke into Mahito’s domain and Megumi into Dagon’s, you can think of it as the opposite.

While the other curses and shamans create an enclosed space of cursed energy in their domains, Sukuna’s domain is open for an exit. (Not that you can, though.) By doing so, Sukuna forms a binding vow that vastly enhances the range of his domain. It also boosts the guarantee of Sukuna’s attack landing on the opponent.

So, while an escape route seems like an advantage to his opponent, in truth, it benefits Sukuna more. However, there is a range to which Sukuna’s domain expansion can go. The Malevolent Shrine can reach up to 200 meters in the area around the cursed spirit. But, he can adjust this range, as we saw at Shibuya.

Most of us still get goosebumps when we think of Sukuna at Shibuya. Our poor Yuji most definitely feels it more deeply than we do, though. Not only did he allow Sukuna to (indirectly) debilitate Inumaki, Sukuna also mercilessly killed a bunch of people. How and why did he do so? Well, you might already know but let’s have a recap.

At Shibuya, Sukuna found himself in a predicament. In his weak state, Megumi had trapped Shigemo, who was hunting him, in the exorcism ritual of Mahoraga. Unfortunately, this ritual would kill not only Shigemo but also Megumi himself. Therefore, the only way to save Megumi was for Sukuna to defeat Mahoraga. Since Mahoraga is the strongest Ten Shadows shikigami with a unique ability, Sukuna used his domain expansion.

The domain expansion Sukuna used was different from the first time he used it. Rather than 200 meters, Sukuna restricted it to 140 meters to leave Megumi out of its range. From this instance, we can say that Sukuna can adjust the domain to a specific lower limit. He, of course, didn’t do so at Shibuya because he couldn’t care less about other humans dying of it.

Thus, this domain served two purposes – keeping Megumi out of range and conquering the seemingly invincible Mahoraga. We also came to know that nobody can see Sukuna’s technique is invisible slashing and dicing. Moreover, in Sukuna’s domain expansion, his technique becomes faster than the speed at which Mahoraga could regenerate using the reverse cursed technique.

Well, Sukuna’s domain expansion at Shibuya also painfully pointed out that he is the undisputable King of Curses. But, another question persists when we say that title. What about when the King of Curses goes against the strongest shaman?

Ryomen Sukuna vs. Gojo Satoru, whose domain expansion would win?

The battle between Sukuna and Gojo is a spectacle all of us await at the end of Jujutsu Kaisen. In line with that, we also see multiple speculations as curiosity gets the best of us. Both Sukuna and Gojo are symbols of terrifying untouchable power – so just what would happen if they engage in a domain fight?

Gojo’s domain is the Infinite Void (Muryokusho), where infinite information runs through his opponent’s mind. Every action and thought is repeated an infinite number of times, paralyzing even a curse like Jogo. Gojo’s domain can harm the human brain even in 0.02 seconds. He also possesses unlimited cursed energy because of his Reverse Cursed Technique.

Will the Infinite Void win against Malevolent Shrine? The first factor that could come into play is who lays their domain first. If Gojo manages to summon it first, Sukuna just might be over at once. No matter how strong one is, nobody has the ability to process infinite information. On the other hand, if Gojo is trapped in Sukuna’s domain expansion, he might have difficulty protecting himself if Sukuna neutralizes his Limitless.

Jogo tried to neutralize Gojo’s Limitless too, but since he was far inferior to Gojo, he fabulously failed at it. But, Sukuna, at his maximum potential, just might be able to do so in his domain. It will be a tough fight, and it is too early to speculate on Gojo vs. Sukuna with the little information we have on Sukuna’s abilities.

However, I do think that Gojo’s confidence is not baseless. If he said he would win against Sukuna, I think he must have his calculations. After all, we haven’t seen him at his full potential either. Well, now that we have that down, let’s also talk about an ordinary shaman in Sukuna’s domain.

Can someone escape Sukuna’s domain?

If you, a shaman, get trapped in Malevolent Shrine, will you be able to get out of it? As we saw, Sukuna’s domain expansion Malevolent Shrine affects a vast area. In exchange for this scale, there is no barrier or boundary to this domain. So, you have an escape route. If Sukuna does not use his technique in his domain, you can simply walk out of his range. But unless you are Megumi, don’t even dream he would let you do so.

Even being at the edges of Sukuna’s domain is a dangerous idea and could possibly turn you into Inumaki-senpai. Great, now you can’t speak properly nor gesture with your hands, congrats! Of course, you won’t leave Sukuna’s domain unscathed even from the edges, but you have a better chance there.

Another technique I imagine a sorcerer can employ is the Simple Domain. In this domain, a particular area surrounding the shaman neutralizes any and all techniques that come in range. It is a crude concept but might help you hold your own against Sukuna for a while. With the amount of cursed energy he possesses, I think Sukuna can easily overpower a puny Simple Domain, though.

There is a slight possibility of escape if you are a shaman googling this before challenging Sukuna somewhere. But if you are an ordinary human reading this, I hate to break it to you, but the answer is no. You and I will be ground into pulp if we get caught in Sukuna’s domain expansion. 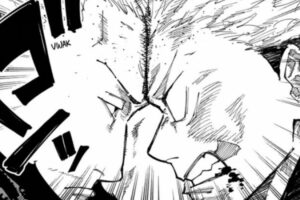 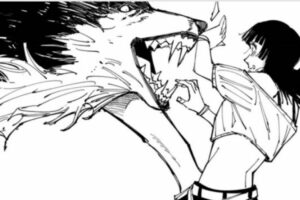 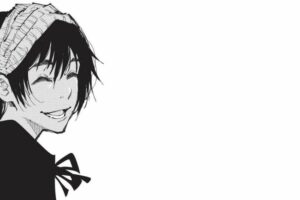