Amongst other abilities, Domain Expansion is the most useful to jujutsu sorcerer. It ensures that the attacks absolutely land on the opponent, making it a powerful weapon against fatal enemies. The Domain Expansion of every shaman differs because it depends on their abilities and cursed technique. We have seen quite a few Domain Expansions in Jujutsu Kaisen, but they still remain a sight to behold. In this article we will take you through the most recent one: Megumi's Domain Expansion!

Jujutsu sorcerers have to go through many ordeals to become more powerful. But to truly realize one’s true potential, the shaman has to be a little selfish about his life. Only then can the shaman see themselves. And one checkpoint of this growth is learning the domain expansion.

Amongst other abilities, Domain Expansion is the most useful to jujutsu sorcerer. It ensures that the attacks absolutely land on the opponent, making it a powerful weapon against fatal enemies. The Domain Expansion of every shaman differs because it depends on their abilities and cursed technique. We have seen quite a few Domain Expansions in Jujutsu Kaisen, but they still remain a sight to behold.

However, there are many intricacies of the domains. It might get confusing sometimes, too. Worry not, this article will take you through the most recent one: Megumi’s Domain Expansion!

Before you read, this article contains a few spoilers from the manga. Read ahead at your discretion!

What is Megumi’s domain expansion?

In Chimera Shadow Garden, liquid shadows cover the entire area around Megumi and his opponent in a battle. Megumi can only manifest an imperfect version of the domain right now. It does not have any boundaries. However, even the incomplete form of the domain looks intimidating.

The entire area of this domain can be controlled by Megumi. All the liquid shadows are at his disposal to manipulate in battles as attack and defense. Megumi can also the shadows of his domain to bind its opponents or support other shamans in battle.

A point of interest in the name of Megumi’s domain expansion is its meaning. ‘Chimera’ means a thing that is hoped for but is illusory or impossible to achieve. This meaning relates to Megumi’s technique in a really fitting manner.. Achieving Chimera Shadow Garden was something he thought was beyond him. Yet, it was his imagination and interpretation of his technique that allowed him to manifest the domain.

The techniques effectiveness depends on the extent of Megumi’s imagination. The more he is able to shed his inhibitions and operate freely, the more impactful the Chimera Shadow Garden becomes! This is because the shadows and the shikigami that are formed in this domain are completely dependent on Megumi’s thought process.

Megumi first used Chimera Shadow Garden when a cursed spirit with Sukuna’s finger like the Cursed Womb arc attacked him. This instance can be called a crucial moment of character development for Megumi.

The curse forced Megumi into a corner because it was too strong. With no other option left with him after being battered up, he was about to sacrifice himself with his last resort. If he initiated the exorcism ritual for Mahoraga, the strongest shikigami of Ten Shadows, he would die but kill the curse too.

Before he could throw his life away, he remembered something Gojo had told him. It was not that Megumi is not strong, he just didn’t know how to bring out his best. Megumi thought that his limits laid at him dying to win. But Gojo told him to try and be selfish; winning by dying and winning even after dying are different.

Remembering this exchange helped Megumi clear his head. He envisioned himself breaking his shackles for his future self to become stronger. He knew his Domain Expansion was imperfect but he used it anyway, surpassing his limits.

This event marked a change in Megumi’s attitude about his battles and jujutsu. His crazed look of epiphany when attempting the domain was a clear indicator of that. Imperfect or not, he had crossed a wall that stood between him and his growth.

The second time Megumi manifested Chimera Shadow Garden was a brutal one.

Dagon had trapped Naobito, Maki, and Nanami in his domain, Horizon of the Captivating Skandha. It was getting impossibly hard for the three of them to find a way out of the vicious battle. All three of them were thoroughly beaten up too.

Megumi came as a blessing (if you know, you know) for them. He fooled Dagon into thinking they were at a domain battle and diverted his attacks. In truth, he was trying to create an opening in Dagon’s domain. His domain also supported the three other shamans in keeping away Dagon’s attack. Well, he did create an opening only to let Toji in, but that is a different thing.

Megumi’s domain expansion in the Shibuya arc is a buildup on Megumi’s development. He has come far from taking the ‘easy way out to using his powers as he wants to. In fact, he himself tells Nanami that he does not plan on throwing his life away. Even in his fight against Toji, he thought his prospect of summoning a domain expansion, not Mahoraga.

So, what happens in Chimera Shadow Garden?

The domain expansion allows Megumi to manifest multiple shikigami at the same time. He can also create shadow doubles or clones, meaning that his ability to manipulate shadows increases multifold. As we saw before, the shadows in the Chimera Shadow Garden change form as Megumi desires.

For example, in the Origin of Obedience arc, Megumi used a clever trick. No matter how strong his domain was, it was pretty evident that the curse was more powerful. The only way to agitate it to land a hit was to bind it. Hence, the shadows beneath the curse’s feet turned into multiple Toad forms and grabbed the curse. It eventually allowed Megumi to exorcise the curse.

Additionally, not only manipulation but also Megumi’s shikigami appear in an advanced form in the domain. Nue looked fierce and stronger than normal circumstances in Chimera Shadow Garden. As Gojo said, a domain expansion is like a power-up for the shaman. It is probably much easier for Megumi to control his shikigami in the domain.

It also seems that his opponents cannot exorcise the shikigami in Chimera Shadow Garden. He can also very conveniently hide himself in the shadows of Chimera Shadow Garden to create a surprise attack. In fact, he can hide in his opponent’s shadow too to land his attacks. He hid himself in the curse’s shadow in the Origin of Obedience arc and attacked it with Divine Dog.

All the above instances and abilities tell us that Chimera Shadow Garden is effective for both offense and defense.

Difference between Chimera Shadow Garden and the Ten Shadows technique

Ten Shadows technique is the cursed technique that Megumi inherited. When he throws hand signs, he can summon the shikigami that represent them. The shikigami use shadow as an intermediary and materialize to their physical forms.

What is the difference between that and Chimera Shadow Garden?

The primary difference lies in the scale of attacks. With Ten Shadows, Megumi can summon only three shikigami at a time (as seen last). But in Chimera Shadow Garden, Megumi can manipulate many shikigami at once. This difference is probably because, unlike usual, the domain’s shikigami don’t appear in their physical forms. They are made of liquid shadows in the domain.

As an extension of the above point, Megumi cannot use many varied attacks at once by Ten Shadows. He has to limit himself to three shikigami and combine their abilities. On the other hand, Chimera Shadow Garden allows him to use the best moves he can think of freely.

The shikigami of Megumi’s domain cannot be exorcised/destroyed. Even if the opponent defeats them, it apparently has no impact on the original shikigami. However, when Megumi summons shikigami using Ten Shadows, it is different. A destroyed shikigami means the end for it; Megumi cannot use it again.

Like Megumi himself told us, Chimera Shadow Garden is still imperfect. Conjuring a domain in an incomplete state and without training has its repercussions. As stated before, both the times Megumi manifested his domain; it caused physical backlash to him.

The cause of this backlash may be the absence of boundaries in his domain. Manifesting a domain with no boundaries to contain it probably expends a lot of cursed energy. A controlled domain like that of Gojo or Mahito probably takes lesser cursed energy but demands excellent control. It makes sense that Megumi cannot manifest a complete domain yet because he is still learning of his abilities.

Even if the final form of his domain is without boundaries like Sukuna’s Malevolent Shrine, he has to master controlling cursed energy. In fact, it is possible that since his domain does not have boundaries, he could attempt to break through Dagon’s domain.

What do you think of Megumi’s domain expansion? Let us know in the comments. Also, keep an eye on this article for future updates! 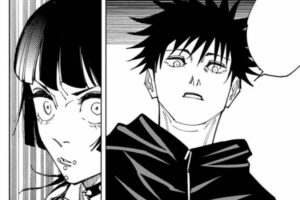