JJK chapter 153 this week features Hakari Kinji's long-awaited appearance, a huge gamble by Itadori and Megumi, and a surprise reunion! 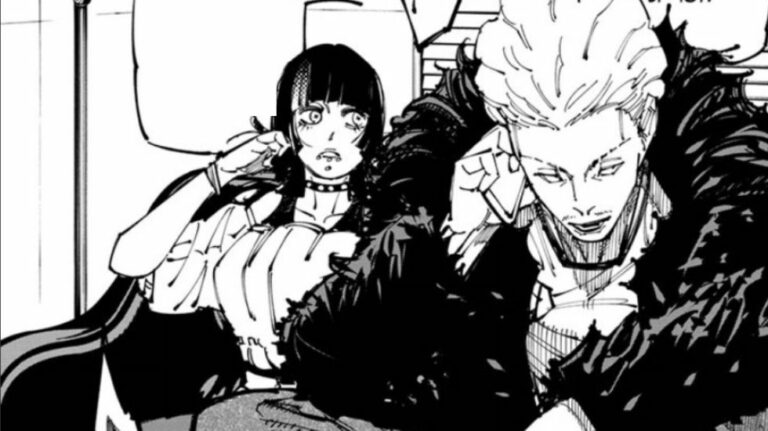 After what seemed like an eternity of wait, Gege Akutami is FINALLY back with JJK chapter 153 this week!

I am sure we all missed Jujutsu Kaisen immensely in this month-long or so hiatus. And we hope that Akutami rested well in this sudden break.

The hiatus had come right after Akutami dealt a few heavy blows to us. The Zen’in arc was short, but our hearts weren’t nearly ready to take it after the Shibuya Incident.

We witnessed Mai’s death, Maki’s awakening of Heavenly Restriction, and the fall of the Zen’ins. A lot to unpack until chapter 152, truly.

But, we recovered from our emotional damage (thank you, sensei) and are now pumped up for the Culling Games.

JJK chapter 153 officially marks the beginning of this arc but was surprisingly slow-paced than usual. We don’t really mind it though, and the story will pick its pace soon in my opinion.

Following the slow pace, nothing major happened in this chapter. There were, however, a few exciting revelations. So, without further ado:

Hakari, the enigmatic prodigy, has been at the back of our minds for quite some time now. Well, JJK chapter 153 introduced him to us at last.

But, this introduction sure as heck took us by a surprise. The person named as the one to surpass Gojo and stronger than Okkotsu did NOT have this image in our heads.

I mean, we knew he was suspended for some anger issues, but JJK chapter 153 took it to a whole new level.

Megumi said that even though Hakari might be stronger than Okkotsu, he is a good-for-nothin! And he does not sound like a good person, like at all. Red flags much? Wait till you hear this:

Hakari is a also bookie for illegal gambling matches.

These matches are between jujutsu sorcerers and curse users. And what is more, the spectators for the matches are non-shamans! After his suspension, Hakari is violating Article 8 of the jujutsu rules which is to maintain confidentiality.

What came as another surprise is that there is another Jujutsu High student accompanying Hakari. Her name is Kirara Hoshi and she is most probably Hakari’s girlfriend. We can guess they both were together in the school together since Kirara is also a 3rd-year student.

This reveal might have left us a bit dumbfounded but the character designs are amazing as usual! Both Hakari and Kirara look fabulous. Sasuga Akutami-sensei! He never misses with creating great characters – in appearance and story.

Although Hakari and Kirara do look like they are anything but high schoolers. But, I guess, we will just give them the animanga disproportionate appearance pass. :p

With that said, there are high hopes for Hakari. If he is meant to surpass Gojo someday, his technique is bound to be something fascinating. And his companion might also play a role in the coming arc. If she is not in this just for Hakari’s credit card, that is.

But we (and Megumi and Itadori) also have a huge doubt. Hakari’s cooperation is a double-edged sword. On one hand, his strength would be formidable in combat. On the other hand, though, he is an almost-criminal. Let’s see what happens ahead!

As Itadori and Co. had discussed with Tengen, they are working on their ends to prepare for the Games.

While Maki ended up slightly deviating from her goal, Megumi and Itadori closed in on Hakari. However, both of them had to take a major gamble to meet the man of the moment.

They had to penetrate the fight/gamble club Hakari was heading. But, there was another problem. Knowing Itadori and Megumi were from Jujutsu High, he would have run away from them. He was infringing the jujutsu laws, after all.

So, Megumi and Itadori had to take a risk by walking up to the club itself. This “fight club”… wait.

Should I talk regardless? The guards of Hakari’s club saying that totally took me out. Just another one of Akutami’s clever cultural references in Jujutsu Kaisen, amirite? Uh, jokes aside.

This fight club, as stated before, involves fights among shamans. But, they can’t use cursed techniques because the spectators, naturally, can’t see it. They will pay only when they have fun.

Like all “reality” shows, the fights in the fight club are also of two kinds. Real real fights and some scripted ones involving the people who win the audience’s hearts. And who better in the ways of muscle than Itadori?

Hakari was remotely observing Megumi and Itadori but had his suspicions about the former. So, in his obliviousness, he gave a free pass to them.

Instead of Megumi who was negotiating, Itadori was called upon to fight. Ha! Hakari does not know of the show Itadori can put with his superhuman physical strength.

Megumi urged Itadori to go ahead while he had his plans (more on that soon). Makes a lot of sense, really.

The best way to meet up with Hakari was not to directly march up and risk a battle. It is to gather intel and favoritism from the inside. Big brain time.

Itadori got into a fight with a fierce brawl…

Were any of us expecting this? Itadori’s first opponent was Panda, who was hiding he is from Jujutsu High!

We were wondering where Panda went to after Principal Yaga’s death (too soon? T_T). It turns out Panda went out to look for Hakari too.

Can’t deny that Panda is more intelligent than some humans in this series. But, what led him to this decision and the fight club?

Panda was locked up until a few chapters ago, so he had no means of knowing from Tengen. I guess we will come to know soon enough.

I also wonder what will be Itadori and Megumi’s reaction when they find out about Yaga.

At any rate, running into Panda made things a lot easier for Itadori. Hakari was sure a no-name shaman could not beat a Panda.

But, Itadori and Panda made sure to put up a great show to thrill the audience and Hakari both. Panda actually deserves an award for his sensational acting.

Hakari immediately called his subordinate to bring Itadori to the roof. He was way too excited about using Itadori if you ask me. Step one: successful, I suppose!

What is Megumi planning?

Let’s talk about the other half of this plan.

As Itadori was fighting in the club and making a show, Megumi went into sneak mode. And I am not even using a metaphor when I say he is working from the shadows.

Megumi can hide himself in his (or others’?) shadows now, as well! His sneak mode appearance looks really good too!

But, what does Megumi intend to penetrate the club in this way? Approaching Hakari this way might be difficult. A best, he can gather information on Hakari. As he said, there is a high chance of danger in this way.

We can see where Megumi is coming from, though.

Tsumiki’s deadline according to the Culling Game rules is in nine days from now. His desperation to save Tsumiki is pushing him to make a move as soon as possible.

We hope Megumi does escape at any hint of danger. Not only will getting in danger reduce their chances of Hakari cooperating, but it will also backfire by hurting them.

I also wonder what the “plan” Megumi had in his mind when Itadori asked about killing people is. Is there something Megumi is working on? Props to him for making sound decisions in a miserable time though.

And I can’t end this article without including this kawaii illustration in this miserable setting either:

So, what did you think of JJK chapter 153? Did you like the new characters and think they will help Itadori and Megumi?