We take a look at the impact that Mai's death will have on Maki and on the plot of Jujutsu Kaisen as a whole! One-half of the Zen’in twins, a foul mouth and arrogance defined Mai Zen’in. She also seemed to love fighting with people (read: Maki) a lot. And hence, she was rightfully the un-cool one of the twins, wasn’t she? All right, she did have her reasons and very sad ones at that to be a meanie to Maki.

But, at the least, I think we can all agree that she wasn’t the fandom favorite, excluding some of you waifu seekers. And then came along the latest chapters of Jujutsu Kaisen to shatter all our impression of Mai…and our hearts along with it. I, and I am sure the fandom as well, was hoping for more appearances of Mai and for the sisters to patch up. Guess we once again forgot that we were dealing with Gege Akutami here. So, the burning question:

Contents hide
Is Mai Zen’in dead? How did she die?
Was Mai’s death necessary?
How will Mai’s death affect Jujutsu Kaisen’s plot?
Of Mai’s life (and death) full of sacrifices

Is Mai Zen’in dead? How did she die?

If you’re here looking for an answer to the first question after reading chapter 150, there is a high probability that you’re either a sucker for happy endings or a necromancer. But moving on to the answer, hoping you’re neither one of those:

Ougi, Jinichi, and Naoya made a plan to corner Maki and Mai when Maki came back. Unfortunately, their father had already decided to kill them, so Mai was already in poor condition when Maki reached the warehouse at the Zen’in clan. Ougi and Maki engaged in a fierce fight which ended in Maki’s defeat. He dragged an unconscious Maki and a barely alive Mai to a curse pit.

The only way to make it out alive was if one of them fought the curses – but Maki didn’t have a weapon, and Mai was in no position to fight either. However, Mai could do one thing for Maki using her technique. She could create a weapon using all of her own and Maki’s little cursed energy. Since she was already at death’s door, she knew she would die once she uses her cursed technique.

Mai and Maki had a painful goodbye conversation in their hearts before Mai died. She took away Maki’s cursed energy but entrusted her with a curse in return to destroy everything.

There is no doubt that Mai’s death came along as an emotional shock. No, seriously, I took three days to recover from chapter 149. But, was it necessary to kill off Mai? Let’s talk about that.

The trope of killing off a character close to the main character as a means of motivation to the latter is quite common (*coughs* Nanami *coughs*) in shounen stories. But, Gege Akutami also likes to take out characters to raise the stakes in Jujutsu Kaisen, like Nobara (yes, I am a Nobara-is-alive believer), Masamichi Yaga, and Gojo.

In this list, chapter 149 added Mai’s name as well. In my opinion, Mai’s death was a crucial checkpoint for Jujutsu Kaisen, albeit I admit I had not seen it coming.

Her death turned true a speculation that the fandom had for a long time. There were hints all along that Maki will turn into a fighter like Toji, and they came to fruition. Right from the sword to literally becoming a shaman killer, Maki has finally touched the potential of her true self. I do hope, however, that she remains “Maki” for us and not a second Toji.

Even more than this speculation, there was another reason for Mai’s death. Mai herself said that according to jujutsu, monozygotic twins are one person. So, there is a natural limit to which each of these two halves can grow. For even one of them to grow beyond that point, both had to put their hard work. As long as the other did not work, it wouldn’t have mattered.

Mai had no ambition or desire to become a shaman since she was born. She was okay with being inferior, but that wasn’t the case with Maki. Mai knew how hard Maki worked to prove her worth, and eventually, she perhaps realized that she was the only hindrance in her growth. As much as she “hated” her for leaving her alone, she couldn’t see Maki beating herself up. As long as Mai was alive, Maki would have always been half-assed.

It was a huge emotional daunt for Maki, but it was necessary. She wanted to become strong enough so that the day she becomes the head of the Zen’in clan; she could create a safe space for Mai. But this dream crumbled into dust too soon. Nevertheless, it is hurtfully refreshing to see a “side-character” going through character development through such a hard-hitting death.

From a logical point of view also, I liked how well the execution of this death was. Twins being a curse and then showing how they are connected not just through genes but also growth as a shaman. Mai’s death broke a shackle in Maki’s mind that was maybe always holding her down.

I hope this essay drove home that I believe Mai’s death was justified!

There is a recurring theme in Jujutsu Kaisen of “deaths” changing the course of actions for characters, and on a magnified scale, the plot. Be it Riko’s death or Junpei‘s, each one of them became more than what one could decipher at one glance.

If it wasn’t enough for us to say it, the Zen’ins themselves attested that Maki is exuding a Toji-like aura now. I don’t even need to point out the weight Toji’s existence holds in Jujutsu Kaisen. He single-handedly turned the entire jujutsu world (and Japan) upside down. Could we see Maki having (even if not as much as Toji) a monumental impact on the story too?

Well, all this was to make my point that Mai’s death will probably have a pivotal impact on the story. The immediate effect unfolded in chapter 150 itself. Mai’s last words to Maki became the cause of death for most of the Zen’in clan. If that doesn’t bring a realization to you, let me rephrase it. Mai’s curse just nearly wiped out one of the three most powerful jujutsu families. Woah.

And this annihilation took place right before the Culling Game. So, what will be the bigger result of Mai’s death? Only time (and Akutami) can tell us. But, there is a high chance a butterfly effect will follow, quite possibly spreading to the other clans as well.

Of Mai’s life (and death) full of sacrifices

Let’s talk a bit more about Mai. As I said, Mai wasn’t a character fans usually list in their top favorites from Jujutsu Kaisen. However, when we analyze her a bit, we realize that she is a product of bitter circumstances. Her entire life and death, both were riddled with sacrifices.

Her sacrificial life began as soon as she was born. She was a woman of the Zen’in family, infamous for their mistreatment of women. The poster boy of this misogyny is none other than Naoya Zen’in, who took us on a deep dive into the Zen’ins from the first appearance.

It is almost as if Mai had already sacrificed dreams of her own. The only future she dreamt of was finding a place not beside but behind a man like Naoya. While I commend Maki’s choices, I don’t blame Mai for her choice either. Her personality and life had sacrifice coded so deeply in them that she didn’t have the guts to run away from it.

She was the one born with cursed technique, but even that wasn’t enough. Her technique was weak, and she did not even want it. But, her sister, without a cursed technique, declared she’d become clan head and ran away from home. As a result, Mai had to suffer a lot on her behalf as well.

Maybe she found solace in her death, though. Even that was a sacrifice, but at least it was for Maki. Maki was perhaps the first person who treated Mai with kindness. And she was the only person to accept Mai’s weakness and fear. In her last moments, I wonder if she thought that she was more useful dead than alive.

After all this, chapter 150’s panel with Maki and Mai effectively tore me apart as well. The illustration was the first and last time we saw Maki and Mai smile together. Now we will never see them together again. Mai’s end pained me a LOT. She wasn’t completely wrong in her choices and was more than we could see with the naked eye. What hurts a lot is that she remains a misunderstood character, only “redeemed” by her sacrificial death.

What do you think of Mai’s death? Did you feel sad for her too? Let us know in the comment box! 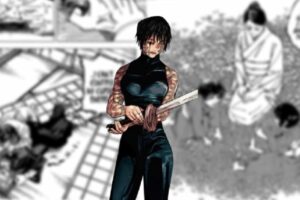 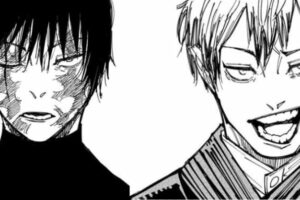 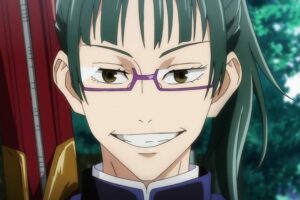