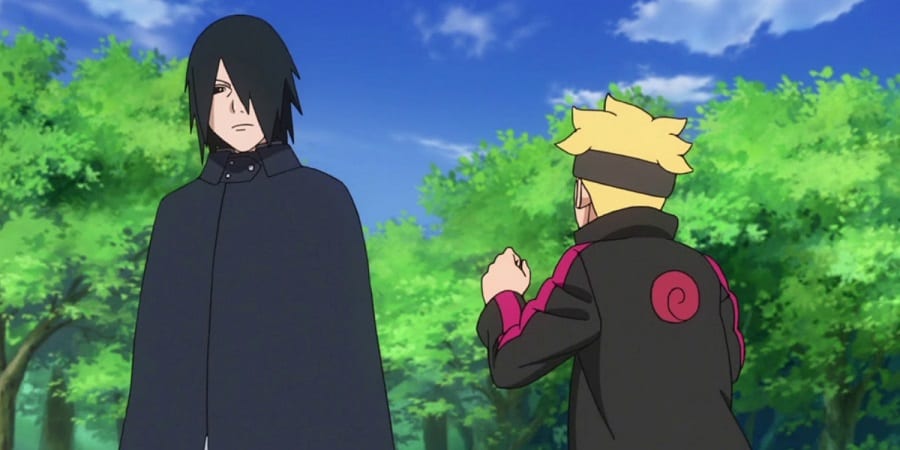 Boruto has always respected Sasuke, both as a human and as the “Shadow Hokage” of Konoha. It wasn’t a surprise when he asked Sasuke to become his master; they are quite similar, after all. Then, you must be questioning the article’s title; as it is obvious that Boruto would never do such a thing, or would he? Well, keep reading to find out did Boruto really stab Sasuke’s Rinnegan?

So, Did Boruto Stab Sasuke Rinnegan?

Well, yes. Boruto stabbed Sasuke in the left eye while the latter was checking up on Naruto after their fight against Isshiki. All of this happened in an instant; Sasuke’s eye was pierced by Boruto’s kunai as soon as he looked behind.

Now that we know that Boruto did stab Sasuke’s Rinnegan, another question remains; why would he ever do something like this?

Why Did Boruto Stab Sasuke?

You know that Boruto deeply respects Sasuke. In fact, he has a strong sense of responsibility and always tries to protect others; he even went against Isshiki to protect Sasuke, so why now? Why Did Boruto stab Sasuke’s Rinnegan? Well, the reason is Momoshiki!

Momoshiki suddenly took over Boruto’s body while the boy was unconscious and stabbed Sasuke in his Rinnegan eye.

All of this started when Isshiki paid his second visit to Konoha. Wait, who’s Isshiki you may ask? It’s the guy who placed the Karma Seal on Jigen! Kashin Koji attacked Jigen after the latter’s fight with Naruto and Sasuke, forcing him to resurrect inside Jigen. Because of this, Isshiki had only 24 hours to live; as Jigen’s body was frail. With Kawaki’s Karma gone, Isshiki has to create another vessel to survive; i.e. infest Kawaki with another Karma seal to guarantee his survival. So, he pays his second visit to Konoha.

As one would expect, Jigen couldn’t even see Kawaki! Naruto and Sasuke dragged him into another battle, and Boruto joined them too! Boruto used his Karma’s powers to teleport himself and Isshiki into a different dimension; forcing him to fight. There, Isshiki displayed his overwhelming strength.

To counter this, Naruto finally used his last weapon; the Baryon mode.

The Baryon mode grants strength and reflexes far surpassing any of his or Sasuke’s forms. Moreover, the Baryon mode also provides a power that makes him Isshiki’s natural enemy; the power to absorb one’s life force. Whenever Naruto comes in contact with any being; his body absorbs their life force. This is huge since Isshiki only has 24 hours to live; as his life force is frail in Jigen’s body. However, this ability comes with a huge price; i.e. Kurama’s life.

In the end, even Baryon mode wasn’t enough to take the Otsutsuki down! Nevertheless, Naruto did manage to reduce Isshiki’s lifespan to a mere few minutes!

With just a few moments of his life left; Isshiki had managed to teleport Kawaki into the dimension using Kawaki and Naruto’s chakra connection. He even used Naruto as bait for Kawaki! He said that he would spare Naruto’s life if Kawaki allowed him to implant a Karma seal.

Isshiki was able to implant the Karma seal onto Kawaki after the boy surrendered. As Isshiki was enjoying his victory, his body started to crumble; he was out of time. Suddenly, another Kawaki showed up from the back! There’s two Kawakis now! The boy bamboozled Isshiki into implanting a Karma seal on a shadow clone; finally putting Isshiki to rest.

Soon after, Naruto gained consciousness following his talk with Kurama for the last time. Just when things had begun to cool down, Boruto suddenly rushed in and attacked Sasuke! With this sudden attack, Boruto stabbed Sasuke’s Rinnegan.
However, Boruto didn’t do this willingly! Momoshiki took over Boruto’s body while he was unconscious.

Knowing that this is a rare opportunity;

Momoshiki tried to kill both Naruto and Sasuke but failed.

Nonetheless, he did manage to destroy the Rinnegan.

Boruto stabbed Sasuke’s Rinnegan after their fight against Isshiki. However, it was unintentional as Boruto was unconscious! Momoshiki took over Boruto’s body and made him attack his master. This was a heart-breaking moment, since harming people precious to him due to Karma is one of Boruto’s biggest fears.

So, what do you think? Are these nerfs to our beloved characters fair? How will this affect Boruto? Let us know in the comments below!