JJK chapter 155 builds up on the last chapter with a glimpse of Hakari's technique, Gojo & Nobara crumbs, and a small insight into techniques 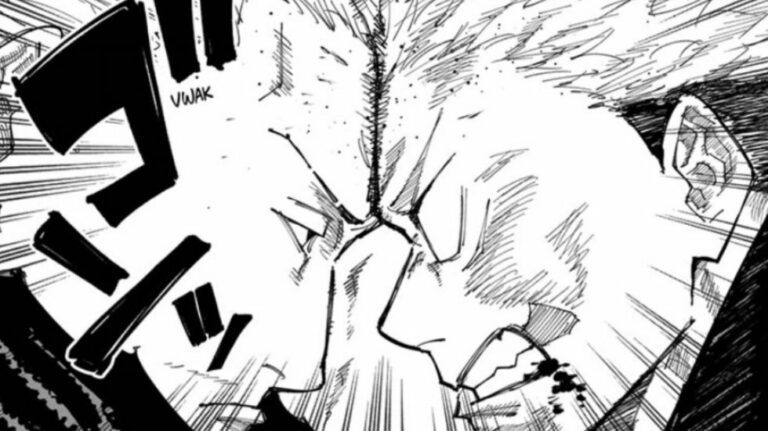 Another Sunday, another chapter; this time, it is JJK chapter 155 with more talk than action. This chapter is a build-up on the last one, with a glimpse of what is to come. And as usual, some teasers of new developments and surprise crumbs of our favorite characters from Akutami.

Without wasting time, let’s get into it!

Hakari’s atypical appearance sure goes unmatched with his very clichéd ideologies. What started off as a conversation initiator turned into a supposed life hack thing from Hakari to Itadori. Well, what he wanted to tell him and us is that he is very passionate about “fever.” Hakari defines passion as gambling and believes that life itself is a gamble.

Hakari’s little speech on how people just hate loss and not gambling itself was super predictable. If you have seen enough anime/read enough literature, you KNOW where a conversation about gambling leads to. Well, at least this standard rant did tell us Hakari’s goal as the fight club bookie. He wants to control the country’s passion.

Are you also a ??? like me. Let us see what he means in detail. With Japan in havoc, Hakari can seize the chance to expand his fight club. As more people pour in and support his ‘passion,’ the jujutsu society will also be pressured to accept the fight club. You can call it Hakari getting back at the jujutsu society that turned him into an outcast (more on that later).

As we saw before, Hakari wanted to write a ton of scripts with Itadori; he asked him to join. “Wanna get high on my fever” – what a weird way to say that, though. Hakari dude is suuuper sketchy; Megumi is never wrong.

Anyway, Itadori had the mammoth task of convincing this person without mentioning Jujutsu High, and he really just played into Hakari’s trap! Poor boy.

A struggle of persuasion & Gojo crumbs

How the hell can Gojo sabotage a bunch of things without even being in the story?! *bangs fist on table* Whenever we see Gojo in the manga now, it is always to show how he is his worst enemy.

Since Kirara figured that Hakari is in ‘danger,’ he called Hakari to alert him. This call led Hakari to (clearly) set a trap up for Itadori by asking him about Gojo. And like the dumbass innocent person he is, Itadori pretended not to know him. Yuji, that is how closeted weebs act like. Like seriously, even people who don’t watch Jujutsu Kaisen know Gojo.

Caught in a lie. And so began a brawl between Hakari and Itadori, not that we had not expected it. The beginning with Hakari kicking Itadori in the face was pretty reminiscent of Todo doing the same. Wait, did Itadori just acquire another brother? We will see. But let’s talk about the other side too.

Megumi and Panda were trying (like really hard) to persuade Kirara too. Using the stalemate of their fight, Megumi thought it would be best if he could convince Kirara that they did not have bad intentions. However, Kirara (and Hakari were just not ready to listen).

Like any normal person would, Kirara also believed that if anyone from Jujtusu High needed help, they would go to Gojo. Why was there a need to contact an outlaw? And on top of it, Megumi even said that Gojo is sealed. Nope, it did not make any sense from Kirara’s perspective.

It seems that while Kirara and Hakari know the big picture from the Shibuya Incident, they don’t know what actually happened. I mean, that is what happens when you are holed up in a room all the time. (Wait, why does that sound what an Asian mother would say?) Not going to lie; Kirara’s face of disbelief was iconic, though.

And he told us about something important:

Let’s go back to Hakari and Itadori’s fight. First things first, for someone stronger than Okkotsu, Hakari does not seem stronger than even Todo. Until now, that is. Todo supremacy is forever, just for the record. His strength, then, purely comes from his cursed technique.

JJK chapter 155 did a great job of teasing Hakari’s technique. It is quite unclear in the small glimpse, but there are theories about it already. Some people say it is Tatami mats, while some say it involves a guillotine. But there is one thing clear: the jujutsu higher-ups hate Hakari’s technique.

According to Kirara, Hakari had a huge dispute with the higher-ups because of the modernity of his technique. The grandpas of jujutsu are affectionate towards traditional models of techniques. As Panda explained, a technique like the Strawdoll Technique of Nobara is suited to their liking.

I apologize for my digression; OH MY GOD, WE GOT NOBARA CRUMBS! Is this a sign? Please tell us Nobara is coming back soon!

Coming back, techniques that incorporate modern elements like videos receive a cold shoulder. This example reminds me of Nanako’s technique. She could manipulate the subject of photographs using her phone.

So, now we finally know what the whole suspension was about. But this belief is so stupid? How can a shaman control what elements their technique involves? Not that whatever they say makes sense anyway.

Well, next week we will see Itadori fight Hakari! The head butt was awesome, but they really need to get out of that room if they don’t want to destroy everything to pieces. We will also probably see a full explanation of Hakari’s technique.

Until then, tell us how did you like JJK chapter 155 in the comments! See you next week.