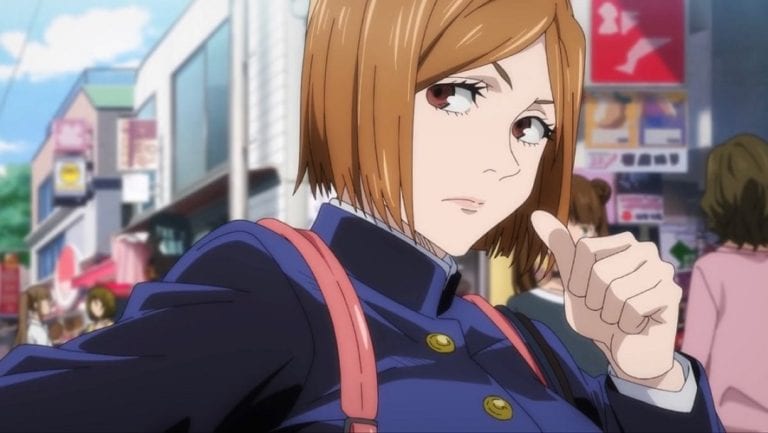 Nobara Kukisagi is a very beloved character by Jujutsu Kaisen fans because of her funny and badass attitude.

She is also a character with a plethora of potential for character development. Her back story has also piqued all of ours curiosity.

However, during the Shibuya Incident arc, catastrophe struck Nobara.

In the recent chapters, she is not visible either. It makes our belief stronger that something untoward has taken place – most possibly her death.

This idea leads us to the question:

Contents hide
Is Nobara dead?
Why we feel she won’t die:
An interesting theory about Nobara from Reddit

The simple answer is no, Nobara Kugisaki is not dead. It has not been confirmed, and we don’t think she will die just yet.

In the Shibuya Incident arc, she engages in a ferocious fight with Mahito’s double. She manages to injure the double during the fight.

This sends the double impact to the original Mahito, fighting Itadori Yuuji elsewhere.

He realizes that Nobara figured out his double’s inability to use Idle Transfiguration.

Both of them take a chance to escape and switch bodies for two reasons.

One, for Mahito to take advantage of Nobara being off-guard about his ability, and two, killing her in front of Yuuji to crush his soul.

Yuuji realizes the danger too late, and Nobara ends up taking an attack on her face from Mahito.

She reminisces about her past with Saori and her Tokyo Jujutsu Tech friends before falling prey to Mahito’s ability.

However, it is not shown that she has died.

And taking into account the complexity of Jujutsu Kaisen, it is entirely possible that she is not dead. Even Nitta, who healed her wounds, said that Nobara’s chances of survival were not zero.

But, our hopes of seeing Nobara again might have dwindled after chapter 144 came along.

Itadori reluctantly touched upon the difficult topic of Nobara’s condition. Megumi and his conversation poured cold water over our expectations of seeing Nobara anytime soon.

Yet, we aren’t certain what the truth is. What could Megumi’s silence entail? We can consider two meanings of his silence.

Nobara is either actually dead, or she is just in a critical condition that she hasn’t woken up yet.

We really, really hope the latter possibility is true because we don’t want her to die so soon! Well, we might be living in delusions, but we feel she won’t die yet.

Why we feel she won’t die:

We don’t think Nobara has died. Instead, she will probably be in a critical state for a while and return donning an eyepatch. There are reasons for this.

As stated before, Nobara is a well-liked character by the fandom. Akutami-sensei sure is ruthless about killing characters, but it is certainly not mindless killing.

The mangaka kills the characters only when their narrative potential is exhausted, like Nanami.

His death contributed to the building up of Mahito’s character as a villain and breaking Yuuji’s resolve (initially atleast). But Nobara’s death will add to up to nothing significant.

It will instead be a waste of an amazing arc, and we all know Akutami-sensei is much better than that. Add to that the fact that we haven’t seen her entire character development yet.

She still has to reunite with Saori and Fumi. There is also a high possibility that we will see Nobara come through in the Culling Game.

Will Saori or Fumi be revealed as players in the game? Who knows? At the very least, we can speculate that her reunion with Saori might occur in the next her.

It will also be pretty interesting to see Nobara, someone who takes pride in her appearance, come back with a scar on her beautiful face.

Of course, there are also many other possibilities, but here’s a theory we came across that is pretty psych.

Reddit user Hounds_of_war pointed out a few fascinating points in their theory (which you should check out). This section is a TL;DR of the theory.

It is possible that Nobara’s injury was actually self-inflicted. She knew how Mahito’s cursed technique worked as she even figures out the weakness of Mahito’s double.

So, even if Yuuji was a little late in warning her and she was affected by Idle Transfiguration, her best bet was to stop it from spreading to other body parts.

The paneling around this section is a bit distractive (with huge empty spaces) as if concealing what Nobara is holding in her hand.

We also know that she has an incredibly high capacity to bear pain from her battle against Kechizu and Eso. In a moment of clarity, she took that slim chance that might even end up killing her.

It is also not an out-of-the-box idea because Todo cut off his hand to stop Idle Transfiguration from spreading too.

This leads us to speculate that Nobara might also realize her hidden potential of using cursed energy to heal her eye.

In short, we don’t think Nobara is dead. But she might come back with a nasty scar on her face, and maybe even an eye missing. What do you think? Is Nobara dead? Let us know!