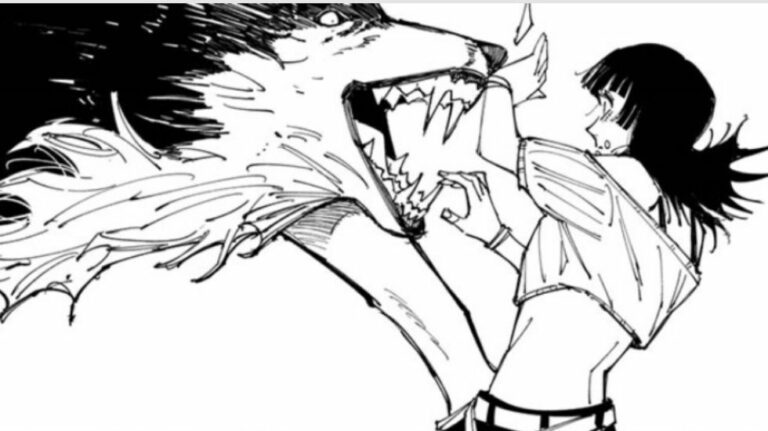 This week’s chapter is another amazing one, bringing back the fights we absolutely love. Megumi and Panda might be from the main cast, but this chapter’s star was Kirara Hoshi!

Let’s find out why!

Contents hide
You might meet God but not Hakari Kinji!
Kirara Hoshi, the wild (truly) card.
Who was recruiting whom?

As we had seen last week, Panda somehow miraculously appeared at the venue of recruiting Hakari. And like the clever person (?) he is, he found Megumi, who was playing hide and seek.

It seems like Panda is really good at that because he even tracked down Hakari’s location. What was surprising was that Panda had already TRIED to meet him.

However, he had failed because he just couldn’t reach him. In a mysterious way, the distance between him and the door to the monitoring room remains constant. The illustrations are really cute, aren’t they?

This predicament slightly reminded me of how Mei Mei and Utahime were stuck in a never-ending corridor in Hidden Inventory. Panda even compared it to Gojo’s technique. But it turns out the culprit was Kirara Hoshi’s cursed technique! More on that later.

Hakari and Kirara were always together on the roof. It made it impossible for anyone to meet Hakari without his permission, let alone Panda. Poor Tengen, he would have loved having this skill. Also, all of Mahito’s victims.

But there was a catch. With Itadori successfully impressing Hakari in the last chapter, he had a chance to meet Hakari. If they could meet, there was a high chance of persuading Hakari.

But Panda and Megumi don’t trust Itadori to succeed on his own because he can’t lie to save his life. A PRECIOUS BOY is what Itadori is, okay? When I tell you Panda & Megumi are like my friends, SMH.

Megumi came up with the worst scenario: Itadori is from Jujutsu High without getting a chance to talk. And to keep that from happening, they had to stall Hakari’s underlings and buy time.

Hence, both of them placed their best bet on Itadori and charged in. They didn’t know what, or rather, who was waiting for them!

Undeniably, Kirara Hoshi was the star of JJK chapter 154. If you didn’t get the pun, worry not. Kirara Hoshi means “beautiful star.”

But, uh, before we go further, apparently Kirara is a male? Wow, that was a surprise, Panda (Akutami-sensei, I am looking right at you).

The fandom was speculating that her technique had something to do with his name, too. But while we still don’t know the what or how of his technique, we did get to see it in action!

Megumi and Panda infiltrated Hakari’s lair to take down the low-level shamans guarding it while Kirara was escorting Itadori.

FINALLY. Can we talk about how COOL Megumi’s ability to be in the shadows is? I know I said this in the last chapter review too. But, seriously!

The way he took out the sorcerers without them even noticing it was KAKKOI. And with every kuudere, there has to be someone kawaii. What better to fill that role than a Panda?

In the last chapter, Panda was going to complain to animal welfare, and in this chapter, he nearly became a soft toy. Well, a good technique to take out his opponents, HA.

Unfortunately, both of them ran into Kirara at the last moment. Kirara connected the dots pretty fast and realized that all of them were from Jujutsu High.

He had already marked Panda (everyone loves the tushies of pandas, don’t they?). And thus began a quick but fascinating fight between the three of them.

Megumi tried to take the first mover’s advantage and unleashed Divine Dog. However, much to our surprise, the Divine Dog was replled! The shikigami could not even get close to Kirara.

Megumi and Panda split up to stop her from reaching Hakari. But Kirara’s technique made it so that he could not get closer to Kirara nor go away from Divine Dog!

What a weird cursed technique, but an interesting one at that.

I believe it really has something to do with stars because not only do Kirara’s eyes have stars, but even the “mark” has a star.

It might be something like being able to manipulate the “orbit” around a target or themselves. Then it would make sense that one can never enter Kirara’s desired orbit once they are marked.

This speculation might be completely wrong, but we will come to know the working of this technique soon enough.

Who was recruiting whom?

Well, well. Our favorite boy and the man of the moment have met each other while all this was going on.

Megumi and Panda think Itadori’s cheerfulness (where he finds all of it after Shibuya is beyond me, I am still in pain) might actually work. With a little instruction from Megumi, we hope Hakari can cooperate with Itadori.

But before anything else could happen, Hakari said a pretty surprising thing. Itadori can earn a MILLION yen by working one hour per day at Hakari’s.

Wow. I felt that surprise Itadori went it after hearing that, LMAO. Cut to Jujutsu Kaisen ending because Itadori decided to turn into an abnormal salaryman. Nanami’s dream of Malayasia: successfully fulfilled.

Jokes aside (take that job Yuji), I am wondering if we will see Hakari’s technique next chapter when he comes to know Itadori is from Jujutsu High.

If Kirara has such a great technique, even Hakari must have something remarkable up his sleeve.

With that, another chapter came to an end! What are your thoughts on JJK chapter 154? Did you enjoy it, and what do you think is Kirara’s technique? Comment below and let us know.