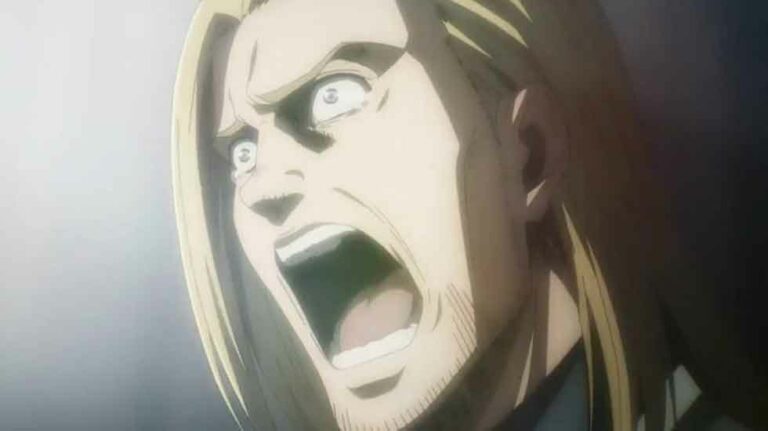 Was there any better way to kick off the New Year? Despite a two week break, Attack on Titan: The Final Season’s Episode 5 “Declaration of War” was the best gift we could’ve asked for. That’s it, thanks for reading (: .

All jokes aside, Studio MAPPA did a fantastic job in adapting the most crucial scene of the Marley Arc into a mere 20 minutes. Moreover, the voice acting was insanely good! It won’t be an exaggeration if I say that this is one of the most iconic episodes in anime history.

The episode starts with young Reiner, Annie and Bertholdt talking about the village man they met. While discussing why he hung himself, Bertholdt says a wise thing- the man hung himself because he wanted judgement for his actions.

The scene beautifully cuts to a shocked Reiner standing in front of Eren. This foreshadows a scene where we see Reiner at his lowest.

The beginning of the end

On to the present, Willy Tybur is backstage, trying to calm his nerves before he goes on stage. Lady Kiyoomi comes to pay him a visit, praising him for his nerves and how “brave” he is, before taking her leave.

In the basement, Eren convinces Reiner to sit down for a heart to heart. He also encourages Falco to stay back and listen to what he has to say. Eren cryptically points out that they sit beneath a residential building, and shrugs off Falco’s concern for the “scratch” on his hand.

Karina Braun meets Mr. Leonhart as she goes to find a seat. Turns out, Mr Hoover already passed away, and the focus of the conversation shifts to their children. Before Karina could assume that Annie died a brave death, he confidently tells her that she’s alive, and will come home.

The warriors and candidates alike take in the new ambience, as the trumpets start to blare to commemorate the beginning. Simultaneously, Commander Magath keeps an eye out on the activities below.

That is when the remaining warriors are taken away by a certain soldier.

The atmosphere in the basement remains intense. Reiner questions Eren’s intentions, to which he replies he’s here to do the same thing as Reiner. Reiner immediately starts to break down as realisation hits him, while a confused Falco watches on.

Willy Tybur starts out with the same old Marleyan propaganda of Helos and how he brought upon the end to the “evil” king who fled to Paradis. Here, Eren starts to coax things out of Reiner, asking him whether this was the reason why he broke down the wall. We see Reiner ascending into a more delirious state.

While Zeke is sent a different way, the solider leads to Porco and Pieck to another place. Pieck points out the soldier’s beard, almost as if she’s wondering something. On the way, she greets the Panzer Unit with love before continuing on her way.

Ironically, while Magath wants the details for everything, Porco and Pieck are tricked and trapped into a ditch that would prevent them from transforming and escaping. Clearly, things are getting fishier, and it becomes obvious that Eren is about to pull something off.

Observant Falco strikes again, wondering why Reiner looks so scared. He puts the pieces together quick, coming to the conclusion that Eren is, in fact, from Paradis Island. We can’t help but start to feel bad for poor Falco already. After all, he was just trying to help some friends reunite!

Willy Tybur drops a big truth bomb on the world: the story told for a century was wrong. He then narrates the truth, and how its King Fritz who ended the war by moving away peacefully. He further elaborates on his vow of renouncing war, and how his peaceful ideology has been passed down the generations. Therefore, Willy refutes all claims about the King unleashing titans onto the world if threatened.

He further shares crucial information: the King, and hence the descendants, would fully accept if Marley was to ever take the Founding Titan and destroy Paradis. This makes it clearer why the Reiss family remained huddled in the cathedral while Grisha Jeager confronted them for not doing anything.

As people question why Paradis is seemed as a threat, Willy further clarifies that a rebellion has taken place inside of the walls. While this goes on, Magath sends a team to look for the missing warriors.

Willy Tybur reveals that Eren Jeager has stolen the Founding Titan. At the same time, Eren wills his body to regenerate, and his chopped foot starts to heal. Falco, understandably, looks horrified. He is distraught that Eren used him for sending letters.

Eren tells him that they went to his friends, and Reiner’s reaction confirms our thoughts: the Survey Corp is around. Eren then begins his tyrannical advance on Reiner. Calling Willy Tybur right, Eren says that “he is the bad guy” who “might just destroy the world”.

Eren then talks about how he thought of Reiner and company as bad people as their actions led to the death of his mother. Eren excruciatingly interrogates a broken Reiner, who tells him that his mission was to see how the King would react to the chaos and to ultimately save the world.

Reiner then recalls Eren’s threat of having them killed in the most brutal way, but Eren just shrugs it off. This truly shows the development of Eren from a hot headed boy to a conspirator who can break the already brittle psyche of the person sitting in front of him. A dumbfounded Falco has no choice but to hear them out.

Eren then lists out his experiences in Marley, finishing by saying that he, and Reiner, are the same. While acknowledging that people around the world were same, he points out that it’s the propaganda instilled in young kids in Marley that ultimately sets them apart a little.

The segment where this episode gets GOATed (in other words, the declaration of war and Eren’s transformation)

Eren hits a sensitive spot by asking Reiner about how he’s suffering, and Reiner falls onto the ground, telling Eren that it was his fault that Paradis suffered such fate.

Willy continues with his speech, saying that he curses his own blood. He wishes for his own race to die. Reiner, too, wishes to be killed.

At the same time Willy says that he is not ready to die yet as he was born into the world. Eren’s eyes widen, and we realise that now there is no going back for him. Willy calls for the world’s collaboration to get rid of Paradis, and Eren has a sombre smile on his face.

Eren again comments on his similarity with Reiner, helping the delirious man up. He states that they were born this way. As Willy declares war, Eren affirms that he will keep moving forward, until he destroys his enemies.

Eren begins his transformation and Reiner pulls away to protect Falco. As Willy screams the declaration, Eren transforms and destroys the residential building, finally emerging with an angry roar.

Destroying the theater and leaving the people appalled, Eren kills Willy Tybur and eats him.

Glad to have you back, Eren Yeager!

This episode was definitely overwhelming in the best way possible. Honestly, we could not ask for a better adaptation of such an important part of the story. Taking out the carriage scene was a good decision, because it can definitely be adapted with more focus on it. Studio MAPPA did a fantastic job with the pacing of the episode, and managed to establish a great flow of events.

The voice actors were simply phenomenal. We can hear the pain in Reiner’s voice, the betrayal in Falco’s, and resolve in Eren’s. While many were dissatisfied with YOUSEEBIGGIRL not being used for Eren’s transformation, this theme was a refreshing theme and the scene gave chills regardless.

This is from where on the Attack on Titan turning more morally gray. Can you blame an anguished Eren, or a young, brainwashed Reiner? Regardless, Falco’s actions not only made for great memes, but we can’t help and sympathize with how his kind heartedness was used.

Attack on Titan broke the internet once more, and we hope it continues to with the rest of the season. Beware anime onlys, some great stuff is coming your way!

1 thought on “Attack On Titan Season 4 Episode 5 Review: A Declaration Of War Indeed!”