Attack On Titan: What Was Willy Tybur’s Motive? 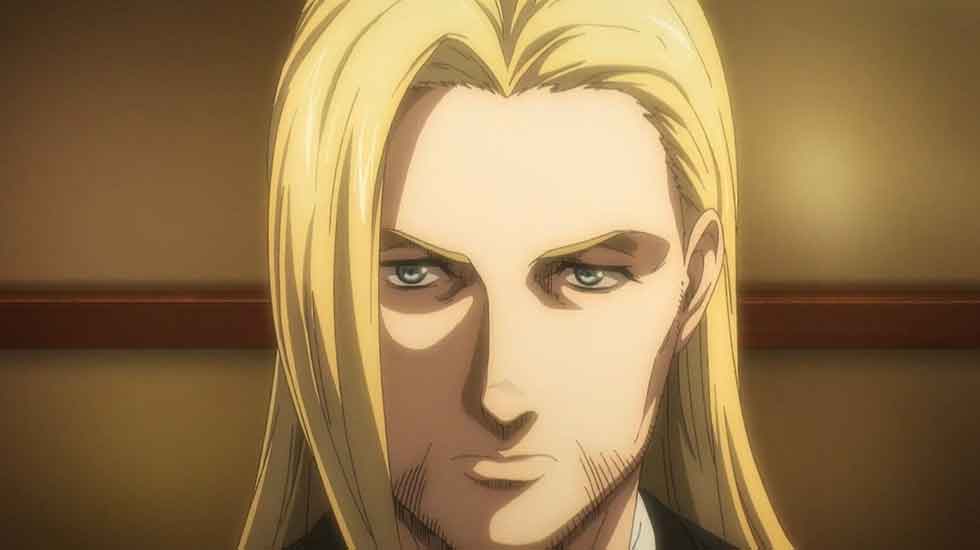 The Tybur Family is an Eldian noble family in Marley that possesses the War Hammer Titan. Willy Tybur, the head of the family, was revealed during the Marley arc (Episode 4 for Attack of Titan Final Season). He is someone who has great influence over Marleyan politics. So, when he drops in unannounced to meet commander Theo Magath it raises a lot of questions in our minds.

Unlike many characters that are shown in the series, Willy seems to be wanting the best for both Marley and Eldians. (Strange?) Why? He does reveal that memories of the War Hammer Titan are passed down to everyone in the Tybur family. Hence, he knew the truth of what had happened in the past. And after learning the truth, he felt guilty about his family’s non-interference. He felt it was the fault of his ancestors that Marley and Eldians were suffering.

But, from what Zeke said in his meeting with the Marley warriors, Willy Tybur was going to give them a narrative to take down Paradis Island. In fact the festival that has been planned in Liberio, serves this very purpose. If Willy really cared about bringing the best for both Eldians and Marleyans, why would he give a reason for all nations to destroy the homeland of his own race. But what did he try to achieve by doing so?

What were Willy Tybur’s motives? Why did he find it necessary to wage war on Paradis, if he cared about saving both Marley and Eldia? Well, the answer is a bit complex. Do read it till the end to get a complete picture.

The following blog contains spoilers from the Marley arc of Attack on Titan. Read ahead at your own discretion.

What are Willy Tybur’s motives?

Basically, Willy had two aims or motives: to restructure the top brass of Marley’s military and improve the condition of Eldians on the continent. While he talked about saving the Eldians, it was about Eldians who were ostracized and oppressed by Marley and other countries around the world, not Paradis. Why the discrimination Willy?

In his meeting with Magath, he says as much. Willy felt that the current situation, i.e. Marley’s expansionist attitude and the poor situation of Eldians was because of the inaction of his ancestors. Therefore, through his actions, he tried to correct them. The festival at Liberio and Willy’s speech during this festival was his way of changing the current situation. However, there are also some inconsistencies with his words and actions. After all, its not Attack on Titan if there isn’t a catch to the story, right?

Before we explore his motives in detail, it is better to understand the situation in Marley currently. We see that spies from Paradis are there on Marley to carry out some plan of theirs. Also, Marley needed to change its expansionist policies desperately. Keeping this in mind, let us read ahead.

Though the policy of non-interference was still in place, the Tybur Family was ruling Marley through the shadows. Willy was concerned that Marley was on a path of destruction due to its expansionist policies. Fresh out of the war, it was becoming obvious that nations were getting ready to strike back at Marley. Since he knew the truth about the past, it would be safe to assume that Willy spotted Marley repeating the mistakes of the Eldian Empire. He wanted to change this situation.

Therefore, he turned to Theo Magath, who according to Willy was the best man for the job. He was more level-headed, practical and not blinded by hatred for Eldians. In Willy’s eyes, he was the perfect pawn to achieve his goal. But to put Magath in charge, he had to remove the obstacle, the old guard, the dignitaries, who controlled the military might of Marley.

Here is where we see Willy’s genius. Knowing that there were Paradis spies in Marley, Willy planned with a hypothesis: the enemy will attack, and they need to act accordingly. He revealed as much to Magath too. They planned the festival in a way that these enemies will be forced to attack Marley. Not just that, they would also smoke out the rats within Marley who aided them. He was going to use the dignitaries as traps to lure them in. They would be martyrs in the enemy attacked and simultaneously Marley would be rid of them.

Who Is Yelena? Does She Like Zeke In Attack On Titan?

But if restructuring is what he aimed for, where does waging war on Paradis fit in? Well, this is where saving the Eldians on the mainland comes in.

Aim 2: Saving Eldians on the continent

Upon learning the fact that Marley had nothing to do with the ending of the Great Titan War, Willy was disturbed. Naturally, the story about Helos being the saviour gave Marley the excuse of committing atrocities against Eldians. There was no Marleyan supremacy.

He wanted to prove that peace-loving Eldians had existed, and still do. But the only way he could fight for that cause was by using everyone’s hatred for Paradis for his gain. He planned to reveal the truth about the Great Titan war and how King Fritz himself was responsible for bringing peace to Marley.

To atone for the lack of action from the Tyburs, Willy took it into his hands to improve the condition of Eldians. He wanted to affirm that all Eldians were not bad people. For this plan to work out he needed two things: a sacrifice, and a punching bag. Any guesses for the latter?

Willy wanted to use the festival as a way to explicitly show that even history proved that good Eldians exist. But simply stating the history won’t bring any change in the outlook of people for the Eldians in the internment zone. For this, he needed to show that these Eldians around the world too were on the same boat as the other people. That they too were threatened by the devils on Paradis.

Willy Tybur also seems like a man who understood the value of a good drama. His theatrical performance to gain sympathy for the Eldians on the continent would be more successful with the concept of martyrdom.

Did Willy Tybur Make Sure That Eren Will Keep Marching On?

He told Magath in the carriage on the way to the festival that to make sure people listen, it’s key for Willy to actively take part in this. If required, he would also have to die for his aim. He planned to use his death and the death of Eldian civilians along with the officials as a sacrifice. By declaring war on Paradis, Willy made sure that the enemy forces on Marley (read Eren) would attack the declaration to buy more time for themselves. He lured them in by offering the heads of the dignitaries in a platter.

The death of these groups at the hands of Paradis forces would prove to the world that true evil resides in Paradis, as they didn’t even spare their own race on the other side of the ocean.

The inconsistencies in Willy Tybur’s motives

There is no denying that Willy Tybur was a smart man. He managed to use the enemy for his own benefit. However, there are some questionable instances that make us wonder what Willy really wanted.

In his speech, Willy clearly established Karl Fritz as a man who wanted peace. Not only that, he also admitted that “Helos” didn’t exist and the Tybur Family, despite siding with Marley during the Great Titan War, conspired with Karl to end the battle and fabricate a story to please Marley.

By mentioning so, Willy made it look like even the Paradis Eldians were siding with peace. Even the people in the crowd were almost convinced by what Willy said. Why attack Paradis and have countless unknowing Eldians die? Was Willy ready to use more innocent deaths for a greater cause?

Why declare war when you know the consequences of rumbling?

A not so smart announcement from a very smart man. Why declare war on Paradis, knowing that it would trigger rumbling and flatten the earth? Everyone present was made aware of the fact that they don’t possess the technology to counter millions of Colossal Titans.

It makes everyone question why Willy would encourage the world to fight together for what seemed like a hopeless cause. Why leak the information about titans in the walls? For all we know, Willy could have felt that wiping humanity out and starting afresh was the best option.

Was this Willy trying to warn the world and let it know that the cycle of hate has finally entered its last rotation? No matter how many times its read, his speech remains baffling.

In conclusion, Willy Tybur wanted to “turn the wheel” and correct the mistakes of his ancestors. He wanted to get rid of war mongering Marleyan officials and actively appeal to the world about the innocence of Eldians on the continent. Yet, there seems to be underlying intentions behind his actions, as many actions and words fail to match up.

Do you think Willy Tybur was cryptic, or do you think his aims were just straightforward? Let us know in the comments!

The Great Titan War In Attack On Titan Explained!

Attack On Titan: Why Did Eren Attack Liberio?