Attack On Titan: Why Did Eren Tell Reiner They Were The Same? 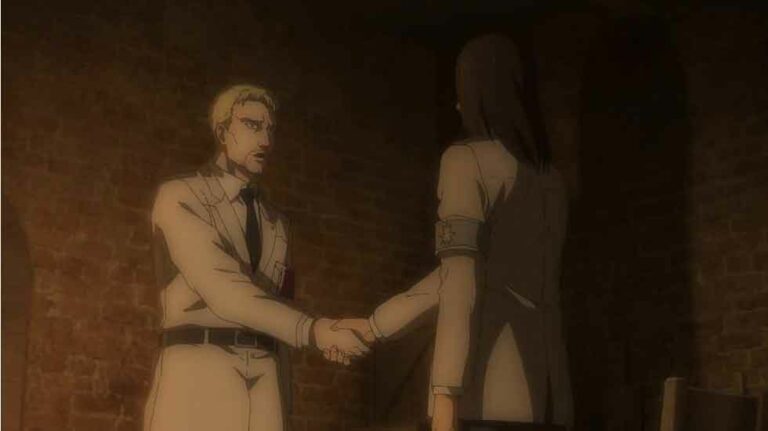 In the latest episode of Attack on Titan Final Season, Reiner and Eren have a melodramatic confrontation in the basement. With Willy’s rousing speech playing in the background, this was one of the most defining interactions between two characters in Attack On Titan.

Reiner was visibly shocked to see Eren in Marley; even more so when the latter mentioned that he had sent letters out to his comrades using Falco. Not understanding what he was upto, Reiner asks Eren if he was here to destroy his enemies. Surprisingly, Eren says that was not the case. He had come to sympathise with the people on the other side of the ocean. Eren had come to the conclusion that people were the same everywhere; inside the walls and outside them.

Just when we thought Eren was going to have a peaceful(yet tensed) reconciliation of sorts with Reiner, the vice chief had a breakdown and Willy declared war on Paradis. This completely changed the scenario as Eren then proceeded to attack the festival at Liberio and eat Willy. But before doing so, he mentions a peculiar dialogue to Reiner. Eren says that they both are the same.

Contents hide
Why did Eren say that he was like Reiner?
Eren’s changing state of mind!

Why did Eren say that he was like Reiner?

Eren told he was the same as Reiner because both of them were pushed onto a path where they were forced to do things that they did not want to do. For Reiner, it was the Paradis operation; while with Eren, it was the attack on Marley and the subsequent killing of innocent citizens.

Before he came to Paradis, Reiner, like every other Eldian on Marley, believed that they were descendants of the devil. He took up the mission to retake the Founding Titan so that he could defeat these so-called devils on the island. He desperately wanted to succeed and become a hero so that he and his mother could have a better life.

But on reaching Paradis, Reiner realises the truth. There were no devils to be found on Paradis. In fact, for the ones on Paradis, Reiner was a devil. His actions caused a lot of innocent unsuspecting people, including Eren’s mom, to die. After all this, Reiner probably came to the same conclusion as Eren. People are the same everywhere.

This guilt was eating away at Reiner from the inside; to the point that he developed a spilt personality. By the time we reach the events of Attack on Titan Season 4, it is clear that Reiner is clinically depressed and has suicidal tendencies. He is looking for someone to pass judgement on him. He probably wants to scream at the top of his voice that he was wrong.

This is a feeling that Eren could sympathise with, as he experienced the same thing when he spent time living under the roof of his enemies.

The following part of the article contains spoilers from the Attack on Titan Manga which has not been adapted yet. Read ahead at your own discretion!

To understand Eren’s state of mind, it is important to understand the chronology of events. Before Eren met with Reiner, he had come to Marley with the sruvey corps aided by Hizuru. They were supposed to listen to the Association of Protection of Ymir’s subjects. But as diplomacy failed Eren decided to go ahead with his plan. What was this? Killing all people that lived outside the walls.

Eren had zeroed in on this plan after knowing the true extent of Zeke’s plan for Eldians; and also partly because of the future memories of the rumbling he obtained. He was sure that he would carry out the rumbling at some point in the future. So he decided to go ahead with genocide. However, after meeting with people in Marley, especially Ramzi; and seeing that they were no different from the ones on Paradis; Eren realised that he lacked the willpower to go ahead with genocide.

He came to understand how Reiner might have felt. Eren knew he was going through a similar phase mentally. They both had half-ass determination to carry forward the job that they had agreed on doing.

When Eren met Reiner in the basement, he had almost given up on killing everyone. He probably would have kidnapped Zeke and looked for a differnt solution. BUT, Willy ended up triggering him with the declaration of War. That’s when Eren realised that everything was written in stone. Even though he willed to change the future, he would be forced to walk down a pre-set path. This explains his smile shown below!

If Eren had not attacked the festival on Liberio, the alliance soon would have landed with their weapons on Paradis, risking the existence of the island altogether. He was forced to take action. Eren comes to terms with what he had to do, keep moving forward till his enemies were destroyed, even if it meant trampling on the lives of millions of innocents. This predicament was similar to Reiner’s. And that’s why Eren said they both were the same.

What are your thoughts on the confrontation between Eren and Reiner? Let us know your opinions in the comments section!