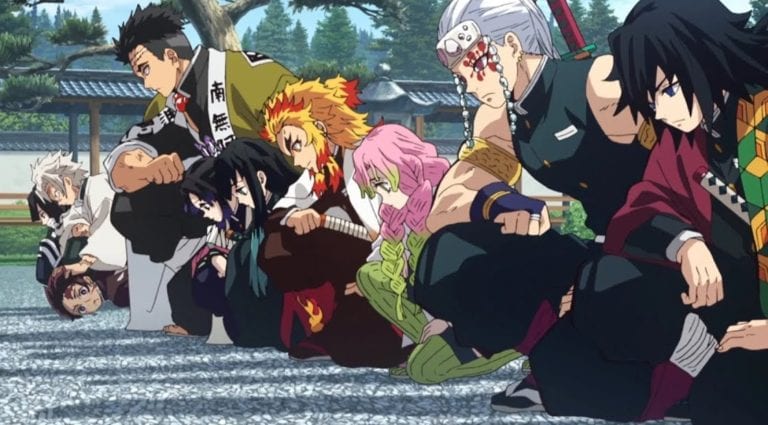 With Demon Slayer manga ending this year. It has led to many revelations related to its characters. It has given us more insight into them, including their personalities and power levels as well.

Based on it we are bringing you the 5 Strongest Hashira in Demon slayer.

Take it with a pinch of salt as it’s not really possible to answer who is truly powerful and who is not. If you’ve read the manga you’ll understand why it is so.

Most Hashira fought the upper moon demons in one vs many battles, so sometimes individual power levels can be hard to gauge.

So we will be listing them down on the basis of their survival rate and their final battle opponents. We will list down the top 5 for you and the reason behind why he or she is there.

Also, Spoilers ahead. Read at your own risk.

The first person in our list of strongest Hashira is Giyu Tomioka. He is the very first Hashira from demon slayer corps we encountered in the series.

He is a proficient Water Breathing style user. Giyu has mastered it to the point that he was able to innovate and add an extra form in the Breathing Technique.

During his fight against the upper moon demon number 3, Akaza, Giyu was able to hold on his own for a pretty long time. He was also able to induce loads of damage on the demon.

He had the responsibility of defeating the demon along with protecting Tanjirou.

When Tanjirou was knocked out during the fight Giyu was able to hold back the demon from advancing ahead. He fought so valiantly that the Akaza offered Giyu a chance to cross over to their side and become a demon himself.

In the final battle against Muzan, Giyu provided immense aid and was one of the few demon slayers who survived the battle. In the end, when Muzan took over Tanjirou’s body Giyu was the only one ready to kill Tanjirou to end the demons’ onslaught.

Sanemi was introduced in the anime as a heartless person who hurt our beloved Nezuko.

We still hate him for that. But as a fighter and swordsman Sanemi was considered one of the strongest amongst the hashira. His wind-style breathing technique provided his already battle-hardened body an extra boost.

His physical strength, his determination, his guts and the motive behind him becoming a demon slayer were some of the most strongest and intriguing parts of the story.

During his fight with the upper demon moon 1, Kokushibo, Sanemi provided immense support and his attacks proved to be one of the most damaging attacks on the top demon moon.

His blood also consists of a special drug that immobilizes a demon. So the more he was cut the more effect it had on the demon. Although a double-edged sword it did prove effective.

In the final battle against Muzan, Sanemi with his rage, determination, and revenge to kill Muzan, was one of the most decisive factors.

This proves without doubt that he was one of the strongest Hashira in the Demon Slayer corps. He was also one of the survivors of the final battle.

In her first appearance, the lovely Mitsuri is shown to be a funny, kind, and childishly confused person. She’s all about love and fun when she’s just being herself.

But when the time comes to eat or battle, she does a total 180° flip. Being born with a special condition that enhances her muscles, she’s physically the second strongest person on the list.

Her normal strength exceeds that of a full-grown man. Combined with her breathing style she becomes a total monster in strength.

Despite her strong muscle build and physical strength her flexibility and agility are her stronger points.

During her battle with the upper demon number 4, Hantengu, she was able to tank all its attacks from all of its emotional summons and was able to beat almost all of them alone.

She was also able to take on the most powerful attack of the demon emotional summons when combined together into a new form, Zohakuten.

If the last attack wasn’t that of immobilizing one’s body. She easily could have defeated them. She was fast enough to evade all attacks of Hantengu at point-blank ranges.

Her blade itself is designed like a whip to take advantage of the physical gifts such as her strength, agility, and immense speed.

In the last battle against Muzan, she fought against him using her instincts and sword fighting skills. Her speed though wasn’t enough to keep up with Muzan.

But with her physical strength, she was able to hold down Muzan entirely without the use of her sword or Breathing Techniques. She also ripped off Muzans’ left arm completely with her bare hands.

This alone is enough to feature her in the list of strongest Hashira. Also, OPPAI IS TRUTH.

Iguros’ introduction was that of an extremely rude person who was in favor of Sanemi. But as time progressed he proved to be one of the kindest, if he likes them.

His skill as a swordsman is in a league of its own. Proved by the fact that during the training for new recruits he was the one selected to teach them sword fighting.

Despite being considered physically the second weakest hashira, above only Shinobu. His skill in sword and using breathing techniques are well known.

His determination to kill Muzan was so strong that even though blinded by Muzan and injected with his blood, Iguro kept fighting and dealt huge damage to Muzan.

This same attack was used on Mitsuri who was physically much stronger than almost everybody in the organization. She was left immobilized for almost half the battle.

After getting blinded, his snake, Kaburamaru, who could sense and see Muzan was relaying positions to Iguro and continued their fight. If that’s not cool then we don’t know what is.

He kept on fighting along with Mitsuri until Muzan was killed. Eventually, laying down his life along with the woman he loved.

When Tanjirou and Inosuke first saw Gyomei they could sense that he was in a league of his own. He is without a doubt the strongest hashira until now.

This is proved on multiple occasions such as the new recruits being sent to him for physical and mental strength training.

He was able to push back Upper moon demon number 1, Kokushibo. Kokushibo said that he hasn’t fought a warrior of Gyomei’s caliber in the last 300 years.

He later gained the mark along with the red nichirin ax during the fight and was able to get away with only minor injuries. This alone proves his mettle.

He is one of the demon slayers who became a hashira only after two months of joining. The only other demon slayer to come close is Muichiro Tokito.

During the final battle, with Tamayos’ help, Gyomei was able to behead Muzan. Due to his leg being chopped off and losing lots of blood he was left out from most of the battle.

But he was one of those who fought Muzan head-on before Tamayos’ drugs started having effects on Muzan and weakening him. That means, he was fighting Muzan when the demon-lord was at full power.

This feat alone speaks volumes about his strength.

Muichiro Tokito was able to fight upper moon demon number 5, Gyokko, and was able to defeat him by evolving his Mist Technique.

He was also the first to understand the demon slayer markings and the red nichirin blade use. He was the one who held down Kokushibo which led to the ultimate defeat of the demon.

Other than him, fan-favorite Rengoku was also one of the strongest Hashira, however, he’s not on the list due to being dead before fighting Muzan.

Do you agree with our list? If yes, then awesome.

But what if we told you that even though they are strong the people mentioned in the list aren’t the strongest Demon Slayer in the series.

Read here to know about the strongest Demon Slayer who almost defeated Muzan singlehandedly. Let us know who you think are the strongest hashira in the comments. 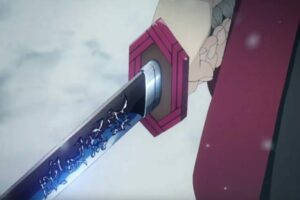