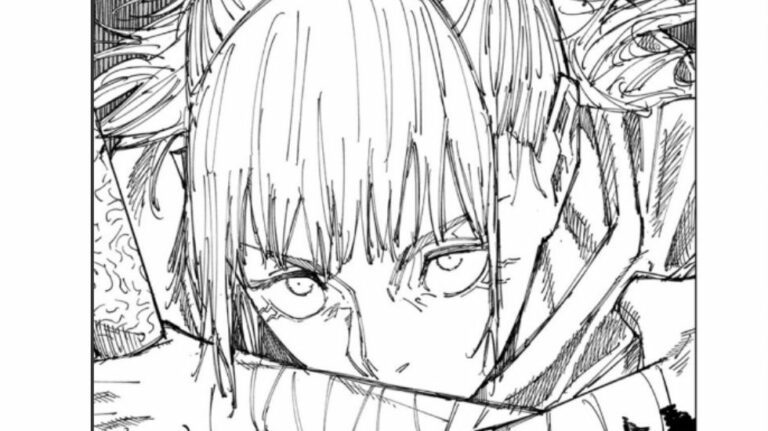 We are nearing the major Culling Game arc, and JJK chapter 158 made it very evident. After two (and a half?) mini-arcs, the story is picking its pace back up, throwing us plenty of developments at one go.

The last chapter had ended on a sweet note of Hakari agreeing to talk with Itadori & Co.

After a long wait, we could finally see the legendary Hakari side with our favorites. But he hasn’t revealed his technique yet, so frustrating!

Other than that too, JJK chapter 158 gave us a whole lot of information. It was a terribly interesting and exciting chapter to read if I had to give a one-line opinion.

I took my sweet time reading it and moments like these are when I am incredibly happy to be able to read Jujutsu Kaisen.

With that said, let’s begin with the chapter events.

Hakari is Todo 2.0? …or should I say it the other way round taking seniority into consideration? The switch from a formidable opponent to a starry-eyed friend was pretty quick for Hakari, just like Todo.

But can we call Hakari a power digger?

His and Kirara’s expressions when they came to know Megumi is the Zen’in clan head were fantastic! And Megumi flexing his status as the head? OOF! Sign me up for more.

Too bad for us and Hakari that Maki annihilated the entire clan the next day, though, no more Clan Head Fushiguro. T_T

Well, at least this conversation finally addressed that Gojo is sealed and Yaga is dead. Panda’s somber mention of Yaga’s death was unsettling because it somehow became more real.

Also, it was kind of heartbreaking to see Hakari react to both events.

The sorrow everyone feels for Gojo and Yaga goes to say how much both of them helped “weird” people through the school.

As if all this was not painful enough, Itadori immediately connecting someone’s death to the Shibuya Incident (and by extension, to himself) was devastating as well.

The Shibuya Incident is a huge reminder to Itadori of his helplessness and weaknesses, so it is no surprise he is still reeling from it.

I also wonder how Panda is coping up with his loss.

After some bleak exchanges, Hakari agreed to help Itadori and the others to stop the Culling Game. However, he put this forth as a ‘deal’: his help will come at the cost of revision of jujutsu regulations.

Aren’t we a tsundere now, Hakari? Kirara saying that Hakari got the most passionate when helping Jujutsu High proves that Hakari is not all that selfish.

He genuinely wants to help in whatever way he can.

Before we even dived into the Culling Game arc, JJK chapter 158 already gave us some updates for it.

First, we come to know that Okkotsu is in the Miyagi colony. More importantly, there are players who have already begun competing and making major changes.

We finally saw the kogane, a shikigami that Tengen had told us would be the interface for the game. From this chapter, we came to know that the kogane is a pretty high-tech interface.

I mean, damn, it has a freaking screen with all data in the system. How does something like this even exist? xD

Additionally, we come to know that Itadori is already a Culling Game player because of the kogane. It seems that the shikigami only listens to orders from the players or people they give an okay signal for.

Technically speaking, it is Sukuna who’s the participant, not Itadori.

We already know that Kenjaku created Culling Game participants in two ways: either awakening their technique or making them take in cursed objects.

Since Itadori ate Sukuna’s finger, that too voluntarily AND Megumi was witness for it, Sukuna is a participant for the Game.

You can think of it as Hana Kurusu being the participant & not the person whose body she is inhabitating. Someone give poor Itadori a vacation, please.

Next, and the MOST interesting part of the chapter – the new characters! This arc is going to introduce us to a bunch of new characters with cool techniques, and I could not wait for it!

The story did introduce Fumihiko Takaba earlier, but we have gotten to the actual players now with the introduction of Kashimo Hajime and Higuruma Hiromi.

We first get a sneak peek at Kashimo Hajime, who seems another one of the ancient sorcerers like Sukuna taking part in the Game.

This participant screams bad news (in most cases people who look for strength = bad news) from the moment they appeared on the screen.

That attack to kill that player looked pretty sick. But the worst part, of course, is that they are looking for Sukuna to have a showdown.

Adding to that is Higuruma Hiromi – the lawyer we saw a glimpse of a few chapters after the Shibuya Incident.

What really hits hard is that both of them have over a hundred points, which means they have killed a huge number of people already.

Both of them seem to possess some weapons, Higuruma’s seemingly a hammer of sorts. I bet he is one of those people whose techniques Kenjaku awakened.

While he hasn’t used any of his points, Kashimo just added a new and very interesting Culling Game rule. Using the rule of full disclosure, a literal manhunt would begin.

The players would know who is where and with how many points.

On the contrary, it also makes it easier for the players to prepare for incoming dangers of murderous players.

Let’s talk more about Megumi. Over the past couple of chapters, we saw how cool Megumi is. He is quickly exploring more of his technique and also using wits to win battles.

He figured out Kirara’s technique pretty smartly too. So, in this chapter, he also tells us about his plan of Culling Game. He had told Itadori that he had one where they could choose to not kill people.

According to him, there must be players in the Game from ancient shamans who don’t want to take part in it. But they are bound to it because of their contract with Kenjaku in the past.

And they might also have a lot of points, being as strong as they are. So, they could pressure these people into making a new rule that would allow Tsumiki to leave the Game.

However, to do so, they have to make sure that none of them die, including Tsumiki.

They need to counter rule 8 that says anyone with the same points for 19 days will have their cursed technique removed aka death.

But since they cannot remove it directly, they want to add a rule that allows players to transfer points to each other.

That would ensure none of them die out of lack of points.

Moreover, Megumi also thought up a rule that allows players to leave the Game at the cost of a substitute non-player. Thus, the overall plan of action for this company is:

With that, we end this chapter at a very exciting note. A lot happened in JJK chapter 158 and I thoroughly enjoyed the chapter.

What about you? Let us know in the comment section what your predictions are for the next chapter!