Jujutsu Kaisen chapter 150 is all about Maki. If a beautiful cover spread wasn't enough, then her rage mode should have taken you by storm! 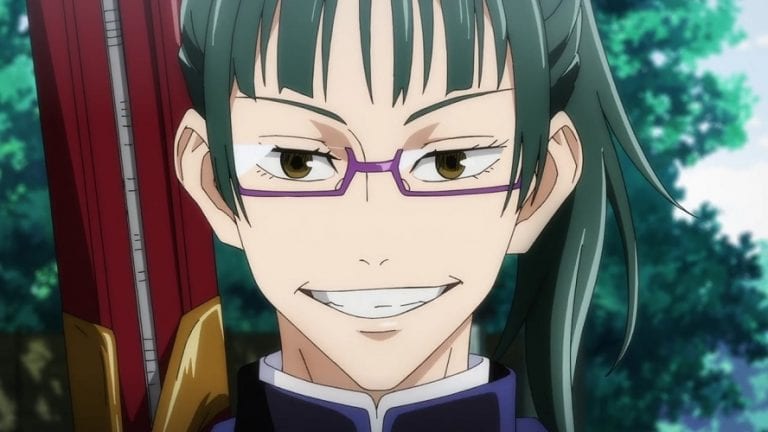 WOHOOO! This weekend brings us JJK chapter 150; a landmark chapter for the series! For a story that would have met its unfortunate end in chapter 9, it has come a long way. A truly long way indeed, and we are very thankful for it. Jujutsu Kaisen has made its special place in the hearts of many people with its characters and storytelling. Along the way, we came across plenty of stunner moments, and for this landmark chapter, Akutami went all out.

If a beautiful cover spread wasn’t enough, our favorite Maki-senpai took the chapter by storm in JJK chapter 150. Seriously, if you don’t stan her yet, you really gotta raise your standards, I’d say. 😉 That IS an opinion, but if you’re still here, you probably agree with that. So, let’s dive into some thoughts on the latest chapter 150! Be ready for lots of Maki-san fangirling, though. :p.

Also, if you haven’t read the chapter yet, you can do so officially on Viz or MangaPlus.

Contents hide
“A curse entrusted to Maki”
Maki’s retribution to the Zen’ins
Is this Naoya’s goodbye?
Let’s talk about the plot and the art, shall we?

“A curse entrusted to Maki”

Relationships. These intangible bonds we hold with people, whether by fate or choice, drive us and our actions. This condition holds true for all of us, but the manner with which they drive us differs on a great basis. For some of us, these bonds are precious treasures and for others, a cut that always bleeds.

The unjust and misogynistic treatment in the Zen’in clan began a tale of tragedy for the twins. And this story would turn into doom for the family itself. Maki and Mai suffered very long with their wounds that always came through the Zen’in clan. Yet, despite their differences, Maki and Mai had undulated love for each other. They were united in another thing, though, their hatred towards the cause of their anguish.

After years of being treated as a curse themselves, the sisters probably very well knew what their true wishes were. And so, Mai made sure that Maki’s half-assed anger towards the Zen’ins turned absolute. This was the curse she entrusted to Maki; more than revenge, it was to cut the problem at its root. DESTROY.

The build-up to this rampage was GREAT. The emphasis on this curse Mai gave over to Maki makes us feel but a part of the despair both of them felt. If you think about it, their entire lives up to this point had gone into fixing shortcomings that weren’t even their fault. It is not like they chose to be women and chose to be born as twins. Yet, at such tender ages, they took up irrational things to fix – all because the Zen’ins might have it all but not good heads on their bodies, and well, the top seat.

There is a common theme in Jujutsu Kaisen’s story. There are some events that are unavoidable, and it is only a play of WHEN the lid of these events comes off. With Maki’s rampage, it was clear that the Zen’ins downfall was in line too. Sooner or later, they had to atone for fostering bloodthirsty, power-hungry scums.

Maki’s retribution to the Zen’ins

I actually had goosebumps when Maki kicked this grand butt-kicking off in JJK chapter 150! She was already fierce, but with her scars from Shibuya and Mai’s death, she looked like a calamity personified for the Zen’in clan. However, seeing Maki’s regrets about Mai before beginning a long brawl was too painful. Maki’s silent apology for her dreams that were too big really landed home when you think of how she wanted to make a safe space for Mai. Nandeeeeee?

*wipes tears* What do I talk of the fights? Beginning with the one-eyed drawing of Maki in rage was truly a sight for sore eyes.

And talking about sights, as the chapter progressed and Maki killed the clan people, it was incredibly satisfying to see the pure panic spreading through the men. But, seriously, don’t any of the Zen’ins have any hobby other than “being the one to kill person X”? First, Ougi and now Nobuaki from the Kukuru squad both wanted to kill Maki themselves. Like, please get a life!

It was so good to see Maki somersaulting about and overwhelming so many people at once. She has upgraded into a girl boss in her full glory, and I am all here for it. And well, the clan once again proved that they are nothing but a bunch of prideful people who talk a big game. Let alone the entire Kukuru squad; even the Hei squad had to join in the fight. And they did enter with a bang of Chojuro’s technique. But their surprise at Maki’s speed and raw power left them stunned (as it should, what a kween).

I did feel a little, and mind you, only a little bad for Ranta. He seems young, and he put a lot of effort into holding Maki back. But the terrible brawl with roofs falling and pushing limits came to an end pretty quickly. What a poor bo; he thought it was Jinichi who was the victor standing at the end, but it was just his head. Maki didn’t kill him, so I really hope he turns over into a new leaf somehow.

Like the final boss, we see Naoya standing at the end of this ferocious fight. He is the final boss in true sense, because both his co-conspirators bit the dust already. Well, one got his head dunked into water which was pretty funny, not gonna lie. We also come to know that Naoya is the head of the Hei, the strongest squad in Zen’in clan. In simpler terms, it means that he is the strongest shaman left.

The near-clan-head was brave enough to ask if Maki has a heart or not. As if. Every time Naoya appears in the panels, I get an urge to Jungle Savate him (Noragami fans, where ya at?). Anyway. Props to Naoya for asking a rhetoric question, though.

At least this would have gotten through his thick skull that whatever heart she did have left, Ougi took it away by his actions. Maybe if he hadn’t driven the sisters into a corner, she’d not have gone on such a destructive rampage. But, she still didn’t kill Ranta out of consideration. The other things aside, this little action by Maki reminded me of Toji too.

The biggest question (which makes sense, unlike Naoya’s) is if this is the final fight between Naoya and Maki. Unless Naoya has some miraculous trick up his sleeve, it is hard to see how he will defeat Maki or live through this. I hate to say it, but I would be minutely disappointed if a villain full of potential like Naoya is killed so soon. At the very least, he makes the plot interesting from the Zen’ins side. I have more to say about this so:

Let’s talk about the plot and the art, shall we?

Is it just me, or is the story moving too fast? Jujutsu Kaisen has always been fast-paced, but these last few chapters are even more so. The buildup to Maki’s rampage was good, but it was short-lived. As a result, it perhaps didn’t land as beautifully as it would have if there had been more build-up.

And in this rampage, Maki took down nearly the entirety of the Zen’in clan! I was actually hoping to see more politics from the family – especially after Naoya informed us of the factions after Megumi became the clan head.

If it really is the end here, I don’t really see a point in all that information. While it did come at a huge cost of Mai, it was far too easy to eradicate a vital plot point of the Zen’in family power struggle. It is almost like Akutami is reluctant to handle multiple storylines at the same time. We can’t say if it was good or bad, because the culling game might just be too expansive to incorporate it. A small part of me still hopes for more complexity in the plot though.

The elephant in the room, is it not, the art from JJK chapter 150? There were certain pages that came across as rough drafts rather than finished panels. It certainly threw me off to see the sudden switch midway.

Until now, the story and art have been awesome, with little to no complaints (the flow might be a different area altogether). But, this chapter did concern me and I’m sure you, as well.

The rough paneling and art might just be Akutami’s way of showing the raw impact of the fight. He probably wanted to convey the immense speed of the battle and how Maki has leveled up her speed even more. Akutami has taken inspiration from many existing pieces of art in Jujutsu Kaisen. So, since the mangaka is also a fan of Hunter x Hunter, he might have used similar art style to depict that feel.

Or, we are just reading too much into it and Akutami is actually overworked. There is no room for doubt that weekly mangas are tiring to make and maintain. No matter how well the artist has planned their story, burnout is a hurdle they can’t overcome. I (and the fandom) hope Akutami is taking the proper rest he deserves to keep Jujutsu Kaisen stick to its standard. Otsukare, Akutami-sensei!

So, what are your thoughts on Jujutsu Kaisen chapter 150? Did you enjoy Maki’s rampage? Comment below!