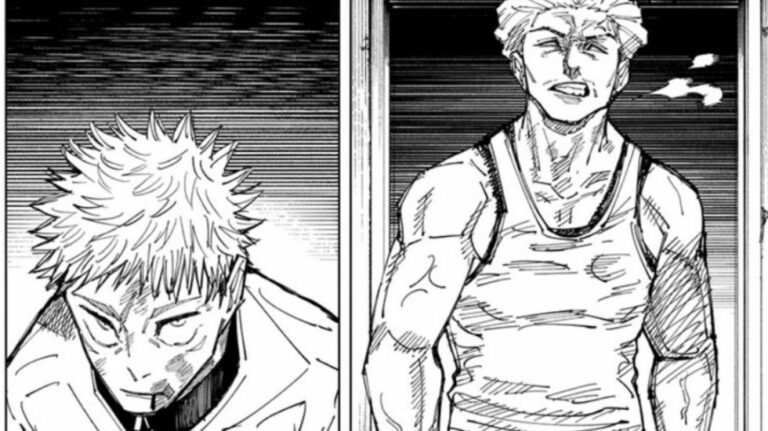 Jujutsu Kaisen’s introduction to a brand-new technique, Love Rendezvous, last week was amazing. With Megumi and Panda capturing Kirara, they also conquered one-half of the one hell of a fort. However, Itadori was up for in JJK chapter 157 for the more difficult half of the path. Let alone convincing, now Itadori had to fight to even put across his point to Hakari Kinji.

We were hoping to see Hakari’s techniques in the latest chapters, but unfortunately, that did not happen. However, chapter 156’s action and Megumi’s growth took us by surprise, indeed. That settled; what happened in JJK chapter 157? Let’s go over it!

Please get first-aid for Itadori

Last we saw Itadori and Hakari in chapter 155, they both had already decided to fight it out. Hakari cleverly dug out Itadori’s intentions, and the latter had no choice but to fight back. After all, Hakari and Kirara did not apparently get any skills for listening to people.

The headbutt last week was amazing. We were pretty sure we are going to get a cool (if not insane) fight. But cut to this week’s chapter, and Itadori was in an absolutely dismal state! It turns out, instead of fighting, Itadori had taken every single blow from Hakari without dodging.

In fact, JJK chapter 157 begins with Hakari throwing Itadori out of the room! He even told Megumi and Panda to stay out of it. Chotto matte, “it” – what? Did the Shibuya Incident not give Itadori enough kick for him to remain defenseless? What was he even doing?

Asking because, God, those punches looked hella painful. I physically moved back while reading. Ouch.

One thing that became clear from all that beating is the growth of Itadori’s strength. He already had superhuman physical abilities but that rebound! There is no doubt that Choso telling us how Itadori has become a demon of strength is true. We all wanted him to grow strong, not in this way, though!

According to Itadori, the best move was not to fight back or guard himself. He HAD to take those punches to get Hakari’s approval. And he also believed that it was his role to get Hakari’s help, no matter how. So what if he had to take a few punches? At least Itadori admitted that those punches were actually painful.

What is weird is how Itadori described them: they felt like a serrated bat. That somehow made reading the chapter worse, did it not? But, thankfully, Hakari himself touched upon this. Gojo (this man is literally EVERYWHERE) had told him that his cursed energy has an ‘edge’ unlike others’.

So, regardless of force, Hakari’s punches stung Itadori because of his cursed energy with an ‘edge’. This fact is interesting because until now, we never came across something like it. Does this mean there are different kinds of cursed energy in jujutsu? What exactly determines the manifestation of cursed energy? Hopefully, the story will address these questions later!

As we saw before, Hakari’s sole condition for his decisions is passion, be it in any form. Plus, he is right about a shaman asking for help from another shaman. This business is riskier than running a fight club; it runs on the lives of the players. To ask for help without a solid purpose or willpower is basically leading the other person to death.

But if you are asking for determination, there is nobody better than Itadori for it. Despite his realization against Mahito about his minuscule role in the world, his eyes were fixated on that purpose. If he had something to do, and only he could do it, he might as well do it with determination.

Here is also where things get a bit interesting. Itadori’s soliloquy about being a cog in jujutsu was oddly reminiscent. Allow me to remind you why. Back in chapter 9, we saw Megumi say the exact same thing. This chapter proved that Itadori and Megumi are more alike than we thought, and Itadori is maturing by the second.

Moving on, Itadori’s speed, even after getting beaten to such an extent, shocked Hakari for a second. Wait till you see him fighting back, senpai. Moreover, the disparity between a ‘cog’ and his eyes was pretty impressive to him.

It is time for a deal

…but it wasn’t enough to convince him just yet. He was still into the whole throwing Itadori like a rag doll thing. However, Kirara jumped in at the right time. Thank you, Kirara. Kirara’s technique and demeanor are pretty quickly making them quite a likable side character for me.

Kirara managed to put a nail in the coffin with a single line! It was a pretty clever move with perfect timing. Hakari was getting excited and passionate about his face-off with Itadori. And he had not even realized it yet. Kirara pointed it out to Hakari, and it struck him.

If he still disagreed with listening to Itadori, it would mean he was lying to his passion! That is a thing Hakari would never do. Kirara revealed another thing to us: Hakari was always the most passionate when he helped people at Tokyo Jujutsu High. That is kind of sweet, I must say.

Well, it looks like Megumi, Panda, and Itadori somehow managed to bag a deal. But the real power of this deal is still in question. We just CANNOT wait for Jujutsu Kaisen to reveal Hakari’s technique. It has to be something pretty fantastic for Gojo and Okkotsu to praise him.

That was all for JJK chapter 157! Did you like the chapter? Let us know in the comments.