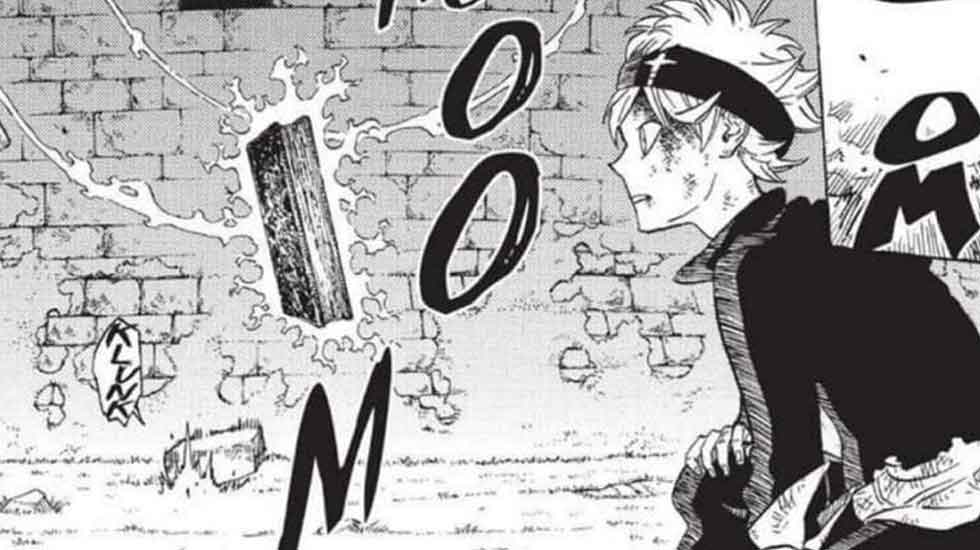 In a village called Hage out in the boonies of the Clover Kingdom, we met an oddity. This was Asta, a magicless boy with miraculous determination. Asta has come so far from an ordinary peasant child to a reliable fighter for the Magic Knights and the Clover Kingdom. And the secret behind this is perhaps him being the most ordinary boy in the Clover Kingdom, and a filthy-looking grimoire whose power could only be used by him.

Asta is the owner of a five-leaf grimoire that has helped him take steps towards realizing his dream of the Wizard King. But where did this grimoire come from?

Contents hide
How did Asta get his grimoire?
Does Asta have Licht’s grimoire?
Who owned the five-leaf grimoire before Asta?
How did the grimoire reach the tower in Hage village?
A random villager picked it up and took it to the tower
Drouot knew the whereabouts of the grimoire
What powers does Asta’s grimoire have?

How did Asta get his grimoire?

Asta got his five-leaf grimoire at the Hage Village’s Grimoire Tower after the Grimoire Acceptance Ceremony in a moment of despair and redemption. At the age of 15, all children of the Clover Kingdom receive their grimoires. And so, Asta and Yuno reached the Grimoire Tower in Hage for their Grimoire Acceptance Ceremony. Yuno, being a mage loved by mana, was graced with the four-leaf grimoire possession, which was also owned by the first Wizard King, Lemiel.

However, Asta does not receive any grimoire in the entire group of children. This is because he is a magicless boy, but he has a big dream to become the Wizard King.

For this reason, Asta gets ridiculed and starts feeling down-spirited. While he was deep in thought, Yuno is cornered by Revchi, an ex-Magic Knight. Revchi forcefully wanted to take Yuno’s grimoire and sell it on the black market. However, Asta sees this and jumps in to save Yuno. But Asta gets overpowered by the Chain Magic-user, who reiterates his lack of magic and tells him that he was born a loser. This makes Asta feel depressed and give up on his dream, but Yuno interrupts and announces that Asta is his rival.

Asta realizes that he had just given in to the despair for a moment there and rises again, breaking the chains binding him. A dirty-looking grimoire flies over to him from the Grimoire Tower’s wall, and its pages flutter open. A sword emerges from it, and Asta uses it to defeat Revchi. This “dirty” five-leaf grimoire has a devil inside it and a sword imbued with Anti-Magic. This would eventually turn into one of the Clover Kingdom’s greatest weapons and make Asta a legendary rookie.

Does Asta have Licht’s grimoire?

Due to an unfortunate eye of a devil called Zagred on Licht’s grimoire, Licht’s clan was wiped out by humans hundreds of years ago. He gave in to the despair, and his grimoire turned dark as well. The battle between the first Wizard King and the elven leader ended on a bittersweet note, but the grimoire stayed the same.

However, before Asta got his hands on the five leaf clover grimoire, it was in posession of some other person. Now, you wouldn’t believe this coincidence!!! Or is it a coincidence?

Who owned the five-leaf grimoire before Asta?

Before Asta, his mother Licita was in possession of the five-leaf grimoire for some time. This was when she sealed Liebe into the grimoire. Could this be the reason why he grimoire might have chosen Asta?

Liebe was a devil without magic who was bullied and then kicked out of the Underworld. He wandered the human realm aimlessly, but humans feared him even though he was a child with no ill-intent. They called Magic Knights, who chased him until he nearly dropped dead. He was waiting for death to end his unfortunate life, but that is when Licita found him.

She was not afraid of him and took him home. She confessed that she had an uncanny form of magic that sucked out mana and lifeforce out of anyone around her, so she was outcasted from the village too. Licita asked the devil to be her son so both of them won’t be lonely anymore and named him Liebe.

When Lucifer, the highest-ranking devil, found that Liebe lived in the human realm, he apparated into Liebe’s body, intending to take over. But Licita could not let her child go like she had with Asta and fought Lucifer. In the process, she got stabbed fatally, but she sealed Liebe into the grimoire in her last moments. She did it to protect him until he grew big and strong.

The grimoire Licita had sealed Liebe in was the five-leaf grimoire. She had found the dusty book someday before finding Liebe.

How did the grimoire reach the tower in Hage village?

The grimoire was left abandoned after Licita sealed Liebe into the grimoire. So how did it reach the Grimoire Tower in Hage village?

Licita lived on the outskirts of a village, presumably close to Hage village as she abandoned Asta there. We know that all of Hage and the nearby villages’ children have been attending the Grimoire Acceptance Ceremony at Hage’s Grimoire Tower since a long time ago.

Black Clover: Why Does Asta Have No Magic?

So, when a kind villager passed through the place where Licita lay dead after her battle with Lucifer, they picked up the grimoire next to her. And as a logical next step, thought of returning it to the Grimoire Tower.

Drouot knew the whereabouts of the grimoire

Another big and surprising line of thought could be that the Grimoire Tower’s keeper, Drouot knew about the five-leaf grimoire all this time. Now, this could be for various reasons. First, easily inferred from the above-mentioned possibility that a villager gave it to the Grimoire Tower, and since he is the keeper, he knows about it.

However, looking at his surprise when Asta got the grimoire suggests that he thought it was an unusable grimoire (or that there was definitely something more to a worn-out book?). Second, legends and myths passing down from generations about the first Wizard King and the Demon might have also contained hints about a grimoire like this originating.

Third is an interesting angle. There is no information available on Drouot but he was shown as a wise man and especially focused on in the first few chapters/episodes.

On the basis of this, there might definitely arise a possibility that he is not just an ordinary tower keeper, but might as well be connected to Licita. Their relationship might be anything from acquaintances to even father-daughter. If that is the case, he might have gone to visit Licita and found her dead. He might also have known about Liebe and thus, figured out something of what had gone on. Drouot then took the grimoire away with him and sealed it in the Grimoire Tower’s walls so that it does not fall into the wrong hands.

This might also explain his surprised expression when Asta received this strange grimoire.

What powers does Asta’s grimoire have?

Asta’s grimoire gives him the ability to use the power of Anti-Magic. He can use swords imbued with Anti Magic to reflect, cut, or nullify magic. He can also draw out the power and circulate it in his body to assume his Black Form. This unique power is attributed to the devil that resides in Asta’s five-leaf grimoire, Liebe.

Asta’s magicless body allows him to draw out this power and use it without being harmed. He later on also forms a contract with Liebe to use a Devil Union form with him.

What are your thoughts on Asta getting his five-leaf clover grimoire? could there be any particular reason as to why the grimoire chose Asta?