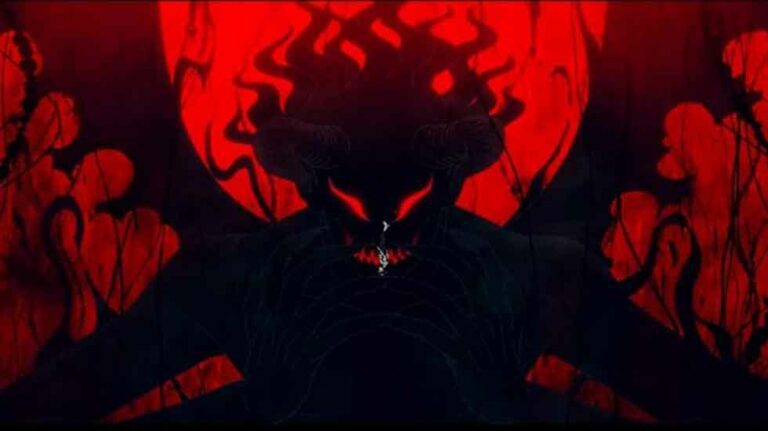 In a world where magic is everything, Asta has been an exception since birth. Well, in a lot of ways (side-eyes his screaming) like his determination and dream.

But the biggest difference that set him apart is not having a single drop of mana in him. Our MC is just a magic-less boy wanting to become the Wizard King, simple.

He always has been the laughing stock wherever he went, but everything changed with his unique grimoire.

It was as if all the things in the past happened so Asta could turn from a laughing stock into a big, if not the greatest, asset of the Clover Kingdom.

The grimoire did not give him magic; on the contrary, it gave him something only he could use: anti-magic. And this anti-magic was the courtesy of the devil residing in the book, whose identity finally came to light.

What is the name of Asta’s Devil/Demon?

The name of Asta’s Devil is Liebe. He resides in the five-leaf-grimoire that Asta has and is the source of his Anti-Magic.

Liebe’s identity was revealed for the first time in Black Clover chapter 267.

And instead of a scary-looking menace, Asta’s devil was a kid! If it weren’t for the horns and black wings and the tail you could almost say that Asta brought a friend with him. I mean…well…you get it. xD

Asta’s devil is revealed to be Liebe after Nacht made Asta draw him out to fight it.

Being devastated after feeling powerless against the Dark Triad, Asta turned to Nacht to become stronger. Like Asta, Nacht too relied on the powers of a devil.

What are the powers of Asta’s Devil/Demon?

We believe that the complete extent of Liebe’s powers has not been revealed yet. Like Asta, he too is bound to grow stronger as the series progresses.

But, for now, Liebe is known to possess Anti-Magic and he has entered into a contract with Asta, thus unlocking a Devil Union form with him!

Liebe has the power of Anti-Magic that is imbued in the swords of the five-leaf grimoire owned by Asta.

He has three swords with different properties of Anti-Magic and uses them to reflect, nullify, or cut magic.

Asta can also use this Anti-Magic to get into Black Mode by circulating the energy through his body.

This new form of Asta and his devil is not revealed yet (read ahead to find out about Asta’s Devil Binding ritual).

However, judging from the Dark Triad’s and Nacht’s forms, this might be the most powerful form. It is a thing to see if this form will allow Asta to create a Mana Zone that nullifies any magic that comes in its vicinity.

There might be more powers that get revealed later on as we progress!

How powerful is Asta’s Demon?

Since it has been repeatedly emphasized in the Black Clover universe that the top-ranking devils are the most powerful, we can say that Liebe is not that very powerful.

He was born magicless at a low rank. BUT! What sets Liebe apart from the hierarchy of the devils is his Anti-Magic power.

Anti-Magic is a never-seen-before power that managed to hurt (and almost defeat) Dante, the devil host for the most powerful devil Lucifero.

With that in mind, Liebe does stand a chance against the powerful devils, especially now that Asta and Liebe went through the Devil Binding Ritual.

The true extent of Liebe’s powers are not in the light yet, but it will be interesting when Asta and Liebe clash against the devils again.

Liebe tells Asta that all devils are scumbags and that he wants to take over Asta’s body to take out his malice and anger of all these years.

But Asta does not sense any murderous intent in the former’s ki and remarks that he isn’t a bad guy. He was also thankful to Liebe for lending his powers to him.

Liebe finds this very odd but still refuses to concede and wishes to defeat Asta instead. Thus ensues a battle between Liebe and Asta.

Contrary to Liebe’s expectations, Asta manages to complete the Devil-Binding Ritual by defeating the other despite only having one arm.

Instead of asking him to be Asta’s servant, he asked him to be friends again.

Liebe agreed to the “contract” and lent his power to Asta.

Asta and Liebe worked towards achieving a Devil Union form, and they even defeated Nacht in that form. However, this form has not been revealed yet.

Liebe’s Origins: Why does Asta’s devil look like him?

Asta’s devil looks like him because they are both foster brothers.

Liebe was taken care of by Asta’s mother. While this is not a satisfactory reason for them to look alike, it might be Tabata sensei’s way of telling that they are related and in fact very similar to each other.

Liebe was born in the underworld like all other devils, but he didn’t have any magic, unlike them.

He was always ridiculed and beat up by the devils on top. Ever since he was born, he was subject to torment nearly every day.

One such day, a devil at the top threw Liebe at a gate of the underworld, but since he didn’t have any magic, he passed right through.

Coming to the human realm didn’t change his situation a lot. The humans were scared of devils and shunned him away, even though he was just a child who roamed around without harming anyone else.

This went on until he was waiting for his death. But, a woman came across him and took him home. The woman also gave him the name Liebe.

This was Licita, who was shunned and loathed too.

She had a body that “stole” magic and life from whatever was around her. She wasn’t afraid of Liebe and was glad to have him around instead because she couldn’t suck out his magic.

Well, because he had none.

The woman brought up Liebe as her child, and they both helped each other find happiness in life after being in pain for so long.

However, it was as if fate had cursed them. The highest devil, Lucifero, found his way to Liebe’s body. He wanted to take over and create chaos in the world. Licita attacked Lucifero, trying to absorb his magic.

She did not let go so that Lucifero could not fully take over Liebe’s body.

But in the process, Lucifero fatally stabbed Licita. Before dying, she sealed him into the grimoire she had chanced upon to keep him safe and alive until he grows strong.

We had only seen the Asta’s devil a handful of times before Tabata-sensei revealed his identity. And if you need a recap of the encounters, don’t worry! I got you with the notable ones.

In the battle against the Diamond Kingdom’s Eight Shining Generals, the Witch Queen forcibly awakened Asta’s consciousness to his devil, Liebe.

Liebe wanted to take over Asta, but he fought and returned to his body, drawing out the Devil Form.

After Asta and Yuno defeated Zagred in the Reincarnation Arc, we briefly see Liebe exchange some harsh words with him. The latter calls Zagred “senpai“ and mocks him for losing against a junior.

In the Dark Triad arc, we see Asta fighting tooth and nail to beat Dante, who has Lucifero’s powers. He barters his right hand for more power with the Devil first.

But when the Dark Triad captures Yami, he offers more of his body to be taken away by the Devil. However, Liebe refuses because Asta “is not strong enough.”

I know! The curiosity of the identity of this Devil was increasing with every appearance it made! So without delaying it anymore:

So, in short. Asta’s Devil is named Liebe, an anti-magic devil. He was sealed inside a black five-leaf grimoire by his foster mother.

This grimoire later made its way to Asta. Liebe’s foster mother, Licita, was also Asta’s mother and was killed by Lucifero.

Before ending this, here is a CUTE tiny Liebe eating food for you:

Do you like the devil’s backstory? And are you excited to see Asta and Liebe kick the ass of the Spade Kingdom forces? Let me know in the comments!!