Why Did Yelena Meet Eren Secretly in Attack on Titan?

Yelena's conversation with Eren left a lasting impact on him. Dot Pixis did manage to uncover that Yelena was partly responsible for making Eren go rogue. But what exactly did she tell Eren? How did it affect him? 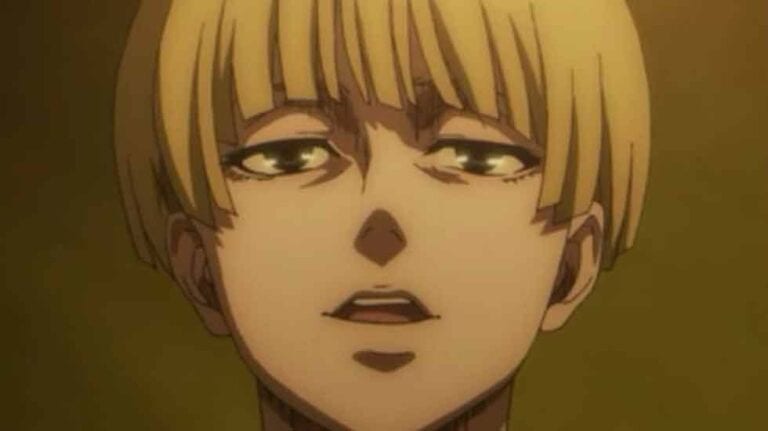 WARNING: This article contains major manga spoilers for Attack on Titan. Read ahead at your own discretion!

Ever since agreeing to be on board with the Survey Corps, Yelena has been one of the most intriguing new characters introduced in the story. However, she brings more trouble to the table than its worth! Paradis is now at civil war due to the strife between the yeagerists and the military, and Yelena is a big reason why.

Who is Yelena, and who are the volunteers?

Yelena is the leader of the Anti- Marleyan volunteers, the revolting section of the Marleyan army. Marley, after annexing small nations, used their people in its military. These soldiers found solace in Zeke, who took them under his wing. They infiltrated the Marley survey fleets so that they could act as the medium of communication between Zeke and Paradis; something essential to make sure Marley can be defeated.

Other than that, the volunteers are also responsible for introducing various weaponry and modern technologies to the island that aided in its development. They also played a key role in arranging the meeting between Lady Kiyoomi and the military for a possible alliance.

The trust between the group and the military quickly broke after the attack on Liberio. This is because many thought the volunteers played a key part in influencing Eren on Zeke’s stead. Dot Pixis played an important role in uncovering Yelena’s role in Eren going rogue.

When Pixis questions Yelena’s role in making Eren go rogue, we are introduced to discrepancies that go back at least 10 months prior to the attack. This was when there were celebration is Trost District as its rail systems opened. Turns out, her guard changed to Floch on the celebration day which allowed her to meet Eren without anyone being notified.

Presented with evidence that went against her, she admits that she met Eren in secret. Albeit her actions, she stresses that she had Paradis’ interest in mind. According to Yelena, she did so because she wanted Eren to take action which would subsequently trigger the military into taking action as well. Just like Eren, she too believed that Paradis was running out of time to counter the threat from Marley.

Being the ever so observant person he is, Pixis quickly calls her out on her lie. Though she doesn’t reveal what they talked about, Pixis assumes that it has something do with Zeke’s plan.

Sometime later, another scandalous action is brought to notice. Yelena managed to orchestrate the distribution of wine laced with Zeke’s spinal fluid into the top guns of the military’s glasses. This meant that at any given point, if Zeke were to scream in their range, they could transform into titans. This further showed that whatever Yelena had in mind, was something so radical that it required the destruction of Paradis’ military. It is also important to note that Yelena had started to distance herself from fellow volunteers.

Yelena had met Eren to tell him about Zeke’s euthanasia plan. She advocated Zeke’s ideology of letting the Eldian race died out and “convinced” Eren into being on board with it. In her eyes, the only way Eldians could be saved from their oppression is by peacefully dying out rather than partaking in more bloodshed. Moreover, she tells Eren that Zeke has full belief in Eren, and he would want to meet him in person to discuss this idea in greater detail.

Additionally, she informs Eren about the mixing of the spinal fluid in the wine. The reason the wine was tampered with was to eliminate any opposition that may come to this “reform”. Therefore, Yelena played a big role in not only making the brothers meet, but causing the downfall of the military

The influence of Yelena’s words on Eren

Yelena’s conversation with Eren left a lasting impact on him. Eren understood the importance of meeting his brother in person. He used the Corps’ visit to Marley as a perfect excuse to slip away to meet Zeke, which he does by pretending to be an injured soldier in the Liberio hospital. This is a significant point in the story as Zeke personally tells Eren about his ideology and plan.

It doesn’t take a genius to figure out that Eren would never agree to a plan that would cost the life of his people. This meant that Yelena’s words probably just solidified the memories he saw when he had kissed Historia’s hand; he understood finally why he did what he had to. That meeting with Yelena is when we say goodbye to the old Eren, who was still clinging onto some hope of diplomacy. After this, he knew that the fate of Paradis rests in his own hands, and no one else’s.

This is also where Eren starts to pay attention to Floch. He is the first person Eren confides the plan of rumbling too, which is a pretty big thing. Telling him that he will bring “ruin to this world”, he tells him to only pretend to follow the plan. Eren, therefore, realises that he has the ability to use Zeke as his own pawn by pretending to be by his side but get to Ymir to actually activate the rumbling.

Yelena met Eren to tell him about Zeke’s plan of euthanasia and convince him to go to Marley and meet him in person. When her guard switched to future Yeagerist Floch, she used it as an opportunity to slip away and meet Eren. She also planned with Zeke to make the military drink wine laced with his spinal fluid and told of this plan to Eren as well. In turn, Eren did agree to meet Zeke.

However, the meeting with Yelena only triggered his fight response more than ever, and this is where we see him turn into a strong willed man who would do anything to ensure the survival of his island. In short, this meeting is what led to the beginning of the complex dynamic between the Jeager brothers.

It’s safe to say that this is one of the most important events in the course of history. What do you think of Yelena? Was she correct to insert herself in the complex politics of Paradis and cause its organisational downfall? Or, was it inevitable because of the military’s mismanagement?