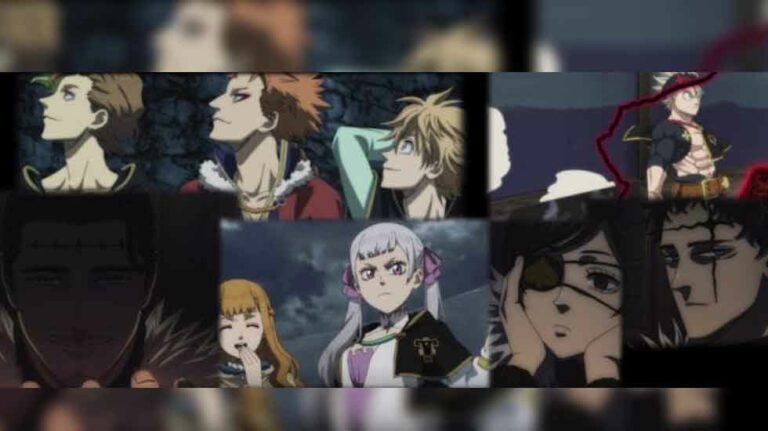 It is finally 2021! Happy new year to everyone and a happier one to all Black Clover fans out there. The anime came back from its winter break to broadcast Episode 158, and oh boy, did it take “new year, new me” seriously.

The trends were 100% understandable because the new episode really came in as a pleasant surprise and step-up from (I dare say) all the previous episodes. The art style has changed for good to suit the manga and it has only raised our expectations for a perfect execution for the action-filled arc. Let’s talk some more about the episode!

What went down: Time-skip Asta & Co. on a rampage

SOOOOO. Let’s talk about the plot!

The episode starts right where it left off, in the Heart Kingdom. We have skipped to the ending of the six months’ training of the Magic Knights and the danger is looming right over their heads. But now the difference is that they are not scared! All of them have worked hard, and so they begin their counterattack on the Spade Kingdom.

Loropechika and Undine are spying on the Spade Kingdom and see soldiers of the Dark Triad. These soldiers were advancing to the Heart Kingdom inside a moving castle through the strong magic region. Realizing that they have to be stopped, Loropechika starts forming a plan. However, Asta runs (or literally flies!) off to the site as soon as he hears that these soldiers are draining out weak citizens’ mana to move the castle. The soldiers also abuse and kill the citizens as they please because they cannot fight back.

YEP! Asta has come so far, from not flying on a broom in his exam to flying on his Demon-Slayer sword! He lands with a crash, though, and we finally see our boy after time-skip. He is a buff chibi now, and he sure seems he has grown quite a lot. Like they usually do, his opponents mock his lack of magic, but they didn’t know what was going to follow. 😛

Asta went on a rampage in his anger over the mistreatment of the citizens. He displayed the powers of both his swords – releasing his newly learned Anti-Magic slashes and reflecting the magic spells of his opponents. However, the BOSS was still left. The Dark Disciple, who was the heichou of the castle, had poison magic. This poison rendered Asta immovable and powerless. But using his third sword, he reversed the magic and its effect and made an OP move to end the boss.

We see Noelle carrying Finral and Mimosa in her transportation bubble through the strong magic region (look at how she has grown from her early days in Black Bulls!). Mimosa heals all the citizens’ stamina, and Finral gets ready to transport them back to their city. But there is a problem! The city was overtaken by the Spade Kingdom and made into a base. The people can’t go back, can they?

Worry not! Lolopechika found this the perfect opportunity to capture the base and sent Leopold and Luck to do so. Well. That battle didn’t last long. All the second stage mages of the Spade Kingdom had no chance against their attack anyway, ha! The people are concerned, and they ask Asta what he and his friends plan to do with them. They are so used to being oppressed by the strong that they feel they have to obey the powerful to stay alive. Asta reassures them in the most Asta way ever and says, “it is your city, isn’t it!”

A satisfied Lolopechika talks to Gadjah about the mission’s success but worry soon creases her happiness. The real battle with the devil is about to begin.

The Dark Triad is here!

CHILLS. We finally get to see the Dark Triad properly, and their very presence on the screen is chilling. They seem cold-blooded beings within a few minutes of interaction. Dante is the leader of the Dark Triad and was shown in Episode 156 as well. He, Zenon, and Vanica have the power of devils on their side and a force of ‘Dark Disciples’ as well.

As scary and creepy as they look, it will be interesting to know how they will plan their attacks from here on. They are also aiming for two arcane stage mages (uhm…WHO?!) and planning something sinister. All is under wraps for now and has only given rise to everyone’s curiosity after the mysterious exchange between the members of the Dark Triad.

We also see Ralph, a member of the Spade Kingdom’s Resistance, make his way to the Clover Kingdom. And not surprisingly but still very much so, reach Hage Village to meet Yuno. He collapses just as Sister Lily finds him. What are his motives? Why does he want to see Yuno?

At this point there are too many questions and not enough brain to comprehend any answers!

The anime has always been on a streak of amazing openings and endings, and OP13 and ED13 were no exceptions. Black Clover once again served great animation and music in both the new sequences.

After an upbeat and hopeful OP12,「Grandeur」by SnowMan takes us back to OP1 with its beautiful visuals. The OP also trended at #1 on Crunchyroll and YouTube as soon as it was released. The new ED13 「Beautiful」by TREASURE also trended on Twitter as fans loved the song.

Pulse of the fandom

Black Clover fandom really said “what a good day to be a fan” across all social media platforms as they celebrated the airing of the new episode.

The animation was well received by the fans, just like the new OP and ED. Fans are pumped up for the following episodes and are hoping that the studio keeps consistency this time around [cries in filler quality].

As a Black Clover fan, I seriously could not have asked for any better start than this for such a crazy arc. Episode 158 delivered what all the fillers and manga canon had been building up to quite beautifully. Studio Pierrot seems to have invested well in this episode, and hopefully, this arc too. The animation has been great in most action scenes, but consistency will be a huge determining factor with the kind of arc we’re going into. Praying to kamisama for that, given the studio’s record in the past.

The story is also sticking perfectly well to the manga and makes the scenes so much better to witness! In all honesty, Black Clover Episode 158 made me tear up a bit, knowing how much all my adored characters have grown up! The episode has all the appreciation from me.