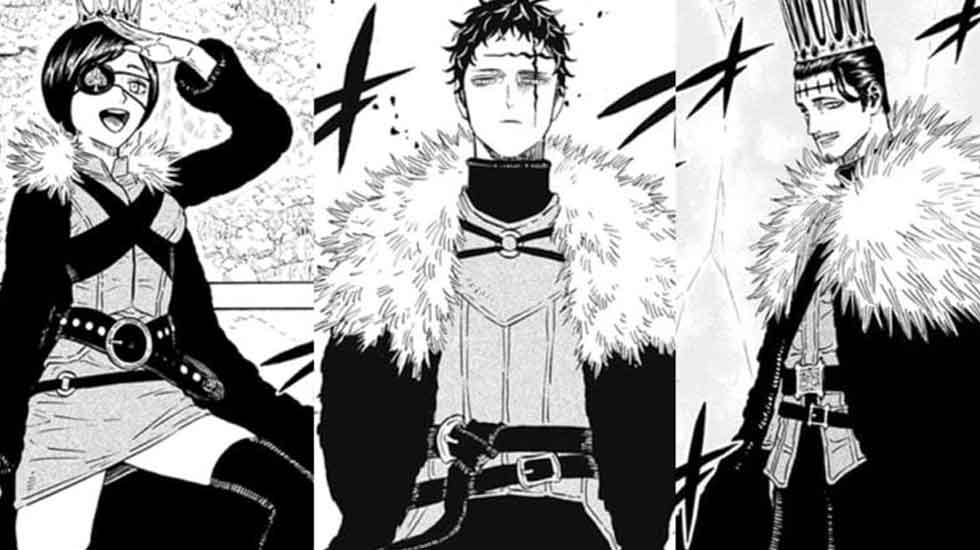 Just as the Clover Kingdom had gotten through the destruction after the Eye of the Midnight Sun’s attack, another danger apparated. And this time, the danger isn’t restricted to the Clover Kingdom; it could swallow the entirety of Clover, Diamond, and Heart Kingdoms.

At the center of this fiasco lie merely three people of the Spade Kingdom: the Dark Triad. However, calling them “mere people” might be a way to justify only their outward appearance. In truth, they are much more than that and are capable of defying every human emotion. Who are they? What are their goals? How powerful are they? Let’s dive right into answering these questions.

Who are the members of the Dark Triad?

The Dark Triad is a name given to the three Zogratis siblings of the Spade Kingdom. They are currently ruling over the Spade Kingdom. All of them are extremely powerful mages with the powers of the devils. They can borrow the powers of the respective top-ranking devils residing in them. Each of the Dark Triad has Dark Disciples – loyal mages with whom they can share the devils’ powers. Here’s about who is who along with their abilities.

Dante is the oldest of the Zogratis siblings and the leader of the Dark Triad. He thinks that “evil” is the only true face of humanity and enjoys it deeply when others are pushed to malice. Cold and cruel-hearted are words not enough to describe him. He enjoys battling and is zeroed on what he wants to do.

His hatred towards people who lack immense magical prowess is very evident. He has the power of the devil residing in him, Lucifer. This gives him the dual abilities of both Body Magic and Gravity Magic. He was not seen to start with 80% power of the devil but does that when he is excited. He can also regenerate his body even if it is cut by a sword, making it a formidable power.

Beneath the facade of a calm and calculated face lies a bloodthirsty being in Zenon. He is malicious and entirely devoted to his homeland. To avoid obstructions in his way, he can go to any means mercilessly, even kill hundreds of people without batting an eye. He looks down upon people who lose and prefers killing people who try to resist in the face of power. He feels contempt towards Yuno and Asta.

Being sent to defeat the Eight Shining Generals of the Diamond Kingdom, he did it all independently. His innate magic is Bone Magic, which grants him the ability to manipulate bones for attack and/or defense as needed. The devil’s power allows him to use very powerful Spatial Magic.

The last member of the Dark Triad is Vanica, host for the infamous devil Megicula. She is someone who enjoys fighting strong opponents and wants to weed out all weak humans from the world. She dives head first into any battle and calls people “trash” if they can’t fight her. Her devil grants her the ability of Curse-Warding, hence she can curse anyone. So far Megicula/Vanica has cursed Acier Silva, Lolopechika of the Heeart Kingdom, and the Water Spirit Undine. Her own magic is Blood Magic and she can manipulate blood as desired.

But what do we know about them from the past? Here:

The Dark Triad’s past:

The Spade Kingdom was once ruled by its rightful king of the House Grinberryall. The Zogratis siblings committed treason relying on the powers of their devils and annihilated the royals. They then took over the kingdom and established a dictatorial rule. They started being referred to as the Dark Triad, presumably sometime after these events by the citizens, whom they gave endless suffering.

The disciples of the Dark Triad are left unchecked, and they abuse their powers. The militant kingdom has exponentially expanded its borders with the devils’ powers bestowed upon the commanders. So what are the Dark Triad’s plans? Why are they going to such lengths?

The goal of the Dark Triad

The Dark Triad’s goal is bringing the Advent of Tree of Qliphoth to reality, so that devils may enter the living world. They despise the weak and expect these devils to wipe them out. But individual members have their own reasons for letting the devils into this world. Dante wants to fill the world with malice by unleashing the devils into the world of humans. Whereas, Vanica wants to get all fired with the tough guys who manage to survive a terrible situation like the invasion of devils.

The ritual requires World Tree Magic and Dark Magic, for which the Dark Triad captured William and Yami.

Why is this bad news, you ask? As the Tree of Qliphoth grows, it will reach different levels. Every level is called a “gate,” and there are seven such gates. With every gate, the Tree will unleash devils into the human world. There are ten devils in total: the deeper the level, the more powerful is the devil. Yeah, and in seven days at the final gate, we’re going to meet the BOSS, Lucifer. By the time the ritual is fully completed, Yami and William will die too.

This tree has been opened before, as seen by Lolopechika in the memories of the previous queens. It brought immense destruction and chaos. This time, too, with devils roaming free in the human world, it will be no less of havoc. 90% of humans will be massacred, and the entire continent destroyed.

How strong is the Dark Triad?

Since the Dark Triad has three of the strongest devils residing in them, we can say that they ARE pretty powerful. They have also mastered their respective powers, making them formidable opponents. Even Zagred, who wasn’t an extremely high-ranked devil, was so powerful that Asta, Yuno, Lumiere, Licht, Yami, and Secre were all required to defeat it. Making an estimation with that in mind, this Triad might be as strong as the Wizard King Julius in his prime.

According to the Heart Kingdom’s assessment, only people with Stage 0 or Arcane Stage magic actually have a chance against the Dark Triad. Not to forget that even post-time-skip Yami could not defeat Dante on his own, and William (and the Golden Dawn) could not defeat Zenon.

Under the Zogratis siblings, the Spade Kingdom has captured most of the Diamond Kingdom’s bases. The Dark Disciples also oppress the Spade Kingdom’s vulnerable population to suck their magic and power their fortress. The Dark Triad has already attacked the Heart and Clover Kingdoms and taken Yami and William captive. While the Heart Kingdom is in shambles after the abduction of Lolopechika and the curse on Undine by Megicula, the Clover Kingdom knights have begun their counterattack slash rescue.

Do you think the Dark Triad will be successful? Or do you think the other kingdoms will stop them? Don’t forget to read the latest chapters of the Black Clover manga on Viz and comment below!