Black Clover Episode 156 Review: The Hype of the Dark Triad Arc Is Building Up! 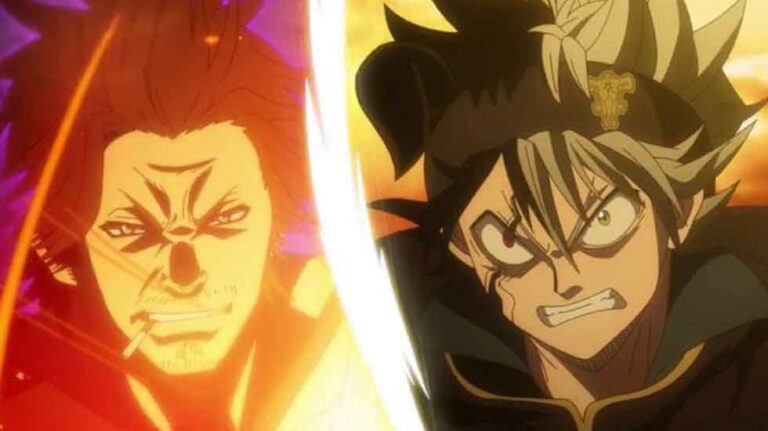 Alright. Can I say this was one of the best recent episodes of the Black Clover anime? Because I loved every second of it! Three of my favorite characters made their appearance here, and oh boy, how! Well, with Asta, it was like it always is. 😛 But, the foreshadowing! Yes. We love to see it. Let’s see what this action-packed episode had to offer to us.

[screams into the void]

Now that the feelings are out of the way (not 100%, and you know it too), ever since the power-scaling of Magic Squad Captains & Mereoleona, I was hoping for a match between Mereo and Yami. Scratch that, most of the fandom was.

Yami and Mereoleona are easily the most powerful people after Julius in his prime in the Clover Kingdom. So, their clash was expected to be mind-blowing, even if it lasted for a little while. We weren’t wrong as we finally saw these two beasts fighting each other. And uh, all for training!

Yami wanted to learn the technique of Mana Zone that he had tapped on in the havoc of the fight against Zagred, and the best person to learn it from was Mereoleona. She has displayed on multiple occasions that her Mana Zone prowess is a force to be reckoned with. While she was chilling (what contradiction) in the strong mana region, Ultime-Volcano Mountain Trail, Yami approaches Mereoleona and gets dragged into a to-death fight.

Her constant powerful and speedy attacks forced Yami into a corner and release his Mana Zone, although at a level lower than that of Mereoleona. Yami surpassed his limits, and our boy Asta was mirroring exactly that.

Asta getting the hang of his powers

After sparring with Gadjah for days now, Asta still hadn’t managed to land a hit. This information was nothing we had not expected, because Asta’s power until now has been in its raw form and always acted as a surprise element in fights. However, Gadjah knew exactly how his powers worked and his high sense of judgement kept throwing Asta off.

While he reprimanded Asta for his physical strength and nakama being the causes of his victory until now, he also gave him a hint to understand his own power. While magic and anti-magic are polar opposites, their similarity lies in the fact that they both are powers. Asta has to feel it surging through his body and channel it into his sword. With this piece of knowledge, Asta came up with an attack similar to when he had used Noelle’s mana. It was fast and long-range, and he FINALLY landed a hit on Gadjah!

The juxtaposition of the two fights of Asta and Yami was great. I have always believed that there is some connection between their magic. And we love to see a “like father (figure), like son” moment, don’t we? [sighs in manga]

Progress of the Magic Knights

In his fight with Asta, Gadjah remarked that all the magic knights from the Clover Kingdom have also been persistent in their efforts to grow stronger. This means they’re growing stronger quickly. The same was reported to Lolopechika in the meeting of all the Spirit Guardians.

Undine was proud that she and Lolopechika have been training Noelle and Secre to the point that they have made tremendous progress. Potrof tells them all that Rill and Charmy are geniuses with using their magic by Mana Words. Mimosa and Charlotte have also been doing well, according to Sarado, and Finral’s “inner storm” is being nurtured.

As for Leopold, Floga noticed that even though he had immense potential, something held him back in fights. When inquired upon, we realize the immense pressure on him with his elder sister and brother being so powerful. He feels there is a vast gulf between his strength and theirs, and no matter how much he tries, he only feels he cannot reach them. Leopold is also one of my favorite characters, and it is moments like these that make these characters feel a little more real than just 2D figures.

The pressure to even get the chance to stand at an equal footing with Mereoleona and Fuegoleon must weigh so heavy on him, especially since he could not even protect the Crimson Lion squad in their absence. It might be a tiny detail, but it gives a whole new perspective on Leopold’s struggle & conflict. However, Floga told him to see him for what he is and focus on his own strengths – one of them being the strength to endure and patience to get stronger. You’re a good boy, Leo! You’ll do it; keep going!

We finally got some insights into the notorious Spade Kingdom, and it was nothing pleasant to witness. And left us questioning so many things instead. We first see people of the Spade Kingdom being forced by the soldiers into a garrison to “contribute to the prosperity” of their kingdom. Then we see few cloaked figures in the shadows, showing clear unease at the events unfolding in front of them but cannot help.

These people are the Resistance and are suddenly discovered by the soldiers. They fight, eventually leading to five of them sacrificing their mana for their comrade, Ralph. All for crossing the strong magic region and reaching the Clover Kingdom. They presumably want help, but what is odd is just as he was left with no choice but to jump in an icy river with the soldiers behind him, he calls out “Yuno-sama“. And we only know one Yuno in the Black Clover universe, the orphan and rival-brother of Asta.

Just what might be the connection of these Resistance forces with Yuno? What are they trying to accomplish in such a pitiful state? Speaking of pitiful state…

Wake everyone up, for they are here! The villain that spread terror throughout three kingdoms without even making an appearance was finally shown. The silhouette behind the man in a crown – whom we can safely assume is the ruler of the Spade Kingdom – sent chills down my spine! It is clear this man is the vessel for a devil and the root of destruction in the Diamond Kingdom and plans to evade the other two kingdoms as well! I cannot wait to find out more about the devil, even though this does look scary, LOL.

Things have finally begun to pick up the pace, and we’re all here for it! The anime is going into the behind-the-scenes of some manga events, which is a good way to build character and plot depth. The animation was better than the last episode, although still not as amazing as a few earlier action episodes. The next episode preview has also left us asking for more, and the title “Five-Leaf Grimoire” points us at Asta’s devil. I can’t wait for the next episode!!