Sasuke is a man of his word and that means, when he says that he'll kill Boruto. HE WILL KILL BORUTO, if needed. 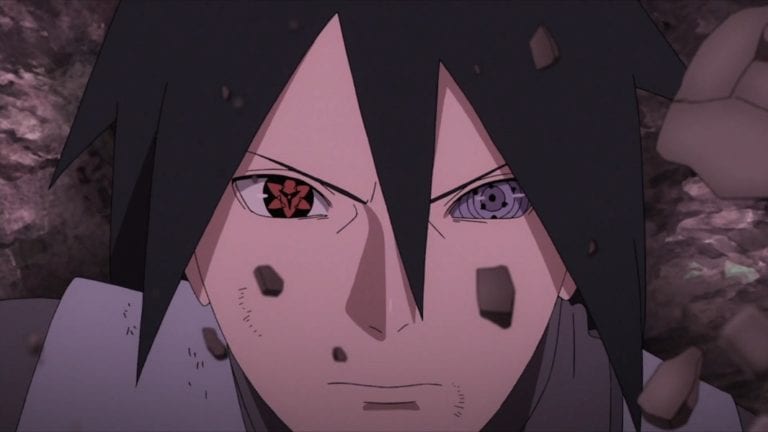 Boruto manga has always been various steps ahead of its anime counterpart. It has stayed true to the traits of characters from Naruto and Shippuden. Also, the tone of the manga is very similar to its predecessors. In the latest chapter too, when the tables have turned on Naruto, the other characters play their part efficiently to help him. Especially the Shadow Hokage, Sasuke.

Sasuke has always been shown to be very intelligent and the one with the most realistic approach to things going on around him.

We get a glimpse of his smartness and ability to think on his toes in the recent chapters. He understands whatever Amado relays at one go. When the villagers and the Hokages’ office learn that Isshiki has launched an attack on the village, it was left on Naruto and Sasuke to deal with the issue. Naruto engages Isshiki in a battle while holding back as unleashing his full powers can destroy the Village. Meanwhile Sasuke is seen with Boruto having a chat.

Why would Sasuke vow to kill Boruto?

During their chat, Boruto is eager to fight alongside Naruto and Sasuke. Although he’s very well aware that him joining the battle would be a hindrance to both Naruto and Sasuke. To which Sasuke exclaims that he can be of help in the fight. If he can control the power of Karma during the fight.

Boruto looks puzzled as to how Sasuke came to know about it. The latter then explains how Sarada filled him in on the details of their encounter with Boro. He goes on to say that he knows how Momoshiki took over Boruto during the fight and due to this fact, Boruto is still reluctant to join the fight.

Boruto’s afraid that in the midst of the fight he might get possessed by Momoshiki. This will lead to him not only to fight against his own father but also his sensei. And, in case he wins, then he’ll be the one laying waste to the entire planet.

Seeing his only student worry about the circumstances of the future, Sasuke butts in. He explains to him that there’s no need to worry and that he is there to stop Boruto, if at all Momoshiki takes over him. If need be, Sasuke himself will kill Boruto as Naruto won’t be able to harm his own son.

This shows how strong Sasukes’ resolve is and how he’s able to keep his mind calm even in the most dire situations. It also emphasizes on one of his characteristics of being able to take any path as long as it meets the goal.

But will Sasuke really kill Boruto?

Ever since his introduction Sasuke has always been shown choosing the path that’ll make him achieve his goal in a much faster and efficient manner. Be it leaving Konoha, killing Orochimaru, stabbing Karin, attempting to kill Sakura and Kakashi, getting Itachis’ eyes to become stronger etc, we’ve seen Sasuke think only about the goal he’s about to achieve. He also managed to achieve all of his goals except those in which Naruto interfered. This shows that Sasuke is a man of his word and he will absolutely do anything to keep it.

That means, when he says that he’ll kill Boruto, HE WILL KILL BORUTO, if needed.

But even though Sasuke vowed to kill Boruto, it’s given that he will not rush into taking this decision. He will absolutely keep it as a last resort. This is displayed when Boruto asks Sasuke for his headband and the sensei hands it over to his pupil and asks it to be returned post the fight. Showing that Sasuke still hopes that everything will turn out fine and they’ll return home together. However, having seen the flash forward scene at the start of the series, it seems more likely that Sasuke will be the one to fall in the battle. Well, let’s hope that doesn’t happen too!

What do you think of Sasuke and his resolve to kill Boruto? Do you think he’ll actually do it? Or has the legendary Uchicha gone soft with age?