A bronze statue of Straw Hats archealogist Nico Robin was unveiled in creator Eiichiro Oda's hometown of Kumamoto in Japan. 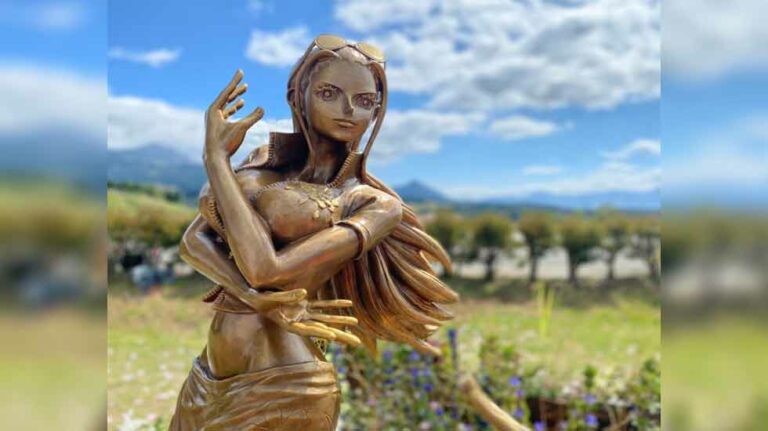 A bronze statue of Straw Hats archaeologist Nico Robin was unveiled in creator Eiichiro Oda’s hometown of Kumamoto in Japan.

A special illustration was drawn by Oda to commemorate the occassion.

Robin’s statue in the latest addition and 8th in the line up of Straw Hat statues that have been erected in Kumamoto, to celebrate the 1000 episode milestone of One Piece anime.

Before Robin, statues of Franky, Chopper, Luffy, Brook and Nami were unveiled in Oda’s hometown. Zoro’s statue is set to be unveiled next.

Oda, a Kumamoto native, had donated around 800 million yen ($7.1 Million) for the earthquake relief in the area. The statues are being erected in affected areas to commemorate it along with the 1000 episode celebrations.

The 1000th episode of One Piece is also inspiring a video collection of five short dramas titled “We Are One!”. The official drama episodes will launch on the newly opened website of “weareone” and also on the franchise’s YouTube channel on August 30.

A teaser video was also released on July 22, for the upcoming drama collection based on the readers of Eiichiro Oda’s One Piece manga.

The anime adaptation of Eiichiro Oda’s One Piece manga premiered in 1999. The 100th manga volume shipped on September 3. Oda published the 1,000th chapter in this year’s combined 5th/6th issue of Weekly Shonen Jump magazine on January 4.