Nami Bronze Statue Gets Added To The Kumamoto Reconstruction Project 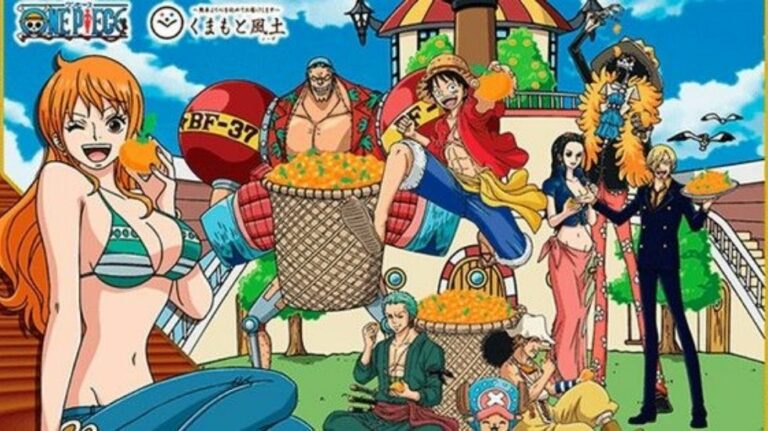 Last year in November the One Piece statue revealing resumed with “Iron Man” Franky’s figure after the temporary postponement of the collaborative project due to the spread of the coronavirus in early 2020. Today, the bronze statue of the “Cat Burglar” Nami, the navigator of the Straw Hat Pirates is unveiled to the public.

On April 16th, 2016, a 7.0 magnitude earthquake devastated the Kumamoto Prefecture. Both this earthquake and its foreshock caused massive damage to the area. Approximately, the earthquake did over $5 billion of damage, leveling homes, businesses, and several important historical sites.

In the weeks following the event, Kumamoto native Eiichiro Oda, a long-time supporter of the earthquake-stricken area, opened his wallet to gift the area 800 million yen (US$8 million). Oda donated the amount in two separate gifts, one for 500 million yen under Luffy’s name and the second donation of 300 million yen.

The hit manga creator Oda has maintained strong ties with the area. He also worked on several other recovery projects. Including making train wrappings, giving new art to people who donated to rebuilding charities, and several lines of collaboration products that gave all of their profit to earthquake recovery projects.

As a thank you for this donation, the government erected a bronze statue of Luffy(174 centimeters high) in November 2018. This statue is outside the Kumamoto Prefectural Government Office and its inauguration celebrates Oda getting a prefectural honor for his service to recovery efforts. It was then announced that eight other statues will join Luffy; each one placed in an area particularly damaged by the earthquake.

In 2019, the first two of these statues were unveiled. A statue of Sanji, placed in the town of Mashiki. And a statue of Usopp, erected in front of Aso station. 2020 has seen the addition of three more statues with Tony Tony Chopper appearing at Kumamoto City Zoological and Botanical Gardens, Brook in Fureai Hiroba Square in Mifune Town, and then Franky at Takamori Station. In 2021, the statue unveiling started with the statue of Nami at the Tawarayama Village of Exchange Center Moe in Nishihara Village.

The remaining Roronoa Zoro and Nico Robin statues will also be available for the public from later this year. Zoro will appear at Otsu Central Park in Ozu, while Nico will be located near the main entrance of the former Tokai University Campus in Aso.

While statues might seem a bit sketchy to spend relief money, the idea here is to attract tourists to the area. By making Kumamoto’s Tourist spots tourers will pay to use local facilities and buy local goods. Researchers from Shokei University surveyed people who visited the Luffy statue in 2019 and 2020 and estimated that the statue attracts 55,211 visitors per year, putting ¥2.67 billion into the local economy.

To make this whole project more interesting, Oda also wrote a backstory to tie the statues together. According to the story, when Luffy’s crew landed in Kumamoto, they saw the damage and decided to help out. Luffy deployed his crew around the prefecture, sending each one to a place where their skill set would be useful to the local people. Each of the statues has an information board, informing visitors about the local area and the damage it sustained.

Eiichiro Oda’s dedication to his roots is heart-warming. These statues are a great example of how fiction mingles with real life and can help us pull together and pull through a crisis.