Mushoku Tensei Light Novels Will Not Be Getting A Sequel, Author Says

The final volume of the light novel will release in November.

Rifujin na Magonote, the author of Mushoku Tensei light novels, denied in his recent tweet that series will be getting a sequel.

The confusion surrounding the sequel began when Magonote responded to a fan who wanted him to work more on the series.

The author wrote in his reply that he would work on something set 80 years after the events of Mushoku Tensei: Jobless Reincarnation.

“I’m talking about 80 years after the [events of] jobless reincarnation, after the anime and the orcs are done. It depends on how long the anime lasts, so maybe 3-8 years later. Also, I don’t really intend to write it as a ‘sequel to Jobless Reincarnation’,” Magonote’s reply read.

The author then took to twitter again on Sep 17, 2022, to clarify that the new work that he mentioned, was definitely not a sequel to the novels.

Since the title of this new work was not decided, Magonote was sure that people would assume it to be a sequel to the light novel series. However, he did not want fans to think so and be disappointed when the actual work came out.

Magonote also confirmed that it won’t be a spinoff to the original light novels and it will in no way be related to Rudeus Greyrat, the protagonist of Mushoku Tensei, or any other main characters from the series.

However, the author did admit to the possibility of Lara Greyrat appearing in the story.

“I haven’t written it yet so I don’t know, but she will appear,” the author said.

Mushoku Tensei: Jobless Reincarnation is a Japanese light novel series by Rifujin na Magonote and illustrated by Shirotaka. The 26th and final volume of the light novel will release on Nov 26, 2022 in Japan.

The series is about a jobless and hopeless man who dies after having a sad and withdrawn life and reincarnates in a fantasy world while keeping his memories, determined to enjoy his new life without regrets under the name Rudeus Greyrat.

Originally published on the internet web novel website Shōsetsuka ni Narō in November 2012, a year later it was announced the series would receive a print release under Media Factory’s MF Books imprint with illustrations done by a Pixiv user called Shirotaka.

A manga adaptation by Yuka Fujikawa began serialization in the June 2014 issue of Monthly Comic Flapper. Seven Seas Entertainment licensed the tankōbon volumes of the manga for localization in North America. The company also has licensed the original light novels.

On Syosetu’s rankings, the web novel has made cumulative appearances as the most popular work on the website. An anime television series adaptation by Studio Bind aired from January to December 2021.

As of February 2022, over 10 million copies of the light novels have been sold worldwide. The anime adaptation received overwhelmingly positive responses from both critics and audiences and is considered one of the best anime of 2021. 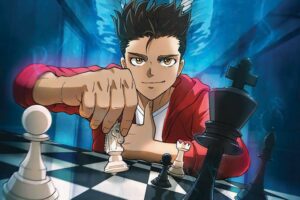