Akutami has detailed Jujutsu Kaisen Domain Expansion to the point that little things have significance in the story. Sometimes, such details add to the characters we already know by giving them more depth.

One such thing can be the domain expansion hand signs that seem just to be cool moves.

Thanks to a thread by user kyleanimescouter on Twitter, we now know more about them. And well, some more research by yours truly.

Let’s understand what they mean for each character.

For starters, we already know that Akutami refers to a lot of Buddhism and Hinduism concepts in Jujutsu Kaisen. Take Mahoraga, for example.

Or Nobara’s cursed technique, if you will. Following the same path, jujutsu kaisen domain expansion hand signs also have Buddhism and Hinduism significance.

They are called mudras, and we can often see them in traditional dances.

But, some Gods also hold these mudras in Japanese and Indian mythology. All the mudras and Gods are related to our favorite characters something like this:

While going through the symbolism, there is an important point to remember. All records vary in how they interpret the myths and Gods that might be the same.

There is an abundance of information on these myths, as many as there are Gods. So, our interpretations also differ highly with each source.

With that out of the way, without wasting any more time:

This God also has the names Emma-ō or Yama in Hindu mythology. He is the king of hell and judges people’s souls. Interestingly, myths also say that he was a human before becoming the king of the Dead Land.

Even Sukuna was a human shaman before becoming a curse. And the original Sukuna, who is the inspiration, is said to be a human as well!

Yakushi Nyorai-In is the inspiration behind Megumi’s hand sign for Chimera Shadow Garden.

Yakushi directly corresponds to Bhaisajyaguru in Hindu Mythology. Both the scriptures refer to him as the God of Medicine or Medicine Buddha.

What is interesting is that Yakushi has 12 Heavenly Generals, and one of them is Mahoraga!

We know Megumi has ten shikigami, and one of them is Mahoraga. But is the “12 generals” here a foreshadow (pun intended) to an upgrade of Megumi’s Ten Shadows Technique?

Jogo – Coffin of the Iron Mountain

As for Jogo, the Japanese deity Daikokuten holds his hand sign. Hey there, Noragami fans!

Shinto scripts refer to Daikokuten as the God of Destruction (but also luck). This deity corresponds to Mahakala in Hindu scripts.

Mahakala is the Kala phase of the God Shiva, where he was the ultimate destroyer of things. It relates a lot to Jogo’s character, with him literally being able to summon a meteor.

We can also connect Jogo’s domain of “mountain” to Kailash, where Shiva lived with his family in peaceful times.

Even the worst of villains get the same treatment as the main characters in Jujutsu Kaisen. So, here he is, Mahito with TWO hand signs, not just one, unlike the others.

The meaning of these hand signs highly resonates with his Jujutsu Kaisen domain expansion.

The upper sign corresponds to Nyorai in Japanese, to whom Hindu scripts refer as Tathagata. They both refer to Buddha or practicing to become Buddha.

Buddha is a fitting contrast to Mahito’s ideology and actions in Jujutsu Kaisen. However, when we look closer, we can see a similarity.

The mudra means “a human practicing to be a buddha,” and Mahito is also trying to achieve enlightenment, of sorts.

As for the lower sign, it refers to Kujaku Myoo-In in Buddhism and one of the Myoo (king of wisdom). Hindu mythology calls her Mahamayuri, which means ‘great peacock.’

Like peacock feeds on insects and snakes, Mahamayuri is said to do the ‘pious act of removing plague or pain from people.’ We can also call it klesha in Hindu mythology.

This symbolism correlates to Mahito a lot as well because of the curse he is. Humans’ hatred and anger, essentially negativity, for each other was the reason for his birth.

And at the end, here is the name you’ve been waiting for:

Gojo is always special. Without fail, there is always a lot of detailing to his character whenever we analyze him. Be it his dominating technique or his eyes in the anime. Similarly, the sign for his Jujutsu Kaisen domain expansion, Infinite Void, is also special.

We get some insight from a user gir72_di_kyun on Twitter: (translation credit to my fellow writer, Srijita)

Gojo’s hand sign is taken from Teishakuten, who is also known as Indra. In Hindu mythology, Indra is the mightiest of gods and is the ruler of all Gods as well.

In Japanese mythology, Teishakuten is the greatest protector who defends both deities and humans against all that is evil. Well? Gojo is also the strongest sorcerer in Jujutsu Kaisen.

He virtually overpowers all other shamans. The symbolism is very remarkable to Gojo’s status.

These symbolisms are all we know until now from the domains we have seen yet. However, there is a high chance from these numerous mudras; we will get to see some more!

In fact, if Kenjaku can use domain expansion in the future, his mudra might come from Fukukenjaku Kannon-In. 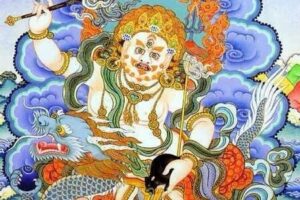 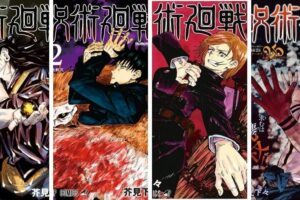 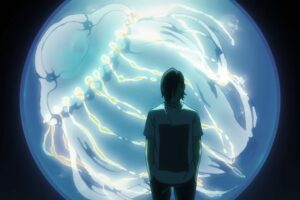