Is Asa Mitaka A Fiend Or Hybrid In Chainsaw Man?

In this article, We try to unravel the peculiar situation of Asa Mitaka portrayed in Chainsaw Man Part 2.

Chainsaw Man manga returned with chapter 98 (part 2) on July 13, 2022, and the fandom is already buzzing about the new antagonist, Asa Mitaka a.k.a the War Devil. While the character was teased in the previews that were released earlier this week, I am pretty sure none us of saw that coming.

While the start might have been ‘chickenish’ compared to Chainsaw Man standards and a bit slow, the manga’s trademark pacing was back soon as we were introduced to a major antagonist with much gore and glory by the time chapter 98 came to an end.

The War Devil caught many of us off-guard and Fujimoto wasted no time in making Denji the target once again. However, there are some doubts revolving around how the whole scenario with Asa Mitaka and the War Devil functions.

It seems like she has given up her body to the War Devil on the verge of death so that she could continue living. But what exactly does that make her? A fiend or a hybrid?

What is the Asa Mitaka conundrum?

Mitaka neither has the features of a fiend or a hybrid from what we saw in the chapter.

She wasn’t a corpse when the War Devil took over her body, nor does her head have a particular shape as fiends usually have.

Similarly, Mitaka didn’t use a trigger to activate her powers, like we have seen in the case of hybrids, namely Denji or Reze. On top of that, she didn’t seem to have any memory of her past self either as her personality had turned into that of the War Devil completely.

Mitaka’s appearance and demeanor puts her closest to Makima. However, Makima WAS the Control Devil herself as far as we know, and not the Control Devil somehow possessing a human and retaining its devil persona.

So what exactly is Asa Mitaka?

Fans are speculating that she could fall under an entirely new category, that is neither fiend or hybrid or even a devil. While that could be entirely true, we are leaning towards a different answer altogether.

Is Asa Mitaka a Fiend or Hybrid?

From what we have seen in the previous chapters of Chainsaw Man, Asa Mitaka is a hybrid. While there is still a lot we need to know about Hybrids, there is enough circumstantial evidence which proves that Mitaka is a War Devil Hybrid, just like Denji is a Chainsaw Devil Hybrid.

Before you cry foul, allow me to state the reasons as to why I believe so.

1. The parallels in the first chapter:

Both Denji and Mitaka found themselves at death’s door in these chapters, and in both cases a devil bails them out. By entering a contract with a devil, these characters traversed the imminent danger and managed to stay alive.

It doesn’t end here. The similarity in the way they ‘revived’ and the surprise that their opponent, who had formed a contract with a devil, faces isn’t very different either.

The only problem? Mitaka didn’t retain her human personality as Denji did after he became a hybrid. In Mitaka’s case, it was the War Devil who was in power.

The reason why this happened could be due to the different contracts that both of them entered into with their respective devils. However, before we talk about the contracts and how it affects these two, there is something else I want to point out.

As I mentioned before, the War Devil’s personality seems to have taken over Mitaka. Though peculiar, it is not unprecedent in case of hybrids.

In Chainsaw Man chapter 83, when Makima calls for help, it is the Chainsaw Devil that manifests and not Denji’s hybrid mode.

Makima makes this clear as she is clearly disappointed to find that Denji’s personality had returned come chapter 93 of Chainsaw Man.

Meaning, under some special circumstances, a devil’s personality can take over even if someone is a hybrid.

So, could this be what’s currently happening with Mitaka? Is the devil’s personality only there for a small amount of time? Like Denji mentions in chapter 96, would Mitaka too vaguely remember what the War Devil is currently doing?

We’ll have to wait more chapters to get a concrete answer! Moving on, lets talk about contracts.

Like I said before, there is much that we still don’t know about Hybrids. However, what we know is that there’s always a contract involved when a hybrid is formed; and Mitaka’s situation could probably be explained by the peculiarity of her contract with the War Devil.

Let’s take a look at what the War Devil told Mitaka:

“If you want to live, your body will be mine.”

These are the terms of the contract that the War Devil put forth. And it definitely has a more sinister shade to it than the contract which Denji and Pochita had.

The vibes aside, the important thing to note here is, Pochita offered to be Denji’s heart, and the War Devil took over Mitaka’s body. While Denji seemed to be the show-runner, or more like Pochita let Denji be the showrunner in their contract, the War Devil seemed to have wrested control, in a sneaky way.

And an ignorant, and probably desperate Mitaka, oblivious to what might happen once she accepts the contract, accepted the War Devil’s offer.

Mitaka’s monologue adds more depth to her actions. She wished that she had been more selfish. It is at this precise moment that the devil makes her the offer. So, she took the opportunity and chose not to die, chose to be selfish.

Why Mitaka definitely isn’t a Fiend:

While I gave some clarifications as to why Mitaka is a hybrid, I’d also like to give a couple of reasons as to why she isn’t a fiend.

Firstly, Mitaka wasn’t dead when the War Devil took over her body. Fiends are only formed when a devil takes over a corpse, which is not the case here.

Second, Mitaka’s head did not have a peculiar shape that is reminiscent of all the fiends we have seen in the series till now. Be it Power or Long or Beam, all of their heads had a peculiar shape, which Mitaka lacks.

The scars on her face are noteworthy, and something that begs to be discussed more (crossed arms usually depict war), but the they don’t fit the bill here and Mitaka certainly doesn’t qualify to be a fiend, unless specified otherwise by Fujimoto himself in the future.

However, it is also entirely possible that our assumption about Mitaka being a Hybrid is completely wrong and she could be an entirely new category falling out of these two, as fans suggest.

What are your thoughts on Mitaka and her contract with the War Devil? Do you think she is a fiend or a hybrid? Let us know in the comment section below! You can read the latest Chainsaw Man chapters for free on Manga Plus app by Shueisha. 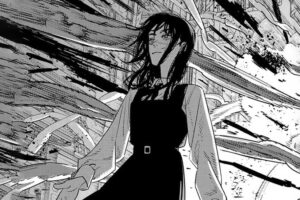