Right from the get-go, we know that Gojo Satoru is the strongest shaman alive. If that's the case, then how did Pseudo-Geto manage to seal him in the prison realm? Read the blog to find out! 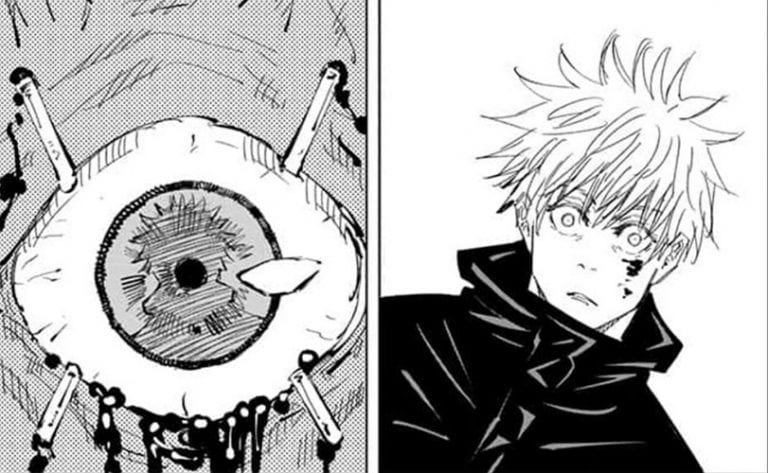 Right from the get-go, we know that Gojo Satoru is the strongest shaman alive. In fact, the story puts a strong emphasis on his strength multiple times. It is clearly evident in the way that Gojo toys with his enemies or tells Yuji he will win against Sukuna.

However, perhaps Gojo’s complacency in his strength or just circumstances led to an unthinkable mishap. In the Shibuya Incident, Gojo fell right into the hands of the cursed spirits led by pseudo-Geto.

Kenjaku (the brain possessing Geto) successfully sealed Gojo Satoru in the Prison Realm. And without Gojo around, the odds undeniably favored the curses. Just how could someone as perceptive as Gojo fall into Kenjaku’s plans? What went down at Shibuya between Kenjaku and Gojo? What was Kenjaku’s master plan for Gojo?

How can a person be sealed in Prison Realm?

The Prison Realm is essentially a cursed object. It is an extremely powerful barrier that can trap anything inside it. However, there are a few conditions to trap the target in Prison Realm. So, before executing his master plan, Kenjaku explained to Mahito and the others how the Prison Realm actually seals a person.

But, these conditions were outrageous against Gojo, as Jogo correctly said. With his high speed and perception, it would have been nearly impossible to hold Gojo down. Let alone a whole minute, it was like asking Jogo and the other to die to make Gojo stay at a place for an instant.

Kenjaku knew the absurdity of this plan but had planned out all intricacies beforehand. What was his plan of action?

Gojo’s mind processes things differently than an average human’s mind does. Moreover, his speed is an undisputable advantage. These are the reasons why Gojo could get out of Prison Realm’s range even after the cursed object set its target on him.

It was, thus, imperative for Kenjaku to come up with a plan that would render Gojo motionless. And Kenjaku had a load of time on his hands. He learned from his past failures against Six-Eyes that he could not kill Gojo. So, he carefully laid the groundwork. Well, part of it was luck.

Against Jogo’s protests, Kenjaku explained that one minute for a normal human is barely an instant in Gojo’s brain. Meaning, his brain took only an instant to process the information that a normal brain would process in a minute. This was because of his Six-Eyes ability. Therefore, Kenjaku only needed to stop Gojo’s movements enough to last mere seconds, which would count as a minute in his brain.

For this plan, Kenjaku had the biggest ace up his sleeve that Gojo was painfully oblivious to. The 1000-year old shaman was currently possessing the body of Gojo’s long-dead best friend – Geto Suguru. He had carefully stayed hidden from the jujutsu world’s eyesight ever since he possessed Geto, waiting for this one moment.

Shibuya was an elaborate setup for the very sealing of Gojo. Mahito, Jogo, and Choso played their roles in luring away Gojo’s attention to transfigured humans in Shibuya and forcing him a 0.2 seconds domain expansion. It was a dire situation of annihilating nearly 1000 transfigured humans. So, Gojo missed accounting for other things.

When he finally saw, he was already standing before the Prison Realm. Kenjaku activated it, and as soon as it locked Gojo as its target, Kenjaku made his move. He made a brilliant entrance that stunned Gojo. Geto’s appearance shook the forever calm and composed Gojo Satoru beyond par. Standing before him was a person he had killed at his own hands after Okkotsu almost did.

Immediately at the sight of Suguru, Gojo’s Six-Eyes went over all possibilities. It was truly Suguru, triggering all memories of his youth spent with him. But, in this fraction of time, a minute had already passed long ago. And thus, Gojo’s ability proved to be a curse for him.

Kenjaku (fake Geto) carefully laid a plan to capture Gojo. Jogo, Mahito, and Choso took Gojo’s attention off his circumstances. When Gojo realized where he was, it was too late. Gojo was already a target of Prison Realm.

However, the biggest feat was to hold Gojo within a 4-meter radius of Prison Realm for one minute. For this, Kenjaku used his biggest advantage. He appeared before Gojo in Geto’s body. Seeing his dead best friend threw Gojo’s brain into turmoil.

Gojo’s one minute is different from the average human’s. While his brain was processing Suguru’s presence, one minute had passed already. Hence, Kenjaku successfully captured Gojo in Prison Realm.

So, this is how Gojo fell into the Kenjaku’s plans! He knew that Gojo’s defeat is only possible by tricking him and not by brute force. Gojo’s capture was the first step in the bigger scheme of things for Kenjaku.

Thankfully, there is a way to get Gojo out of Prison Realm. But will the other shamans be successful in getting Gojo out? We can only wait and see! What do you think about Kenjaku’s plan? Let us know in the comments!