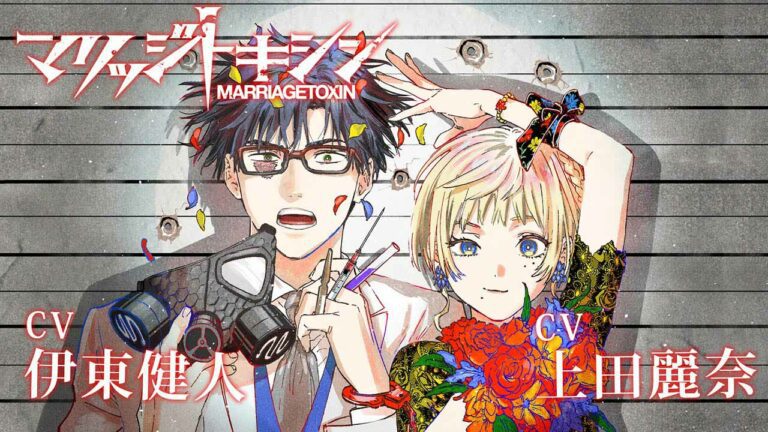 Demon Slayer author Koyoharu Gotouge has written a review about Marriagetoxin manga in its first volume, and also recommended the new manga to readers in the volume’s obi.

“I am rooting for the main character who, in spite of various obstacles (ties), is able to come up with his own answers and move forward! I can’t wait to see the new characters in the book, who will be beautifully illustrated by Yoda-sensei,” Gotouge’s review read.

The obi of the volume contains an illustration of Tanjiro and the author Gotouge itself, where she recommends the manga.

Marriagetoxin‘s volume 1 released on Aug 4, 2022 in Japan. A teaser video was revealed on Aug 2, 2022 to commemorate the release of the volume.

Marriagetoxin is a manga series is written by Jōmyaku and illustrated by Mizuki Yoda. It began serializing on Shueisha Shonen Jump+ platform from April 19, 2022. English translations of the manga are simultaneously released on Manga Plus app.

The manga has currently 14 chapters, and has crossed over 100,000 views on the Manga Plus platform.

The app describes the plot of the manga as follows:

A hitman and a marriage swindler set out on the world’s most grueling battle for marriage! Gero is a young man from a clan of hitmen, which has been in existence for hundreds of years. As someone who’s never gone to school and lived his life dealing in the dark side of the business, he considers himself to have “no prospects with women” and marriage as “something not for him.” However, one day, in fear that their lineage would dissolve, his clan warns Gero that if he doesn’t marry and produce an heir, they would have no choice but to…force his little sister into doing “that.” Driven to his wits’ end, Gero asks the target of his work, a marriage swindler, to…