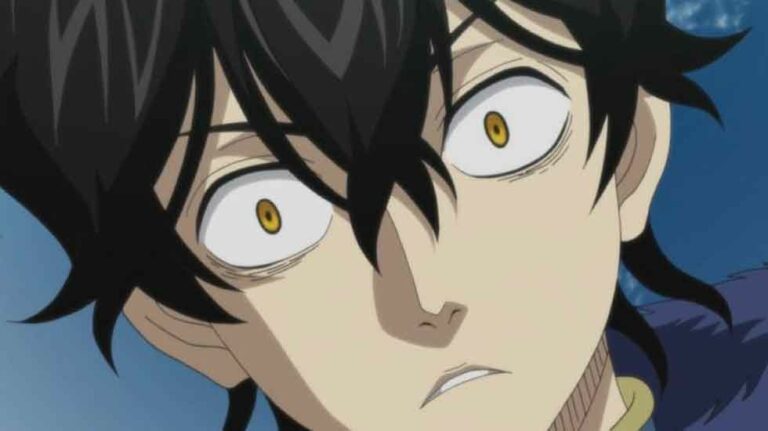 WOAH. Episode 160 of Black Clover was a treat. What a ride! It was expected, too, ever since the Dark Triad arc was announced, as it is an action-filled arc with many defining moments for the series. After the last episode, I was hoping that Studio Pierrot delivers in the next one to portray an important part of the story, and it did! Let us see how the episode proceeded!

In the first scene, we see some Golden Dawn squad members talking about how Yuno has immense (fan-following) uhm, mana that it is a surprise he is a commoner (oh boy aren’t you in for a ride?). The members also admire him for becoming the Vice Captain so quickly. This interaction might seem trivial but it goes to show the development of Yuno with his squad members and the respect they have for him.

Yuno’s past in the Spade Kingdom

In Episode 159, a man from the Spade Kingdom reached the Hage Village church to meet Yuno and tell him something by risking his life. This messenger was Ralph and he bore a shocking message in episode 160: Yuno is a prince of the Spade Kingdom! Let’s be real, all of us had the same reaction as Father and Bell:

Kind of recovering from his shock, Father enquires about Asta, who was abandoned next to Yuno on the same day. But Ralph solemnly disagrees with knowing anyone or anything besides Yuno being the son of the king his father served.

Unlike Father and Bell, Yuno is still skeptical of accepting such apparent nonsense from a Spade Kingdom person. He wants to know the grounds Ralph is speaking on. To prove his veracity, he casts a spell using Flame Magic: Trace Mirage. Yuno is taken back into memories of the past. This is where we learn in detail about Yuno being a royal and his parents.

It starts like a fairytale (technically, we are seeing a fairytale, aren’t we?) in the Spade Kingdom. After being under a harsh winter for a long time, a ray of sunshine and hope streamed through the dark clouds over the kingdom. And with it came into this world Yuno. He was seen as a blessing & his birth was celebrated throughout. He was also pampered and loved by everyone despite being a crybaby!

Betrayal of the Zogratis siblings

We quickly move, and it is shown that the Zogratis siblings used to serve King Ciel. They had just returned from a mission but, against the orders of the King, had killed every one of the rebels. This caused unease in everyone, including Ralph’s father. He asked Ralph to keep an eye on them.

If only. Had Ralph done what his father had said, it is possible that what followed might have never happened. The siblings, now calling themselves “Dark Triad,” turned traitors and invaded the castle. With a mountain of corpses behind them already, they also killed the king and the queen. It was evident that from that moment onwards the kingdom fell into ruins because the three wanted much more than just the throne.

The question arises: how did Yuno reach the Clover Kingdom? In his memories, Ralph shows that his father struggled through the strong magic region to save Yuno. He also entrusted Ralph with telling the truth to Yuno in the future. He sacrificed himself and took down the people who were tailing him after casting a spell to make Yuno reach the Hage village church.

As if all that wasn’t enough to process for both us and Yuno, this happens next:

Yuno receives a communication that the Golden Dawn is under attack and he rushes to help despite protest from Ralph. After all, he has been grown up in the Clover Kingdom and is the Vice-Captain of the Golden Dawn first before any prince. He wanted to reach the base as fast as possible. But alas, it still wasn’t fast enough.

The enemy was not one to wait for time, for it was none other than Zenon with two Dark Disciples. Is it just me, or you felt a chill in the air when Zenon spoke, too? Despite looking calm on the surface, as soon as he spoke, it proved that he is no less of a psychopath. He gave his followers an OK to kill everyone except the “arcane stage mage” without even blinking an eye. Everyone in the Golden Dawn attacked the Dark Disciples who had the devil’s power too!

And on top of it, they could draw 40% of it, which is much more than that of the Dark Disciple Asta defeated. And as it was expected, they couldn’t make a scratch.

In the meanwhile, Zenon found the arcane stage mage, William. Even the captain of the Golden Dawn with his extremely powerful magic was stunned at the power of Zenon. He warned Alecdora to not fight too, but the latter did not hesitate in attacking the devil host. All was for vain, because Zenon used his Bone Magic and directly hit Alecdora, forcing William to use his World Tree Magic to protect both himself and Alecdora.

Before Yuno could return, every one of his nakama who admired and accepted him in the squad was already dead or severely injured. And this is the Golden Dawn, folks. Rage boiled inside Yuno, and he used his Spirit Dive demanding answers! This moment was my absolute favorite. The animation and the dialogue delivery were top-notch, enough to make us feel goosebumps. This moment also goes to show just how much the squad means to Yuno, who almost always seemed emotionless.

But what really could Zenon (and the triad) want from William? Why are they at the Golden Dawn’s base so easily? There are too many questions and no answers!

Even though there was not much action in the episode, it was still an excellent adaptation of (as mentioned earlier) an important part of the arc. It is a juncture where everything truly begins. The animation was a reflection of the manga art, especially the last sequence with Yuno donning the Spirit Dive in anger. Another plus point was that the episode proceeded at a good pace. I have no complaints from this episode and totally am counting back the days to Episode 161 already!

Before ending this review, I would just like you to look at baby Yuno who grew up from a crybaby to the Vice-Captain of Golden Dawn! 😀