Toyotarou talks about the Granolah arc once again and the inside scoop behind its making on the occasion of Dragon Ball Super Volume 17 release. 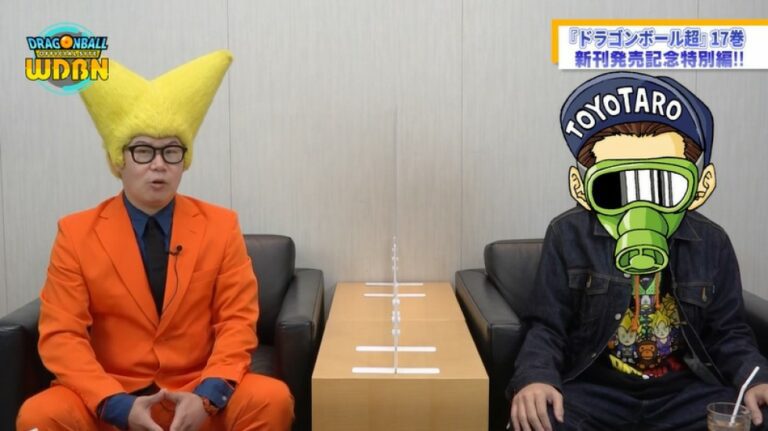 The Dragon Ball official site uploaded a special interview on December 6th, 2021, with none other than Dragon Ball Super Manga’s author: Toyotarō-sensei. The interview hosted by Victory Uchida was part of a special episode of Weekly Dragon Ball News (WDBN).

To commemorate the release of Dragon Ball Super Volume 17 the interview took place. A month ago, the site published an article in which fans from all over the world were asked to write down their questions for the Dragon Ball Super Mangaka. Few questions were selected and answered by Toyotarō himself.

Here is the list of questions answered by Toyotarō. I’ll be diving deep into certain aspects of the interview in other articles so stay tuned for those!

Toyotarō answers it with confidence and straightforwardness – the Kamehameha.

Whether it’s the name, the pose, or the fact that it’s a move by Master Roshi, there’s no technique that comes close to topping the Kamehameha, he said.

The Kamehameha is an iconic move in all of Anime and the most referenced or parodied. From Gintama, Jujutsu Kaisen and Slime to the MCU’s latest flick Shang-Chi, the Kamehameha is known throughout the world, even amongst non-Anime fans.

Victory Uchida says it’s also a technique that is easy to imitate in real life. In fact, during Comic-Con 2019, Sean Schemmel (the English VA of Goku) along with a stampede of fans joined to make the biggest Kamehameha imitation that went down in the history books!

Toyotarō said the basic principles of Kamehameha are visible in all other techniques. And he’s right. Kamehameha is part of the Ki manipulation techniques where you channel Ki from different parts of the body to a single point and release it to a particular target.

While on the topic, Uchida asks him about his favorite scene with Kamehameha? To which Toyotarou said it was the scene where Kaio-ken X 3 & 4 Goku unleashes a powerful Kamehameha to counter Vegeta’s Galick Gun back in the Saiyan Saga. An iconic scene that most fans agree is pretty dope!

Regarding other variations of the technique, Toyotarou mentions the Instant Transmission Kamehameha Goku used against Perfect Cell and the one Goku unleashed from his feet against Piccolo in the 23rd Budokai Tenkaichi.

Toyotaro also mentioned the Kamehameha Goku launched from his feet in the OG Dragon Ball. We were so happy when he mentioned it as only recently we tweeted about the same scene. You can refresh your memory by watching the video on our tweet here:

Uchida remarks how unconventional this Kamehameha is. Very different from the usual ones. Another variant is the one Goku pulled off against Frieza, which Toyotarou mentions.

Usually, Goku uses two hands to fire off a single one. Here he uses both his hands individually to make two. Maybe the power of the single is more concentrated than the two.

So he keeps them at bay and flipped them into the air to distract Frieza (because he can’t sense energy) and finally appears from the sky and kicks him on his face. Toyotarou comments that Goku shot them up like the Sokidan or Spirit Bomb.

He figured that there are various ways the Kamehameha can be used or sourced from. This is because the principle used for firing Kamehameha is the most basic principle for performing ki based attacks.

Question 2: Which form of Goku’s is your favorite?

Without delay, Toyotarou immediately said it is Ultra Instinct – the one with the silver hair.

He believes that, in general, the cooler form is usually the strongest. But he mentions that Super Saiyan Blue is more fun to draw cause he can use more expressions with Goku using that form.

Ultra Instinct is the strongest form, in which Goku needs to be calm and steady so that he doesn’t struggle in a fight, he said. Due to which his expressions in a fight involving MUI has very few expressions.

Uchida uses the word “sacred” when describing Ultra Instinct and I couldn’t have used a better word to describe it. The concept of Ultra Instinct or Migatte no Goku’i more or less implies “Mastery of Self-Movement”.

Its principles are deep-rooted in Eastern Philosophy especially Buddhism and Vedic. Learn more by taking a look at my article on analyzing whether Goku has Mastered Ultra Instinct or not.

However, there were instances where he did lose his composure while fighting in the heat of battle and hence his accuracy on UI dropped. More on this in another article.

Toyotarou mentions that the Prince of all Saiyans feels like he’s carrying the Sins of his ancestors (a lot of baggage).

The guilt enveloping his mind drowned him in darkness about the bleak nature of his race and its fate. The Mangaka expressed his likeness to illustrate his growth as a character.

On the other hand, he says Goku has been a good guy since the start so the internal struggles are a lot less for him.

I think that is true but then again, Goku has been struggling to come in terms of his Saiyan heritage when he found out about it in the Saiyan Saga but now, he managed to accept what he is and what the Saiyans were in the past. Also, unlike Vegeta, Goku knew that not all Saiyans are evil.

The author mentions that he loves using Vegeta to portray the nuances of human psychology.

However, he further adds that he might have a different favorite character to illustrate in the coming months. This makes me wonder… Could it be Gas? Or an entirely new character?

Amongst the characters that are the easiest to draw, Toyotarou says Goku and Vegeta. He draws them the most, so it’s natural.

The one who is difficult to draw in this arc, according to him, is Elec. His nose, eyes and hair are comparatively hard to draw. Finding the right balance between the body parts is the trick and Toyotarou feels he needs to concentrate more to get them right.

Question 4: While drawing female characters, what do you emphasize on?

In the Granolah arc, Macki is a female character who Toyotarou made to appear a lot. He said that he emphasizes the “cute” aspect while drawing girls.

But he admits he finds it hard to draw “cute” than “cool” stuff. So he says he’s working hard to improve on that department.

Toyotarou adds that if he doesn’t concentrate enough, he might accidentally draw the female characters manly. Plus he does admit that illustrating them isn’t his strong suit.

Question 5: Will Bardock continue to appear in the future?

Toyotarou admits that he doesn’t know about Bardock’s appearance after this arc.

But he did say that Bardock plays a pivotal role in the Granolah arc, so there’s something to look forward to.

In regards to how he’ll appear further in the arc, he isn’t allowed to tell. Fans speculate that the much anticipated Bardock vs Gas fight that was missing from the flashback in Chapter 77 will be narrated in upcoming chapters.

Question 5.1: What’s the inside scoop behind Bardock’s appearance in the Granolah arc?

Toyotarou said that the idea for inserting Bardock into the main story came when he was a supervisor for an action figure project not too long ago.

He expressed his clear affection for the father of Goku. So he actually wanted to expand on Bardock’s story in the main canon for a long time. But since he’s dead, he couldn’t find a way.

He further added that it was a challenge bringing Bardock into the current storytelling, apart from side stories, but he was given the opportunity nevertheless. When he pitched the idea to Toriyama, the latter exclaimed “Hell yeah!“

In other words, including Bardock in the Granolah arc and weaving a connection via a flashback was Toyotarou’s idea. Toriyama, in an interview in 2015, did say that flashbacks are the only way to bring Bardock back so he might have suggested that to Toyotarou.

Q: In the future, might we be able to see Bardock in action…?

You really like Bardock, don’t you, Ooishi-san?
But unfortunately, Bardock has been dead for quite some time, so you probably won’t be able to see him in action except in stories of the past. There is the trick of having Shenlong bring him back to life, but by this point, his battle power isn’t high enough, so I think it’d be a bit difficult.

Toyotarou says he always liked Bardock and wanted to know more about him. So he asked Toriyama as much as he could so that he could make a fitting depiction of the fan favorite character.

The next question is an important one and there’s a lot to talk about. I’ll elaborate more about this in another article. So stay tuned!

Question 6: Were the name and design of Vegeta’s Ultra Ego Toyotarou’s ideas?

Well there you have it folks! You heard it right from the man. So Vegeta fans, for all the love your favorite character has been showered on in this arc, thank Toyotarou.

When discussing about the proposal of Ultra Ego Vegeta, Uchida wondered if it was a little over the nose at first, but from his expressions in the interview, he seems to be quite pleased with the outcome.

Toyotarou explains that it’s similar to Ultra Instinct but with a completely different undertone. Plus the suffix “Ego” fits Vegeta’s character pretty well. So that’s how he came up with the form.

He further goes into some detail by analyzing the root meaning behind Ego and Instinct. He said that the original Japanese for Instinct and Ego are similar (Migatte no Goku’i & Wagamama no Goku’i). However, on a closer look Instinct and Ego have similar meanings. In this context, Instinct means that the body moves on its own. Similarly, Ego implies “doing as you please”.

The Mangaka, in short, said that the two words are fundamentally different and that UI & UE are polar opposites of one another. However, while reading it in Japanese the same word can be read as either Instinct Or Ego.

Thus, giving us an insight into the conceptualization of the forms. Also, how it very well fits with the two leading characters.

In terms of the design and attitude, Toyotarou said he had Beerus in mind and wanted to capture his essence.

For Ultra Instinct, he speculated on whether Toriyama had Whis’ white hair in mind while coming up with Goku’s silver-haired form. So he’s not sure about it himself.

Regarding Ultra Ego’s official color version, Uchida announced that it’ll be revealed for the first time in the upcoming event Jump Festa which will take place on Dec 18-19.

Question 7: What are the names of the Galactic Patrol members?

A geeky question, remarked Uchida. A ton of characters’ introduction takes place in the Galactic Patrol arc or the Moro arc, so fans want to know the names of the other Patrol members apart from Merus, Jaco and Irico.

The new characters were a part of Volume 13’s back cover.

Here is the list of names of those new characters:

A little titbit on 6 & 7 Katsubushi and Niboshi – they work at the Galactic Prison and not actually part of the Patrol squad that surveys the Galaxy for bad guys.

Well, there you have it. That’s all for the important stuff from the interview covering the occasion of Volume 17 release. Be sure to stay tuned for analysis on this piece. Until then, Sayonara!