Attack On Titan: Why Was Eren Imprisoned In Season 4?

The Survey Corps have protected Eren with their lives ever since the beginning of the series. Therefore, it came as a huge surprise when we found Eren being jailed after the attack on Liberio. However, the reason Eren was jailed only amplified the values of the Survey Corps; protect Eren, no matter what it takes. 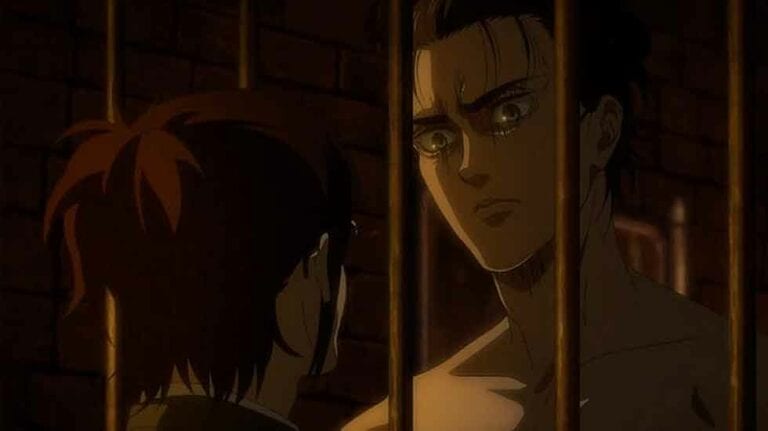 The Survey Corps have protected Eren with their lives ever since the beginning of the series. Therefore, it came as a huge surprise when we found Eren being jailed after the attack on Liberio. It raised questions on the current dynamic between Eren and the regiment, along with whether a breach of trust has taken place.

However, the reason Eren was jailed only amplified the values of the Survey Corps; protect Eren, no matter what it takes.

The effect of the Liberio Raid

Simple answer- the raid wasn’t supposed to be this disastrous. The reason behind the corps’ hostility towards Eren is precisely this. The attack on Liberio was not a planned attack. Eren, on his own, went into the enemy’s territory, knowing the Survey Corps will have no choice but to follow him. To understand what triggered Eren into becoming so violent, check this article out.

In brief, Eren seemed to have crafted a plan with the Survey Corps’ biggest enemy. Zeke Yeager is a touchy subject for the regiment and rightfully so, hence it makes sense why they weren’t confident in this plan. Moreover, no matter how dire things would get, the Corps would never dare put the lives of civilians on line.

Eren’s plan was risky, and we all know how devastating it was, with so many innocent lives lost. Not to mention, they lost Sasha. For someone like Eren who valued his friends’ above everything, it seemed out of character for him to risk their lives. This apparent coercion of the regiment put Eren in a bad light; they hypothesized that he is under Zeke’s control.

The reason for this is because prior to going rogue, Eren was a completely different person! He rejected Zeke’s plan on partial rumbling due to his strong morals, so this sudden shift in him led to everyone around him believing that his actions was a result of Zeke’s control of him. This means that the Surve Corps put the blame of Eren’s violence on Zeke, and the volunteers.

Furthermore, it is important to go over why the Survey Corps and Zeke teamed up. Zeke was at a powerful advantage due to the knowledge and technology he possessed. To save Paradis, they had little choice but to agree with Zeke, the man who cost them the whole regiment, and Erwin Smith.

With only a year left in his term, they were under constant pressure now to use Zeke. For that, they had no choice but to get him from Marley. Due to the lack of trust between both parties still, it is valid why the Corps couldn’t fathom Eren’s actions and blamed it all on Zeke.

Going all with the aforementioned hypothesis, the Survey Corps was not ready to give up on Eren just yet. On the other hand, the military police and the Premiere, Darius Zackley had other plans. Their trust of Eren had dissipated and they were in the process of finding a successor. Along with Pixis, Hange decided that capturing the volunteers is the first thing to be done to curb Zeke’s growing influence.

Why? It’s because Yelena had met Eren without anyone’s permission. This was a serious red flag. She was Zeke’s most passionate supporter, so it wouldn’t come as a surprise if she played a hand in Zeke and Eren’s partnership. Clearly, it shows that it was hard for Eren’s close ones to believe that he could actively make a decision like this.

So, why was Eren in jail?

Eren was imprisoned in Season 4 to keep him away from Zeke and prevent him from going rogue again. It was more important than ever to curb any “influence” that Eren may be under to vouch for his survival.

The Survey Corps believed Eren would do anything to save Paradis, but the way he did so made it look like he was forced. Basically, their image of Eren was so solidified that this new Eren couldn’t really be digested by them.

Now, with the assumption that Eren is under the influence of Zeke, it was protocol to keep them away. For all they knew, Zeke could’ve used Eren’s Founding Titan for his own selfish gains. To “save” Eren from Zeke it was imperative to make sure the brothers do not come into contact. The aim of jailing Eren was to isolate him from Zeke and the volunteers and not contain him.

To his friends, he was the same Eren they grew up with. A prime example is how Hange tries to warm up to him despite his hostility. They didn’t see him as a threat, but as a victim of third parties with may more information. Zeke was therefore kept under Levi’s supervision, so that he could be eliminated when needed.

Unfortunately, this was not how it was. Eren willingly did what he had to, keeping his comrades in the dark. As the military coup plays out, it becomes more evident that the real “threat” was the ideology spread through Eren’s actions that culminated into the formation of the “yeagerists”.

Despite the precautions taken, Eren willingly commits another crime to add to his ever growing list- jailbreak. On the other hand, Zeke too is ready to escape.

Eren was put in jail because the Survey Corps thought his violent actions were a result of him being under Zeke’s influence. They completely distrusted Zeke but maintained their faith in Eren, believing that he’d never take a path this bloody or betray his friends. Additionally, it was to isolate him from the volunteers who had comfortably blended into the military so that there is no covert exchanges between the two parties. However, Eren proves this hunch wrong by letting the “yeagerists” help his escape to get to Zeke.

Currently, both brothers are in the process of reaching each other. While we can’t say what the brothers will do when they get together, it’s disheartening to see how the cherished relation between the Corps and Eren has been strained forever.

2 thoughts on “Attack On Titan: Why Was Eren Imprisoned In Season 4?”