Attack On Titan: Why Did Zeke Betray Marley & Team Up With Paradis? 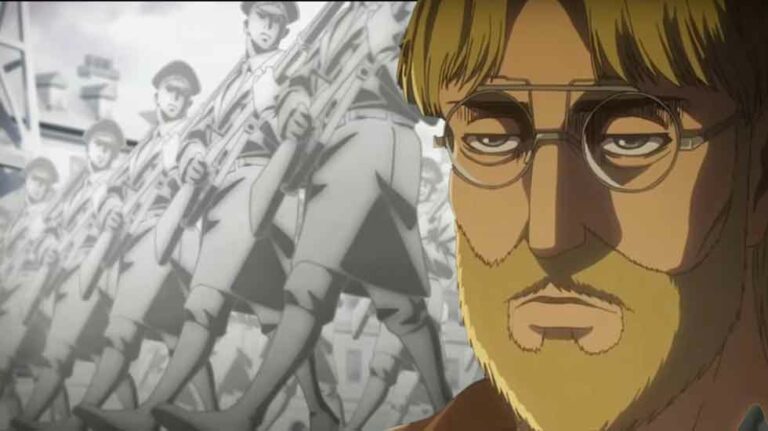 When Jean leads Falco and Gabi to the “ringleader” of the Liberio raid, no one expects to see Zeke Jeager. He is not a prisoner of war. Instead, it turns out that Zeke “dying” at the hands of Levi and Eren attacking Liberio was all a precalculated move, which he had masterminded. But why did Zeke betray Marley and work with Survey corps and Eren?

The following article contains major spoilers from the Attack on Titan manga, read ahead at your own discretion!

Contents hide
Zeke rendezvouz with Survey Corps:
Why did Zeke betray Marley?
The hatred of Eldians acted as a glue for world peace
Zeke can’t confess about his royal blood
Why did the Survey Corps agree to work with Zeke?
TL;DR

Firstly, let’s understand how did Zeke even come into contact with the Survey Corps.

A year after the failure of the Paradis Operation i.e three years before the current arc, Marley started to send survey fleets to Paradis. None of them returned. Why? Because Zeke managed to put some of his devoted followers on board, hoping that they would carry out his message to the Survey Corps, and Eren specifically. The message? He wanted to save Paradis from the clutches of Marley! He called himself a true Eldian restorationist. And for that reason alone, he reached out to the survey corps.

While the Survey Corps have already captured crew members of one ship, another one appears. This specific one had Yelena and Onyankopon, who are anti Marleyan volunteers. Yelena shoots down her “comrades” and agrees to talk with the Corps.

Now knowing their primary goal, Hange agrees to listen to the conditions that Zeke had. They were;

In return, he guaranteed Paradis safety and technology while acting like a mediator. Now, let’s break it down why he reached out to them. He also mentioned that he has a secret plan to solve the problem.

Why did Zeke betray Marley?

Zeke betrayed Marley because he could not agree to the atrocities that they had commited to the Eldians. Though it seems hypocritic for Zeke to feel so, he had his own reasons for going through with his plans. Let’s understand some of them here.

Obviously, Zeke is not on Marley’s side. He wants the Founding Titan for a completely different reason which was his “secret plan”. Therefore, it made sense that he would reach out to the Survey Corps and finally end the Marleyan torture on Paradis (albeit in different ways). After all, an enemy’s enemy is a friend!

Zeke seems to be a pacifist, which would make it seem like he was in no mood to play the role of a double agent anymore. It was more peaceful to get the Founding Titan through negotiation rather than a fight.

Moreover, there was no way Zeke could tell this plan to Marley. Firstly, as a restorationist, he hates what Marley has done to Eldians, so its only normal that Zeke would not want to ever collaborate with Marley. Secondly, he needs to personally get to Eren, so that they could finally use the power of the Founding Titan. Marley would want to get rid of Eren immediately, which would hamper Zeke’s plan.

Thirdly, telling Marley would be shooting himself in the foot. Here’s why:

The hatred of Eldians acted as a glue for world peace

The whole world had a common hatred for Eldians, and this hatred bound the world together and maintained world peace. True to our world, even the countries in the Attack on Titan universe hate each other, but their hatred for Eldians is stronger.

The second it became obvious that the Eldians are not as useful as they were before, the Mid East Alliance launched an attack on Marley. Therefore, the sole idea of Eldians not existing will give the countries who are now victim of Marley’s expansionist policy to strike back.

Doesn’t this remind you of what happened with the Eldian Empire? Hence, Marley would not want the Eldian race to be wiped out.

Marley wants the Founding Titan so that the rumbling cannot ever be activated. If Zeke confessed to having royal blood, his plan would never succeed and would only cause more troubles.

It can be assumed that Zeke’s grandparents would be turned into mindless titans. Moreover, Zeke would be forced to father as many children as possible so that Marley can have the Founding Titan with someone of royal descent.

Hence, it makes sense that Zeke reached out to the Survey Corps for help, while cleverly hiding the real idea while making them do everything he wanted.

Why did the Survey Corps agree to work with Zeke?

The conditions caused an uproar during the meeting, and rightfully so. The Survey Corps’ ideas were conflicting with others, as always. However, as the senior officials brought up logical arguments, it felt as if the plan would not be followed through.

That is, until Eren Jeager decides to finally speak up. He recalls the day he had physical contact with Dina and how it activated the Founding Titan’s powers. This justifies the condition Zeke had of having the Founding Titan and a titan with royal blood together, something the officials were suspicious of.

With this new information, Zeke’s plan made more sense as he figured how to get around the vow. This meant that Paradis finally had a chance to counter attack while using the Founding Titan’s actual abilities. Hange was therefore getting convinced to give this a shot.

Importantly, Paradis needed the support of the volunteers. With their technology, Paradis would be able to defend themselves from the upcoming enemy fleets. The Survey Corps therefore had a vested interest in the newly formed “friendship” with the volunteers.

For example, the volunteers introduced them to mobile weapons, wireless communications and gave them the idea of a port. Without agreeing to Zeke’s plan, Paradis would not have been able to benefit from the technology they had been kept away from for years.

In short, both parties collaborated with each other for their own interests. Zeke teamed up with the Survey Corps to peacefully acquire the Founding Titan and use it by coming in contact with Eren. The Survey Corps agreed to Zeke’s plan to make use of the technology available to develop the island’s defenses.

It is important to consider that those on Paradis did not know what Zeke’s secret plan truly was. Not only that, but even Eren had his own interests in suddenly agreeing to Zeke’s actual plan. Its confusing, we know!

Do you think there was more to why Zeke and the Survey Corps aligned together? Let us know in the comments below.