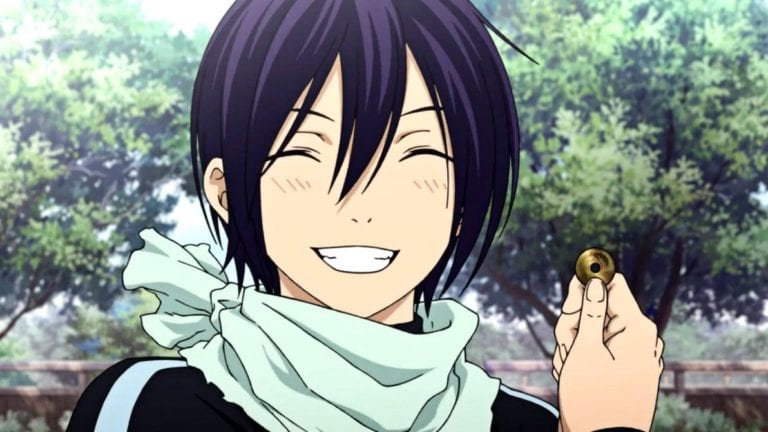 Yato is an obscure shrine less God who one day aims to make it big. In order to climb the ladder of fame as a God (the competition is kinda tough here too), Yato is ready to take up all kinds of odd jobs that he comes across. This ranges from finding lost cats to cleaning bathrooms of random people. In fact, according to his ad, Yato is the go to person, the delivery God, to get any of your work done without any hassle.

But regardless of the jobs that he takes, he only charges a fee of 5 yen. This fee literally amounts to nothing. If Yato continues doing this, it will be a long time before his dreams of buying a large house and being surrounded by multiple maidens come true.

Not just that, this ridiculous amount has often left his clients or followers dumbfounded. There are many instances when his so-called customers were also confused about the fee when Yato held up only 5 fingers to relay his charges.

Five thousand? Five hundred thousand? How much could this freak in the sweatsuit be charging?

However, there is a reason behind why Yato-gami only accepts only 5 yen offerings. And it is not because he is on the lower rungs of the Takamagahara.

Why does Yato charge only 5 yen?

Yato charges only 5-yen for his services because 5-yen offerings are considered to bring good ties and are tied with the concept of “good luck”. Adachitoka gave a detailed explanation about this in the first volume of Noragami.

At Japanese shrines, the monetary offerings of 5-yen is considered to be a standard considering its symbolism in their culture. The Japanese word for 5-yen coin is “Go-en”. This is a homonym which can also be used to refer to good ties and good relationships. This reference is often seen in the Noragami series.

The term “en” from “goen” is a term for encounters, relationships and casual connections. This is closely connected to fate because even seemingly random encounters can have a profound influence on those who are involved in it.

The offering of 5-yen is often considered as a prayer for being blessed with good ties. In shinto shrines, 5-yen offerings are made to establish a good connection with the deity of that shrine. In Noragami, when Yato accepts a 5-yen offering he makes a contract with the customer, finalizing it by saying “May you be blessed with good ties!” or as in the anime “May our fates be intertwined!”