November 15: Happy Birthday, Noelle! Here Are Some Of The Best Moments Of The Royalty 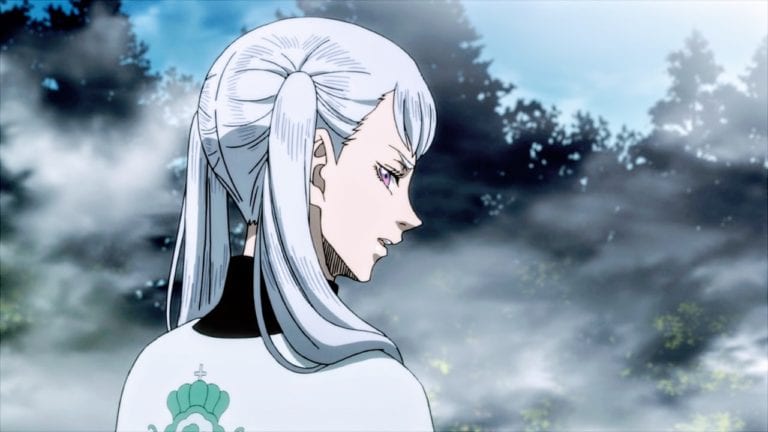 The tsundere royalty who has seen a big jump in character development; from being an overpowered daughter of a royal house to a strong nakama in the Black Bulls, from being ostracized by her siblings to defeating her brother on her own, from being a haughty royalty to being our beloved girl, she has done it all.

Noelle Silva, the second daughter of the House Silva & a proud member of the Black Bulls, celebrated her birthday on the 15th (hopefully with Asta ?) and we just had to come up with some of her best moments in Black Clover! I know, I know, this is a couple of days late. But still, here we go…

When she truly knew she belonged in Black Bulls

After being ridiculed for such a long time for her worse than average magic skills, she might have put her tsundere front up, but Noelle was scared and hurt on the inside. When the Black Bulls discovered her out-of-control magic, she thought they would mock her too, as all the people had. But she was in for a surprise, as Asta did the exact opposite – he was amazed by her mana. The other members did not point at her weaknesses instead made her feel a part of the squad because they all were “failures”! They encouraged her to work hard, like all of them which made her feel like she finally belonged somewhere.

It was the simple kindness & acknowledgement that the Black Bulls showed to her that touched her because she hadn’t received any of it all her life.

When she found her first new spell

The best thing about Black Clover might be the spells & attacks but the way these are acquired or inscribed in the grimoires of the characters is pretty special too. The experiences, events, emotions, training among other things that a person lives through brings them new spells. While Noelle had an immense amount of magic, she didn’t have proper spells. When she, Asta & Magna go on a seemingly-boring mission of boar hunting in Sosshi Village, they discover and encounter Heath Grice, who was looking for a Magic Stone.

The fight gets highly tense, as even Magna gets wounded. Noelle tries to hit Heath but misses, which lowers her confidence a lot. But when a child of the village asks her to protect them, she realizes that she has the potential and the power to do so. Her grimoire opens and she finds her first new spell – the Sea Dragon’s Nest and protects the villagers from the icicles attack by Heath and his men.

This was but the beginning of Noelle’s character development and came at an important time, which allowed Asta and Magna to defeat Heath successfully.

When she defeated Solid at his own game

In the battle for Royal Knights, Noelle’s team was set up against Solid’s team. Noelle had always been picked on by her siblings – especially Solid & Nebra – for not being able to control her magic and being a weak royal. Solid was smug about fighting a worthless fight, but he didn’t know that the Noelle of the past and the Noelle of now were completely different. Noelle had been acknowledged by people who were stronger than her & encouraged on by her friends at the Black Bulls. Even when he saw her powerful Sea Dragon’s Roar, Solid thought Noelle would never be able to hit him.

When Noelle said “It’s alright if I hit you, right?” it was one hell of a badass moment that told not only her brother but also the viewers that she trusts herself now.

When she almost (!) got Vetto

Without even reminding of this moment, it still remains one of the most iconic moments of Noelle. Whenever the Black Bulls are in a pinch, Noelle proves herself. When Vetto had nearly ended the senpais, Luck & Magna, he proceeded to defeat Kiato & Kahono. Vetto broke Kiato’s leg and rendered Kahono voiceless, the latter spending her last magic to encourage the hesitant and scared Noelle to protect her friends.

She gains a new spell, and her magic shakes the entire temple. She even calls herself Noelle Silva of Black Bulls instead of a royal. She powers through Vetto’s magic and takes off his arm. The people of the Seabed Temple called her a goddess, like they should!

It is always a pleasure seeing the characters of Black Clover power-up (unless they are villains, duh) but Noelle’s discovery of her mother’s Valkyrie Armor was a critical moment in the fight against the elves as well as in proving herself to her siblings. In a state where the older siblings – Nozel, Nebra, and Solid were defeated and on the verge of giving up, Noelle displayed her magical prowess.

She used her quick thinking & her newfound spell to beat the elf even Nozel was having a hard time against. And how! She gained the power of her mother, Acier Silva, the Valkyrie Armor she had used in her fierce battles. Noelle reminded Nozel of their mother and realized that he was wrong in holding her down. Nebra and Solid also realized how mistaken they were in underestimating Noelle, as she was at least as, and maybe even more, powerful as her siblings. You go, Noelle!

When she supported the Black Bulls with her magic

It was nearly impossible for the Black Bulls to beat Fana’s Salamander spirit had it not been for Noelle’s support. If she hadn’t trusted herself and her magic into the Sea Dragon’s Roar attack and hurt Salamander & Fana the way she did, it would not have been possible for Asta to use his anti-magic against the spirit. Noelle’s magic made sure to render Fana unable to attack them for a while and Salamander to be at full capacity. It is moments like these that tell us how important Noelle’s role in Black Bulls is, not just individually, but also as a unit.

When she found Nozel in Dorothy’s Glamour World

With his face always stoic and expressions colder than ice, Nozel is the upright eldest son of the Silva family & the captain of Silver Eagles. But behind all this, he is the nii-sama of Noelle who deeply cares for her. He rarely shows it (can we just call it the Silva family trait now?) but he loves her. And we love these small interactions between the eldest and youngest!

The funniest and best was when Dorothy took Noelle into her Glamour World, and she encountered her brother – but in an unfamiliar state. The distant nii-sama was suddenly full of love and affection, which left both Noelle and us stunned. Although it was but a mirage created by Dorothy, we can safely say that it was truly how much Nozel loves Noelle!

When she made a sandwich

She attacc, she protecc but most importantly she make (and be) a snacc. Our kawaii tsundere is one for the books, isn’t she?

Do you have any other favorite moments of Noelle? Let us know in the comments!