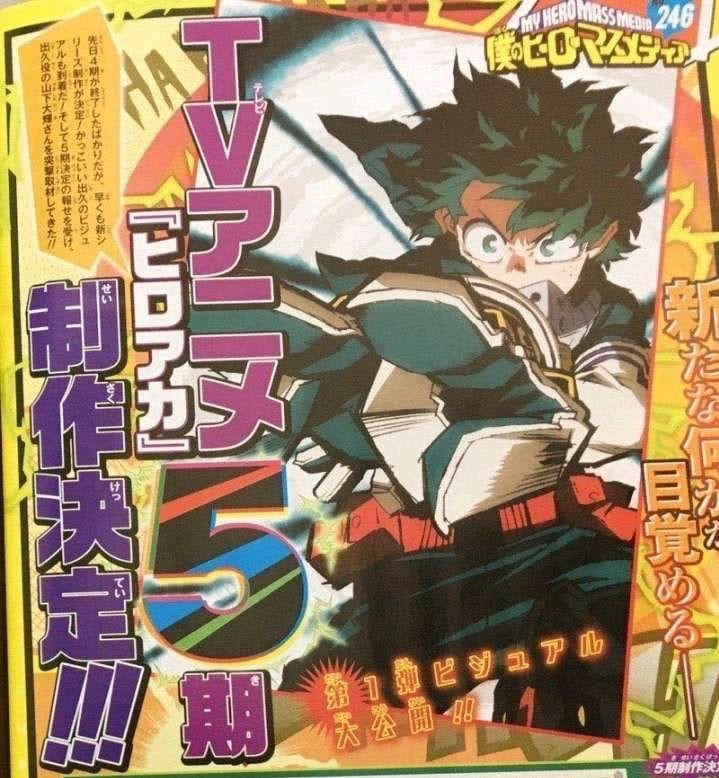 Its good news for fans of the blockbuster My Hero Academia franchise as a fifth season of the anime is in the making. However, an official date of release has not been confirmed yet.

Thanks to the leak from Weekly Shonen Jump’s 19th issue, audiences are now aware that the anime featuring heroes with quirks will be back for a fifth season. It was revealed last week that Boku No Hero Academia will share a big news in the upcoming issue of Weekly Shonen Jump and fans have been anticipating the annoucement of season 5 since then.

More details about My Hero Academia Season 5 are expected to be revealed after the last episode of Season 4 finishes airing this week.

Season 5 of Boku no Hero Academia will probably pick off from the end of Pro-Heroes arc, which the anime began adapting in the second-last episode of Season 4 and then continue to adapt the “Joint Training Arc” which stretches from chapters 194-197 of the My Hero Academia Manga.

It is the sixth arc in the Rise of Villains Saga and will have the young heroes from Class 1-A and 1-B competing against each other in a joint training session. The arc also features one of the fan favourites Hitoshi Shinsho who is aiming to get into the Hero course and is currently being mentored by Aizawa Shoto. As the arc progresses Izuku also discovers a secret about his quirk “One for All” which none of the previous eight users had known about. This part alone has us pumped for the arrival of My Hero Academia Season 5.

The season would also lay significant groundwork for the Meta Liberatin army arc, with chances of the title possibly shifting to My Villain Academia.

My Hero Academia fans have gone through a lot in the four seasons of the series, especially in season 4 which had a particularly dark undertone throughout. However, the times are only set to get more gruelling as My Hero Academia prepares to adapt some of the best arcs from the manga, especially the Meta Liberation Army arc.

While there has been no confirmed release date for Boku No Hero Academia Season 5, it is possible that more information will be available after the last episode of season 4 airs this week. With the ongoing Coronavirus pandemic, it is possible that the series could be pushed well into the summer or fall of 2021. However, the series does have a huge fanbase and while waiting for an year would be a problem from most of them, the fanbase is something My hero Academia could fall back on.

Season 4 of MHA started airing in October 2019, and there are still chances that we could get to see a season 5 this fall, though the possibilities of this happening are very less. Anyways, 2021 seems to be a safe bet as of now for the fifth season’s release date.

Fans were initially concerned about the fifth season of My Hero Academia getting even more delayed as there were rumour circulating that Studio Bones has decided to drop the hit franchise due to excessive backlash from fans. However, those reports have only been rumours till now and there has been no indication from Studio Bones which indicated that they were willing to drop the show.

Dropping My Hero Academia at this would be quite foolish too as the series has managed to amass a huge fanbase worlwide and also has a lot of content to adapt from.

How stoed are you for the new season of My Hero Academia Releasing. Let us know about it in the comments sections. Also check out the list of Spring 2020 Anime which you definitely shouldn’t miss out on here.