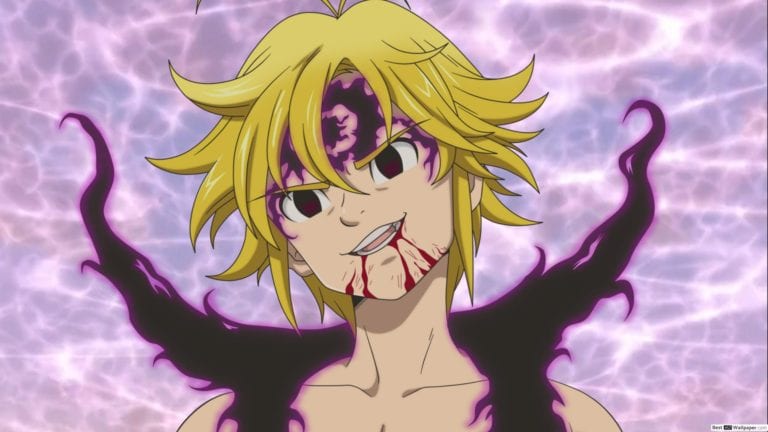 Meliodas’ assault mode has been a craze among the fans of Nanatsu no Taizai ever since it was revealed, first in the manga then in the anime (let’s keep the discussion about the poor animation quality aside for now). However, there is a lot of confusion about this assault mode and when Meliodas is able to achieve it.

In this blog, we are going to explain exactly what Meliodas’ assault mode (also known as annihilation mode) is all about and how it is different from his other demonic forms, especially the berserk mode which we see in Season 1 of the anime.

The following article will contain possible spoilers for Nanatsu No Taizai / Seven Deadly Sins anime season 3 & later chapters of the manga. If you have not caught up with the latest updates from the series, we suggest you refrain from reading this!

What is Meliodas Assault Mode?

Meliodas’ Assault mode is a form which he achieves when he unleashes his demonic powers to the fullest extent. This mode is first revealed when he desperately uses his full power and breaks free from Melascula’s Cocoon of Darkness (Antan no Mayu), an attack which traps their opponent in a pitch black sphere, enveloped in darkness.

Like his other demon modes, Meliodas is shrouded in darkness while in his assault mode. The darkness takes the shape of an unbuttoned thin waistcoat, covering his shoulder, armpits and extends along his torso, exposing his chest. It also has a high collar which spreads wide with jagged ends.

The mark on his forehead is also slightly different from what we see in his previous demon forms as it moves to the centre and looks almost like a complete circle. His legs too are covered in darkness and his feet look like a bird’s talons.

How Does Meliodas Achieve Assault Mode?

However, we can argue that Meliodas was slightly stronger after being revived which gives him an added advantage in his assault mode.

Fans are often confused between Meliodas’ prime and assault mode. Meliodas prime simply refers to the normal Meliodas while he was in charge of the ten commandments in the past.

Meliodas used to achieve the assault mode even during his prime days as the leader of the ten commandments. Back then when he used to transform into assault mode, he was feared by the Gods and the demons equally, as stated by Melascula, who said it was all over when Meliodas transformed and broke free from her cocoon of darkness.

Note that assault mode is also translated as annihilation mode!

Meliodas’ power level in Assault mode is stated to be 142,000 by Gowther, who was observing him fight with Escanor after going out of control.

While in assault mode, Meliodas is easily able to hold off Escanor. It was only when Escanor attained his peak form that he was able to inflict damage on Meliodas and win the fight. However, even after being injured badly, Meliodas is able to recover quickly. He is also able to pin down Zeldris (who was using the demon king’s power) and Estarossa without a fuss, while protecting Elizabeth at the same time.

While in assault mode, his power is set to be greater than those of the four archangels.

If we were to compare power levels of Meliodas it would be as follows:

After absorbing the 10 commandments, Meliodas achieves Godly powers as the Demon King, putting his power levels somewhere in the range of 280,000 – 400,000 (speculation, after assuming that each commandment at least had a power level of 28,000, which was Galand’s level before his magic had manifested) which is way more than the power levels in assault mode.

Meliodas unleashes his demon powers while fighting Helbram too (as seen in Season 1 of Seven Deadly Sins). However, at that point of time, he was not in possession of his complete powers (which was sealed away by Merlin). This mode was much weaker than the assault mode and is known as the Meliodas’ Berserk Mode or Berserker Mode.

Meliodas’s power level in Berserk mode is 10,300, which is much lower than his power levels of Assault mode.

Though both Berserk mode and Assault mode are achieved in the same way ( by unleashing the full demonic powers) the major difference between the two forms is the power levels.

To reach the assault mode, Meliodas needs his complete powers or in layman terms, he needs to be in his normal mode and not his depleted mode (which we see at the start of the series with his power sealed off)