Geto Suguru has been an enigma since Jujutsu Kaisen 0. He was certainly dead by the end of the prequel story, but then we see him alive and well in Jujutsu Kaisen. And he switched sides too.

The Geto Suguru of now has brand-new goals and leads the curses. But he also has a new look, the stitches on his forehead. We all knew something was going on and the Shibuya arc confirmed these suspicions.

Geto was long dead (ouch) and the present timeline’s Geto was merely an imposter. Gojo’s Six Eyes confirmed that this was indeed the case. But who was this weird Brain? Choso gave us an answer.

In chapters 106 and 133, Choso sees a memory of the past that never happened. Something not only set off a false memory in his head but also triggered actual memories of his birth. He came to the realization that he and his brothers were Cursed Womb: Death Paintings. And the creator of these Death Paintings was none other than Noritoshi Kamo.

Thus, when Choso came across Geto in chapter 134, he comes to a sudden conclusion. Choso remembers seeing the man who toyed with his mother having stitches, and Geto had them too. Thus, he connected these dots and called Geto Noritoshi Kamo.

Noritoshi Kamo is referred to as the evilest shaman in the history of shamans. He is also a blot of shame for the Kamo family for his cruel experiments. While everyone was taken aback by this information, it seemed plausible nonetheless. Kamo was a very powerful shaman and hailing from one of the big three families, he was sure to have some influence.

Choso’s detailed memory seems accurate as well. At his accusation, the Brain calmly replies that Choso has noticed (his identity or the stitches?). Without the Brain’s denial or acceptance, everyone was convinced the Brain was Noritoshi Kamo possessing Geto.

Kusakabe’s train of thought in the chapter even gives us some insight into how fearful the real Noritoshi Kamo was.

So, from this point on the Brain was called Noritoshi Kamo. However, if the Brain is, in fact, Kamo, why does the man have stitches on his forehead? This discrepancy leads us to our next question:

Is the Brain really Noritoshi Kamo?

No, the Brain is not actually Noritoshi Kamo. His true identity is a shaman, Kenjaku. The infamous Kamo was the Brain’s victim as well.

If we look closely at the story, we could see a few clues that tell us the Brain was just playing off its identity. First, in chapter 134 itself, we see a validation of this fact:

This major “reveal” of the Brain’s identity left everyone on the battlefield stunned. While some people like Yuji were genuinely confused, some like Kusakabe speculated the truth. The Brain casually replies to everyone present there that Noritoshi Kamo is but one of many names.

In Chapter 145, Tengen finally cleared the mystery surrounding the Brain’s identity. According to them, the brain is actually a 1000-year old shaman, Kenjaku. The Brain’s age was not a big reveal, though. In fact, we have had several clues to decipher that the Brain was quite old.

While using one of his techniques, the Brain recalls a myth/belief from the mid-Edo period. The Brain seems awfully familiar with the Edo period that lasted from 1603 to 1867. For someone 150 years old as Utahime thought, it would have recalled something from that era. If it had to, that is, in the middle of a battle.

Kenjaku has probably possessed a bunch of people throughout history, but as Noritoshi Kamo, his evil deeds made it to light. Had it not been for Choso, a secret of which even the documents were deleted, would have never come up. Thus, even Noritoshi Kamo was merely a tool to the Brain’s goals.

Another piece of evidence that adds to this fact is chapter 143. In Yuji’s childhood memory, we see that even his mother had the same stitches as Noritoshi Kamo. So, just like that, Kenjaku has been faking its identity for probably eons now.

The Brain’s farewell to Sukuna was a little suspicious. While leaving, he asks Sukuna to remember “the world of Heian” when shamans were vicious. We know that Sukuna was a “natural calamity” even when he was a human shaman in ancient times. Once again, this conversation means that Kenjaku is familiar with this period as well as Sukuna’s powers.

Tengen’s confirmation that Kenjaku is 1000 years old confirms that he does know Sukuna. What does he want from Sukuna by invoking him? We will probably come to know that in future chapters.

To answer in short; the Brain is not Noritoshi Kamo, but Kenjaku. He is a 1000-year old shaman, according to Tengen. He has possessed different people throughout history. As Noritoshi Kamo, his evil deeds came to light. Moreover, he also possessed Itadori’s mother, as seen in his memories. Currently, he is possessing Geto to fulfill his goals of evolution by starting the culling game. Kenjaku is also familiar with Sukuna and his powers.

What do you think of this reveal? We still have doubts of how Kenjaku survived and possesed people all this time. We hope to get answers from the story soon! Let us know your thoughts about Kenjaku below! 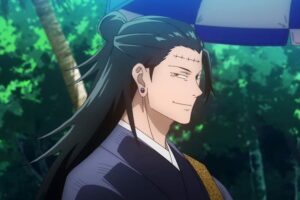