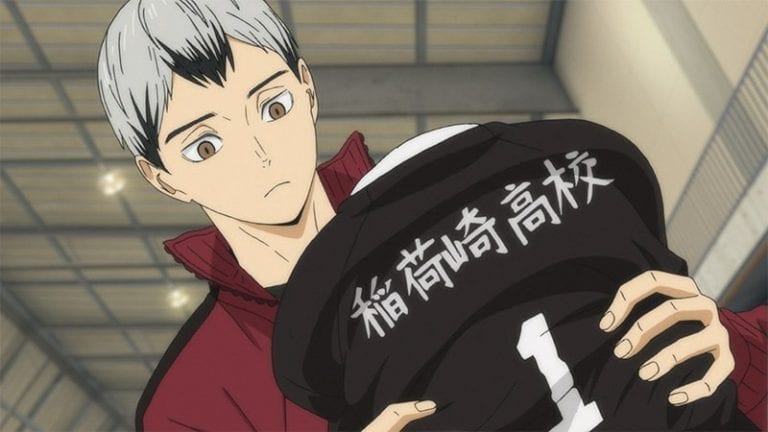 The hype for Haikyuu is still rising to the top! Karasuno vs the ultimate challengers Inarizaki High has rolled over to the second set with the latter team in the lead. Is Karasuno in trouble? Let’s find out!

And here, Inarizaki has summoned their #1 Captain Kita Shinsuke. Though they have the second set under control with a point gap double than Karasuno, yet Inarizaki’s coach wanted to make sure the tables don’t get turned. Thus came in the “eyes of Inarizaki”, Kita kun.

Though he is not a regular, even so he is always watching over his teammates and never spares a chance to lecture them whenever they are slacking like an yokai “okuriinu”– the dog which follows a traveller at night just waiting to pounce when he lets his guard down and trips.

And lo behold, the second set goes to the fox gods with a 8 point lead.

The third set is still going to be the major Atsumu vs Nishinoya battle of serves and saves.The push from Captain Shinsuke is going to work a charm on Atsumu for a while, and Nishinoya is still figuring out how to counter it.

Asashi did a good job lifting up his soul with his inferiority complex and scoring the first point in set 3, such a touching moment for Karasuno.

However,desperate times calls for desperate measures thus Coach Ukai changed the rotation with Karasuno’s strongest blockers to counter the Inarizaki attackers who were in the front line. Nice call coach!

But will that be enough to slow down Rintaro and Aran?

The artwork was consistent, no complaints about that. The comedy scenes were a lot less which is not a problem if you bring in a new character to make up the engaging environment.