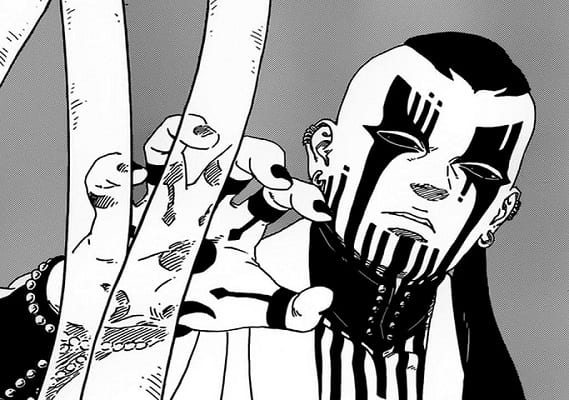 Jigen established himself as the strongest after defeating Naruto and Sasuke. However, he didn’t manage to kill either of them! While Sasuke managed to escape after being severely injured, Naruto wasn’t as fortunate, as Jigen sealed him away. So, you might think, how and why did Jigen seal Naruto if he could just kill him once and for all! Well, read this article to find out!

Contents hide
How did Jigen seal Naruto?
So, Why Did Jigen Seal Naruto?
1) Jigen does not have any business with Naruto:
2) Killing Naruto will take a lot of time:
3) Jigen’s condition:
TL;DR

How did Jigen seal Naruto?

Jigen sealed Naruto inside a strange-looking object after defeating him and Sasuke. All of this started when Jigen paid Kawaki a visit in chapter 36 of the Boruto manga.

While he came to pick up Kawaki and return to his base peacefully, it obviously wouldn’t be that easy. Naruto attacked Jigen to prevent Kawaki’s return to Kara’s base. As the fight started to escalate, Jigen transferred himself and Naruto to another dimension. Knowing that Naruto cannot use Space-Time Ninjutsu, Jigen planned to leave the Hokage behind forever.
Even though this was a clever strategy, Sasuke managed to save the day by teleporting himself into the same dimension, preventing Isshiki from leaving. Since both Naruto and Sasuke were here, there was no point in leaving, as they’d simply come back too! Hence, what ensued was a memorable clash between titans.

Naruto and Sasuke were able to stay afloat against Jigen even though he had some pesky abilities and tricks up his sleeve! However, things went south as soon as Jigen decided that he’s had enough. Jigen activated his Karma Seal’s powers as he found himself pushed into a corner. This time, the duo was no match against Jigen’s true powers. While they couldn’t cause enough damage to him directly, the consequences of using Isshiki’s overwhelming power caused the vessel (Jigen) to break.

As the fight neared its end, Sasuke and Naruto found themselves stabbed with multiple chakra rods, unable to move.
Before leaving, Jigen summoned a huge object, with two circular parts. Imagine something in the lines of a utensil with a lid. He said then revealed that he plans to seal Naruto and kill Sasuke.

Next, Jigen ran towards Sasuke to end him, but Naruto uses the last of his strength to summon a few shadow clones! The shadow clones somehow bought enough time for Sasuke to teleport himself back to the shinobi world, leaving Naruto alone. While Sasuke didn’t want to leave Naruto, he had no choice.

When Jigen was just about to seal Naruto, the Hokage tried to provoke him. However. Kurama stopped Naruto from provoking Jigen just before the Otsutsuki could become angry, as being sealed seemed better than being killed. Then, Jigen proceeded to seal Naruto after calling Kurama the smarter one out of two. After sealing the Hokage, Jigen reduced the size of the sealing object and went back to his base, abandoning Naruto in the dimension.

You must be wondering that if Jigen was strong enough to kill both Naruto and Sasuke, then why didn’t he just kill both of them, or at least Naruto?

So, Why Did Jigen Seal Naruto?

The answer is quite simple; he just couldn’t kill Naruto. Yes, Naruto is a mortal but there are quite a few reasons as to why Jigen didn’t end Naruto’s life. Let’s dig into them now!

1) Jigen does not have any business with Naruto:

It’s just as Jigen said in chapter 36 of the manga, Jigen has no business with Naruto whatsoever. His existence is of no importance to him. So killing him would only be a waste of time for him since he’s way more interested in Boruto and Kawaki; as they have Karma Seals.

Naruto was of utmost importance for Momoshiki, the previous Otsutsuki invader since he was unaware of a Karma vessel’s existence. And, this clearly isn’t the case with Isshiki (Jigen). Hence, he doesn’t have to go through the work of defeating Naruto, extracting all the Nine Tailed Beasts and then obtaining the chakra fruit. Instead, he just has to go pick up a kid (Boruto) and drop him into the Ten-Tails’ mouth.

2) Killing Naruto will take a lot of time:

This is because Naruto and Kurama are naturally gifted. Naruto, being an Uzumaki has a massive life force, and Kurama is the strongest of all the Nine-Tailed Beasts. It took quite a while for Momoshiki to extract even half of Naruto’s powers, so killing him is definitely going to be time-consuming.

Jigen doesn’t want to waste so much time since Naruto is insignificant to his end goal; he’d rather spend that time kidnapping Kawaki and Boruto.

Jigen was in terrible shape himself due to the duo’s relentless attacks combined with the repercussions of using Isshiki’s overwhelming power. This damage can be seen physically, as there were cracks in Jigen’s belly section, and Jigen’s body also shed a tear. This is because of the vessel’s incompatibility with Isshiki and his powers. In fact, Jigen’s chakra level almost dropped to zero! He needed constant healing for 2 days straight to return back to normal. He couldn’t even kidnap Boruto and Kawaki due to the damage, even though this was his golden chance!

Hence, he couldn’t risk wasting his time trying to kill Naruto; since he didn’t know how long he could last himself and Naruto would certainly try to fight back in any way possible out of desperation.

Jigen’s visit to Konoha led to a fight between him and Naruto. In order to avoid fighting the Seventh Hokage, Jigen teleported him and the Hokage to one of his dimensions and planned to leave Naruto in the dimension knowing that he can’t use space-time ninjutsu! However, Sasuke managed to save his friend! He pinpointed Naruto and Jigen’s location and teleported himself to the same dimension, preventing Jigen from escaping as well!

This ensued in a fight between the three, as Naruto and Sasuke teamed up against Jigen to put an end to Kara’s plans. However, the two didn’t expect Jigen to be so strong. He was able to keep up with the two of them and also hit back hard. Nonetheless, it seemed plausible for the two to win by an inch. However, Jigen finally used his Karma’s true powers, overpowering the duo with ease.

Then, he stated that he would kill Sasuke right there and seal Naruto. He wanted to seal Naruto since killing him would take too much time, and he isn’t of much importance to him. Moreover, he was at his limit too! While Sasuke did manage to escape, Naruto wasn’t as fortunate. Jigen sealed the Hokage and left him in the dimension itself.

So, now that you know how and why Jigen sealed Naruto, what are your opinions? Should Jigen have killed Naruto instead since it was always a possibility that this could bite him back? Or are you glad that Naruto wasn’t killed? Let us know in the comments below!