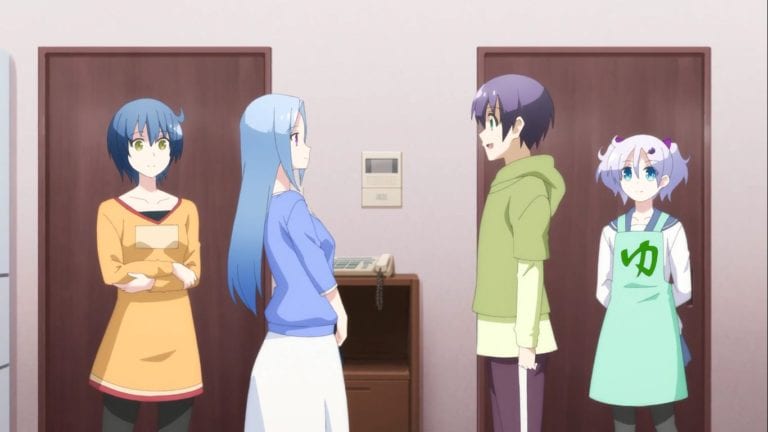 Continuing from the previous episode, Tonikaku Kawaii has brought Episode 9 a disastrous entry! B-But, d-did we just stumble upon the funniest episode of the series?? Did Nasa and Tsukasa chan’s misfortune turn into the best opportunity to get one step closer to each other? Let’s find out!

So, Nasa’s apartment and the whole building has burnt to ashes. No casualties. When our Kawaii couple returns, they are left with nothing but their token of marriage- the potted plant from the registry office.

It was such a sweet moment where Tsukasa finally answers why he loves Nasa so much. It is like all the questions from the previous episode are being answered along with filling the gaps which we don’t yet know about Nasa-kun. He sure is a kind and cautious man, who is ready for any emergency. The ideal husband Yuzaki Nasa!

But man oh man! Even if the episode started with some glum faces, the moment Kaname enters the senpai roles are reversed! And the rollercoaster of laughs just kicks off!

With the apartment gone, Nasa is going to take full advantage of her wife’s inconvenience(of course he is a man after all). However, his first lewd idea for staying at a love-hotel was crushed by Kaname’s sneak attack. Seriously, even when Nasa’s dagger becomes a sword Kaname’s reaction is like she is so used to it. It’s hilarious!

Next up, we have Aya Arisugawa, Kaname’s elder sister with a huge crush on our boy, who still couldn’t figure out about Nasa’s marriage after a truckload of hints. Neither the ring nor the information about Tsukasa being introduced to his parents was obvious enough for her to read between the lines eh? I feel you Kaname-chan.

Still on the subject we meet Aya and Kaname’s momma! Well she is one hysterically insensitive character i see. The scene where Mrs. Arisugawa just comes in and drops the bomb on Aya- “the two of them are married…” Without giving much breath she drops another one in front of Nasa, how Aya had a crush on him! Rofl! This momma turned out to be much more denser than Aya-nee! Given the circumstances any girl will want to disappear at that moment. Gosh!

This new character just absolutely levelled up the comedy in the series. Never backing down, the scene ends with badass Momma cutting through Aya’s backstory of her first love and her failed marriage story into a turmoil of mother-daughter sad backstory story war! I can’t even…pfft.

Oh yeah, i support Aya-pi, a game-streaming Youtuber. Though, I get why the others had doubts…

We are now approaching the climax of “Project Underwear”. Tsukasa-chan is commando inside her tracksuit yet don’t get your hopes up for its “tonikaku kawaii”!! Kyaa~

Our Kaname-senpai is the ultimate marriage counselor. She has more wisdom than Nasa and thanks to her, we get to see Tsukasa in more cute clothes! Oh, did i say Nasa is hella possessive about her girl? Sasuga husband-kun.

But, you know, as the proverb goes, new underwear is better than wet underwear. So, we finally enter the “Lingerie Arc” and Nasa-kun is making the same face as all husbands do when they get surrounded by loads of bras and panties. They want it when they can’t get it, then walks away when you give them the world.Men will be men. Yare yare.