How Many Kagune Does Kaneki Have? Before answering the question, let’s first understand what is Kanenki’s Kagune:

Ken Kaneki became a half ghoul after Rize Kamishiro’s Kakuhou was transferred into him post her death in the steel beam incident. This gave him a rinkaku kagune along with increased healing prowess and physical strength.

The manifestation of his tentacles can also be related to the mental torture he went through in those situations (consider the torture in the battle against Yamori and during the raid on Kanou’s lab).

However, there are times when Kaneki’s kagune took different forms and shapes. This undoubtedly raises a question in the minds of fans.

How many Kagune does kaneki have?

TL;DR: Kaneki only has the Rinaku type kagune till he becomes the dragon. However his control over his kagune is so high that he can imitate the Bikaku, Okaku and Koukaku types. His Rc-cells still continue to be of Rinkaku type.

Now discussing this in detail;

The question of multiple kagune arises because throughout the series, especially since his encounter with Jason, Kaneki has resorted to constant cannibalism. After consuming kakuhous of various ghouls with different Rc Cell types, it was assumed that Kaneki would possess multiple kagune types. This was further accentuated when Kaneki’s kakuja took the shape of a centipede, making fans wrongly believe that it was due to the fact that he consumed Jason’s kakuhou.

However, that’s not the case. In case of cannibalism, when a ghoul consumes a kakuhou of another ghoul, they absorb the RC cells of the cannibalized ghoul, thus increasing its concentration in their body. It does not add an additional kakuhou to the ghoul’s body.

Now the kagune type depends on the location of the kakuhou and the bond and structure that Rc cells in a ghouls body make with each other. So theoretically it is not possible for him to possess multiple kagune by cannibalism alone.

However, this constant cannibalism caused a mutation of RC cells in Kaneki’s body and transformed his kagune into a kakuja. Now this Kakuja too is just a transformed and mutated state of his rinkaku kagune. This modified kagune usually clads up the ghouls body and certain parts of the ghouls body (half kakujas) and amplifies their abilities.

Kaneki could not initially control the shape and abilities of his kakuja, often falling into a mindless state after transforming and going berserk (as seen during his battle against Shinohara and Amon). However, he was able to wield it more efficiently during Tokyo Ghoul:Re, especially around the parts where he battled Eto Yoshimura and during his last fight with Kishou Arima.

As he gained more control over this modified Kagune, Kaneki was able to make it mimic the Bikaku, Okaku and Koukaku kagune types. For instance, in the fight against Eto in the Rose arc Kaneki was able to modify his kagune, getting his first red hand (like a koukaku type). In Arima’s last fight, Kaneki uses his kagune as makeshift hands and legs which aids him greatly in the fight and also helps him regenerate quickly.

It is revealed in Tokyo ghoul that the shape of Kagune can change based on one’s imagination (an attribute of a ghoul’s intellect). Thus it can be inferred that the different shapes of kagune that we saw Kaneki manifesting was because

Thus in the end, he only had one type of Kagune, the rinkaku type and that’s it. However, there are some unanswered questions regarding Kaneki’s body post the dragon arc. That is the reason we mentioned before that Kaneki has only one Kagune till the Dragon arc.

Does Kaneki have 4 Rc types post the Dragon arc:

The best answer we can give is, “it’s debatable”. The kagune that we see him manifest is totally different after he is extracted from the dragon. While this can be attributed to the greater concentration of Rc Cells and even better control of his abilities, we need to consider the fact that his body did seem to have some unidentified organs after he was extracted from the dragon by Touka.

Without knowing what these unknown organs were, we can only assume so much. So there is a real possibility that Kaneki might have had all four Rc Types (as he was now complete as Furuta says) post the dragon arc. He also displays totally different Kagune in his fight against Furuta in the end, which adds more weight to the theory.

Do you agree with our reasoning. You can start a discussion about this topic in the forums sections and get other anime fans involved in it too!! 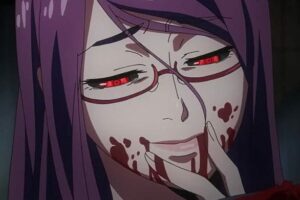 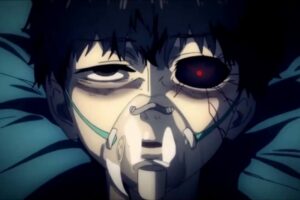