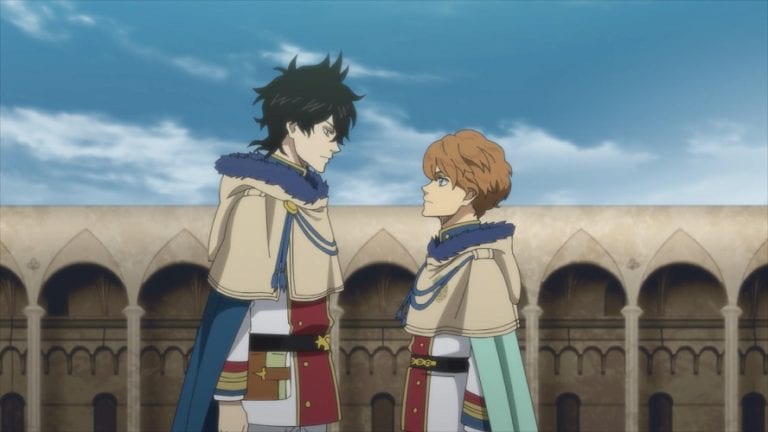 Ever since the Eye of the Midnight Sun attack on the Clover Kingdom happened, Langris had been stalling resuming his duties as the Vice-Captain of Golden Dawn. And it was a given that Yuno’s promotion to 1st Class Senior Magic Knight will stir up rumors in the squad. Langris was the first one to “lose control” of his elven magic in his Royal Knights’ duel against Finral. Black Clover Episode 154 opens with a few members of Golden Dawn discussing Yuno being the Vice-Captain and suddenly encountering Langris. The latter did not look happy at all with this talk going around, even though he was silent. His actions spoke much, much louder than his words though.

William asked Langris to resume his duties as the Vice-Captain as a great danger is approaching. However, Langris politely asked for a bit more time. The hesitation in his voice was as clear as day. William looked like he understood what the boy was thinking but kept mum. Langris then visited Finnes (his ex-fiancee, who loves Finral). Finnes tells him how Finral delivers her a bunch of letters but does not meet her. He considers this as part of his “training” to be the one who makes Finnes happy. They exchange an awkward conversation after she compares Langris and Finral in how bad they’re at keeping secrets. Langris takes his leave, after being probed by Finnes (although innocently) about his duties as Vice-Captain. He doesn’t say voice it but this is probably when he decided to quit Golden Dawn.

A Duel and Two Promises

Much to the surprise & shock of the relaxing squad members, Langris challenged Yuno to a duel. He says he is not trying to start a fight but just to test him. However, their membership of Golden Dawn shall be at stake: the loser has to quit the squad! The members tell Langris and Yuno to calm down, but their minds had been set. William is informed of this heated challenge and he rushes to the site. It looked like he would stop the fight but he let them be.

The duo begins sparring, and Yuno dodges the first two attacks from Langris. Yuno lands a small cut on Langris, to which the latter smiles begrudgingly. However, Yuno tells Langris to stop holding back, as he could have easily dodged that cut. At first, it seems like Yuno was provoking the other. But he was trying to make Langris realize that he has more than enough potential to discover – since he has traces of mana left from when he turned into an elf.

Langris gets annoyed at this and uses the spatial magic attack he used in the Royal Knights’ exam while Yuno gets into Spirit Dive. Langris also activates his automatic spatial defense, rendering Yuno’s attack useless. He follows Yuno’s flight, continuously attacking him and concentrating all attacks at one point.

It was over for Yuno. Or was it?! The “Yuno” Langris had been aiming for was an afterimage! The person really defeated was Langris as Yuno stood holding a sword to his neck from behind!

Langris accepted his defeat and asked Yuno to laugh If he wants. Yuno tells him that he doesn’t feel he won because Langris was trying to lose on purpose. He had seen through the other. Yuno then asked Langris to promise a duel again someday where none of them would hold back. Langris stares in surprise and disbelief at Yuno, since on the contrary of making fun of him, Yuno still respected him enough to make that promise.

He then approaches William. He apologizes for his actions without the Captain’s consultancy. The latter, however, realized Langris’s state of mind already and understood what he needed to do. He also tells him that he’s still a member of Golden Dawn.

To some, Langris’s behavior might seem weird and erratic. But it is very much understandable. He has been pushed down from a high pedestal view of himself to being considered a person with merely a corrupted mind. He probably needs time to rebuild his view, refurbish his willingness, and realize his potential again. Psst, manga readers! The promise Yuno asked Langris to make is a foreshadow of an event we saw recently!

Before going, Langris met Finnes. Finral also popped up to meet her before leaving and Langris warned him that he hasn’t given up on Finnes yet. With Langris gone as of now, Yuno is the Vice-Captain of Golden Dawn. He just got one step closer to being the Wizard King. Congratulations, our boy, Yuno!

Cameo of the Black Bulls

Well. It isn’t a Black Clover episode without the Black Bulls, is it? The episode shows the members preparing to leave for the Heart Kingdom. Magna’s request to join the training has also been approved! Gordon also leaves to train under his father. Charmy is very much enticed by the Black Bulls’ conversation of a special juice of the Heart Kingdom, so who knows, she might sneak in too! I would love to see Charmy power up to her wolf magic form again!!

A very good episode in terms of story-telling. The pacing was good too. I really enjoyed the way the anime is sending across the redemption of Langris. It’s giving his character more depth and making it enjoyable to see him on screen, especially because you feel the emotions the makers want to portray. The duel between Yuno and Langris was short but exciting as well. Episode 154 was a great transition from fillers to the training arc in the Heart Kingdom. Can’t wait to meet the five Spirit Guardians in the next episode! I am pretty happy they are starting with the next arc before this year is over!!

Have any thoughts I missed? Let me know in the comments below!