Why Mikasa Killed Eren: Understanding the Bold Step In Attack On Titan

From a 4 day old to a 2000 year one, when Mikasa killed Eren, it ended two bloody conflicts that brought suffering in their own special ways. 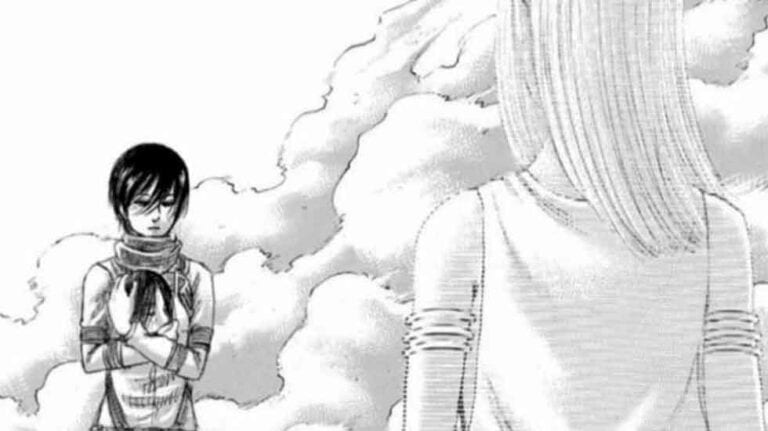 Hi, did you read the manga?

Its understandable if you didn’t understand the intentions behind Mikasa killing Eren (not really). With Attack on Titan escalating in its final two chapters, we thought it couldn’t get more complex.

That is, until the extra panels for 139 dropped. All of a sudden, we saw parallels that we couldn’t before.

Attack on Titan is just another phrase for painful surprises.

That being said, it only makes sense for Mikasa to kill Eren right? How else could Isayama give us one last heart attack if it was any other way?

To Stop The Rumbling

The four year time skip in the story changed quite a few things. Most notably, a shift in Eren’s behaviour. Over the span of a few chapters, it becomes obvious that there is a wall between him and the others.

As the story progresses it gets obvious that at the climax Eren would be standing without the support of his comrades.

It really does tug at your heartstrings when you look back at the previous arcs that solidified their love and dedication for not only their shared goal but for each other.

Unfortunately for Armin, there was no room to talk and make things better. To understand why Mikasa killed Eren, let’s look at his character’s progression.

Firstly, Eren managed to go rogue when the Survey Corps landed in Liberio. Eren walked out of the convention the group was attending once the meeting’s stance proved futile.

The others did not see him again for at least the next two months. During this time, he infiltrated the military and ends up meeting Zeke upon Yelena’s encouragement.

To make things worse, Eren’s intention of getting to the enemy were the exact opposite of Hange’s cautious approach. This desire of wanting to attack the enemy from within, a sick play on how Reiner did the same to Eren years ago solidifies when Eren attacks Liberio to declare war in his own way.

After all, actions speak louder than words (Willy Tybur, this one’s for you.)

Mikasa confronted him, reminding him that he trampled over innocent young children to get revenge. This shift into a violent and independent approach signals sirens for the remaining characters.

If the communication gap between Eren and the Corps couldn’t widen, then it does when they arrive on Paradis. Now locked up, Eren refuses to talk about the motives behind his actions and what he plans to do.

With the rise of the Yeagerists who created public resentment against the military, Paradis was involved in a bloody civil brawl. Eren has a proper conversation with childhood friends Armin and Mikasa one last time.

This is the last time we see the three talking to each other in the current events.

Fast forward to the last few chapters of the story and Eren’s fatal end seemed inevitable. With the rumbling in tow, its later revealed that Eren managed to kill off 80% of the world population.

Eren frighteningly resembles Macbeth, who said “I am in blood stepp’d in so far, should i wade no more, returning were as tedious as go o’er.” Eren had reached a point where finishing off what he started was easier than going back and fixing anything.

Therefore, to kill him was the only way to stop him. When he summoned the Alliance to the Paths, Eren said the same. With Mikasa being the strongest of them all, it made sense that she was the one who freed the world, and Eren, from suffering.

Symbolically, Mikasa killing Eren obviously has a lot of weight. To see Mikasa, who had risked her life multiple times to save Eren in the past, kill him was heart wrenching. It was a tragic ending to a tragic love story.

Despite so, we also know that Eren wouldn’t dare leave Mikasa with his hateful last words. Implanting a “dream sequence” in her brain, Eren encourages her to forget about him and live on when everything is over.

This makes Mikasa understand something. She figures out that it had to be her, who brought Eren Jeager’s downfall.

And with this, she freed a girl so similar to herself, yet so different.

One aspect of the story that is sometimes looked over is that the truth isn’t known to Paradis and perhaps the rest of the world. Barring the main ensemble, Eren’s true intentions and Ymir’s ordeal remain in the dark.

It hurts to know how the conflict could’ve been sorted out much quicker than the grim ending we see in chapter 139.5.

Ymir’s story finally unraveled in front of us. She too, was waiting to be freed. However, her situation was one where she got trapped due to her complex relationship with Karl Fritz.

Funnily enough, it was not hatred of the world that made her “choose” Eren to carry out the rumbling. Love burdened her. Love has been a big yet invisible theme in the story, so seeing it make a bold return at the end was something that Isayama sensei deserves praise for.

According to Eren, Ymir had been in love with Karl Fritz all along. It is plausible that she developed Stockholm Syndrome after Fritz took her in as his concubine and exploited her.

In reality, Ymir was waiting to see if another woman, burdened by love, would be able to put her feelings aside and bring the fall of her lover.

With the release of chapter 139.5 it becomes clearer why Ymir had pinned her hopes on Mikasa; Ymir too had killed Fritz rather than letting him live. Mikasa did exactly that with Eren, giving Ymir the emotional stability she had been craving for millennia to break free.

Ymir learnt that the shackles of love can be broken.

However, her freedom needed the sacrifice of a nineteen year old boy who was fighting a war that he didn’t have a clue about. Till this date, our hearts ache for Eren. His and Armin’s final conversation is a testament to the fact that Eren was the most important factor in Ymir’s journey to freedom, but not the chosen one.

Therefore, call it fate or Ymir’s luck, Mikasa killing Eren was so much more than a World War-esque conflict drawing to a close.

Mikasa killing Eren had two dimensions to it; synonymous with how there are two parallels running in the story. To many, the events were just an eruption that had been bubbling for a century.

But to the few who knew, it was the last leg of a two thousand year old tragedy.

In short, Mikasa killed Eren so not only could the rumbling stop, but the Power of the Titans could come to an end. Which, would only happen when Ymir embraces herself and sets herself free.

With Ymir doing the same, the titan powers finally vanished from Earth.

While killing Eren and bringing an end to this conflict only garnered temporary peace, the Alliance managed to save the world from extinction. Attack on Titan’s beauty lies in its realistic mockery of sacrifices, as the end shows us that conflict can never really end.

What do you think about Mikasa killing Eren? Do you think Eren should have won? Let us know in the comments below!

7 thoughts on “Why Mikasa Killed Eren: Understanding the Bold Step In Attack On Titan”