Skip to content
Home » Series » Re:Zero » Re:Zero: Is Elsa Granhiert Really Dead? How Did She Die? 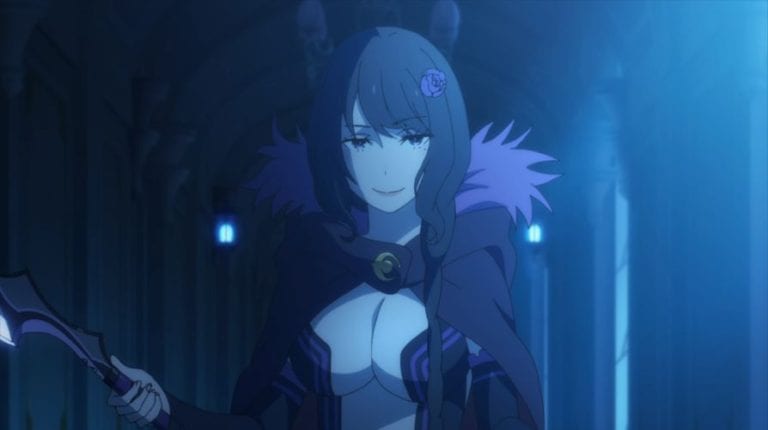 As the situation currently stands, Elsa Granhiert’s body has been completely crushed by Garfiel Tinsel. Everyone has therefore assumed that she is dead for the good now. However, this is not the first time that she died. In the past, she has recovered even after dying. This makes me question, is Elsa really dead? How did she really die? I ask the latter part because there is some cut content in the anime which explains what really happened to her!

In a previous article, we talked about the powers of Elsa Granhiert. We deduced the cause behind the so-called Immortality of Elsa which enabled her to even return back from near-death situations. What if Elsa is resurrected by the Curse that is craved within her body? I shall be discussing the answer to this topic in this article

Before getting to the clash between Elsa and Garfiel, I would like to redirect your attention to volume 12 of Re: Zero, where her death was shown to the audience for the first time.

The confrontation takes place in Chapter 3: A Four-Hundred-Year-Old Cry, where Subaru is running away from Elsa and dragging Beatrice with him. The scene starts with Meili crossing their paths to stall them till Elsa catches up. As soon as Elsa enters the scene, she tries to kill Beatrice but is repulsed by the dark magic Beatrice employed.

Beatrice describes the magic as Minya – mana arrows of stagnant time. It is the same magic Subaru employs with the help of Beatrice to fend off The Great Rabbits in Sanctuary much later.

Coming back to the standoff, Beatrice fires her mana arrows at Elsa who is adept at deflecting them with her blades at first but slowly starts taking damage as the arrows chip and shatter her blades and then impaled her body, thus shattering it. The full description of the scene in the LN is given below –

Beatrice showed no futile compassion, such as asking to hear her final words. She thrust an arm toward Elsa, clenching her open hand.

That was all it took for countless arrows in the sky to converge upon Elsa, impaling the entirety of her body.

Repeated destructive impacts caused a cloud of dust to rise from the street. When the dust settled, what remained was a remorseless and cruel yet somehow overwhelmingly beautiful work of lethal art.

Crystal arrows were thrust through her entire body, half of it shattered like inorganic matter. Such was Elsa’s death.

As we can see, Elsa had clearly died in this scene. Half of her body was completely shattered. The characters in the scene assumed the same but there was no expression of remorse on Meili’s face to this. Elsa should have died then and there, but the curse placed on her body reanimated her again and she woke up from the dead. In the next moment, Elsa impales Beatrice through her chest with her Blades, thus killing the spirit.

In that moment, the author describes Elsa’s condition as her not having a single wound on her body, but the side effects of the damage she had taken had wrecked her clothing, leaving her exposed and half-naked. She had clearly taken all those hits and died, yet the curse had resurrected her shattered body into a perfect one again. Some crazy power, isn’t it?

Elsa’s death in fight against Garfiel

Now we finally get to the standoff between Elsa Granhiert and Garfiel Tinsel. What a tense match it was indeed. Let’s recall it, the final moments of the match especially. Garfiel tore into Elsa’s face and then deflected and killed Rock Pig, a massive heavy beast summoned by Meili.

After that, he picked up the beast and threw it at Elsa. Certain that nothing could save her from her impending death, Elsa just stood there waiting for it. In the blink of an eye, her body was crushed by the beast which resulted in her death. The extract from the book is given below –

The woman, the murderess, the vampire, the Bowel Hunter was completely and utterly crushed by the incredible mass.

Fresh blood splattered, mixing with the demon beast’s bodily fluids. There was no sign of revival—only the aroma of death.

But the question now that troubles me is that Is Elsa Certainly dead? Considering what happened in the fight against Beatrice and Subaru, what gives that she will not be reanimated by the curse again? While the anime may have concluded Elsa’s story is this fight, there is a little more to her story in the LN.

In the Light Novels, Elsa had resurrected due to the curse even after being crushed by the Rock Pig. Yes, she did not die there. Why do we say this? Because the method that should be used to kill Elsa completely is not crushing her body!!

When Subaru was searching for Beatrice in the chapter Pick Me, he encountered a reanimated and zombie-like Elsa, who showed no signs of life now. She was nothing but a dead husk controlled by a curse driven by inexhaustible bloodlust and obsession. It dragged its crushed lower body towards Subaru in an attempt to kill him. While Subaru escaped from her sudden strike, he was far from safe.

The reanimated Elsa chases him through the mansion in order to kill him, she is interrupted by the Giltirau (Guiltylowe).

Subaru took this opportunity to escape to the Archive of Forbidden Books. After dealing with the Demon Beast, the reanimated Elsa follows suit through the hidden chamber. Immediately the whole chamber was engulfed in flames and burned to ashes. The extract from the book is as follows –

Immediately afterward, oxygen flowed into the tunnel, where incomplete combustion had occurred. The moment the heat and the oxygen-rich air came into contact, everything burst into incandescent flames. […]

The merciless tendrils of the bursting flames enveloped the undead. The hellish fire instantly burned its body away.

Having lost its power to heal, the body of the undead, now nothing more than a rotting corpse, was swallowed up and turned to ash.

What remained burned up all at once—destroyed by the roaring inferno.

So, is Elsa really dead?

To conclude it, we can say that Elsa has definitely died. Her body is burned to timbers and there is nothing left of her now. Can the curse placed on her still regenerate her body and reanimate her? To quote Elsa’s own words to Beatrice in the web novel; “If I had burnt to ashes, I would have died.”

Garfiel had already chipped away at Elsa’s so-called immortality slowly over time and delivered a finishing blow to her. However, she reanimated again, this time as a mindless corpse; a side effect which I explained when I wrote about Elsa’s powers. Her soul had already departed from what used to be her body. Then the rotting corpse of Elsa met her doom at her own hands.

Thus, in the end, Elsa really is dead!!

Long live the Queen! The Queen is dead.

The curse cannot regenerate if there is no body to regenerate in the first place. Aside from this, there is no mention of Elsa anywhere in the next arcs. So we can safely assume that Elsa is definitely dead and not coming back anymore.