Boruto: Is Kawaki An Otsutsuki Now? 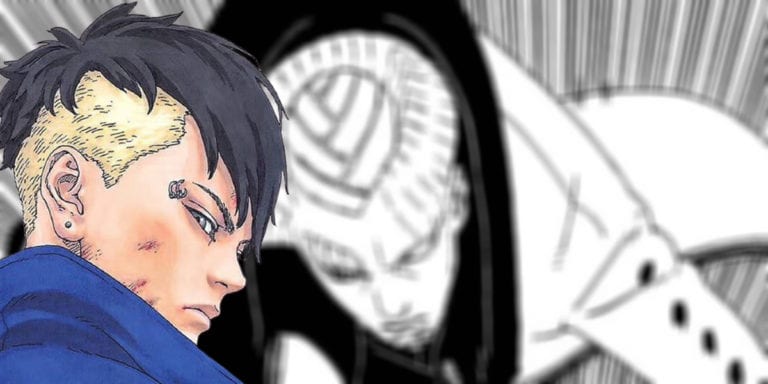 The Boruto: Naruto Next Generations manga introduced us to many intriguing characters. Kawaki is one of the few fleshed-out characters from the basket. In this article, we’ll discuss a rather common question that many fans may have, especially the anime-only ones. So without further ado, let’s get into this!

Contents hide
Who is Kawaki?
Is Kawaki an Otsutsuki?
What does this mean for Kawaki?
Conclusion:

Kawaki is a young boy, almost the same age as Boruto. He had an abusive father, who sold him off to Jigen, the leader of Kara organization for money. Jigen told him that his sufferings were coming to an end. However, this wasn’t the case at all. Kawaki was mentally and physically tortured and made to believe that he’s worthless without a Karma seal.

Is Kawaki an Otsutsuki?

No, but kind of is. In chapter 54, Momoshiki reveals that Isshiki is well and truly dead. But, he did state that while the latter is gone, Kawaki is still 80% Otsutsuki, as 80% of Isshiki’s genes had been transferred into Kawaki already.

Kawaki lost his Karma seal in chapter 50, as Isshiki Otsutsuki resurrected in Jigen’s body. However, Kawaki still wasn’t a free bird. Isshiki was searching for him to implant another Karma seal on Kawaki so that he could resurrect again.

While Naruto and Sasuke had managed to fend off Isshiki for most of his remaining time, Isshiki teleported Kawaki into the dimension using the chakra connection between Naruto and Kawaki’s prosthetic arm.

Kawaki managed to maintain a distance between him and Isshiki, but the dying Otsutsuki decided to use underhanded moves. He threatened that if Kawaki does not submit himself in ten seconds, then He would kill Naruto. Knowing that Kawaki loves and respects Naruto, this was a good move by Isshiki, which worked. As Isshiki approached Kawaki, the boy tried using offensive ninjutsu on him, as a last-ditch effort.

Everybody knows that such a low-level jutsu would not work, right? Hence, Kawaki baited Isshiki into applying the Karma seal on his shadow clone, which actually worked!

What does this mean for Kawaki?

Kawaki will still remain as a subject of sacrifice for Momoshiki. As he said, the fruit obtained by sacrificing Kawaki would not yield great results but it will work. It seems like Kawaki’s bound to the Karma seal by some force, making his life even more gruelling than it already is.

However, there’s another quite likely possibility. Kawaki is shown to have a Karma seal in chapter 1. This implies that Kawaki would be infested by another Karma seal (either my Momoshiki or another Otstusuki).

It would be safe to assume that Momoshiki infests the Karma seal as Boruto can control the Karma seal to an extent; as seen in chapter 54 of the series.

This route makes more sense to me as Boruto’s resistance to the Karma seal has been detrimental to Momoshiki already. He lost his chance to get rid of Naruto and Sasuke.

It is clear that Kawaki is not an Otsutsuki, he was born human, but he is 80% Otsutsuki now, due to him being a vessel of Isshiki. Maybe he could learn how to use his Otsutsuki powers over time through training. If that happens, then you could say that he is an Otsutsuki without the consciousness of one. But, he would still be weaker than a true Otsutsuki.

Does this article answer your question? Do you still think that Kawaki is an Otsutsuki? Do you think that Isshiki will return? What do you think will be the future of Kawaki? Will he become the Ninja world’s human sacrifice? Or will he become Momoshiki’s vessel? Let us know in the comments below! Read more about Boruto: Naruto Next Generations and your other favourite animanga while you’re here!