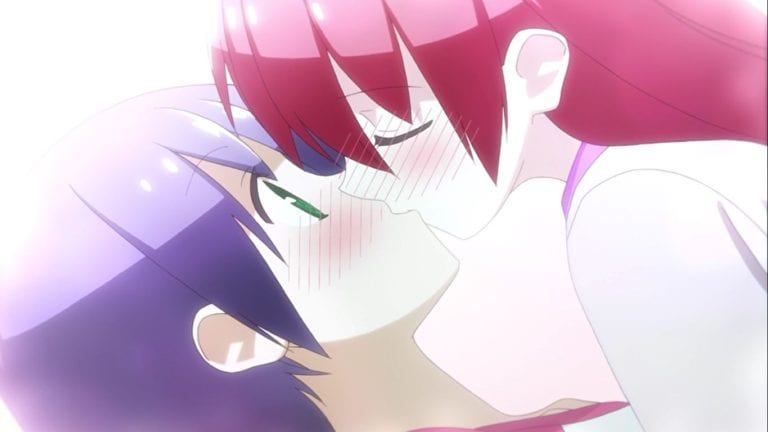 This episode is a special one! Nasa is finally bringing his “cutest girl in the whole universe” to meet his parents. And I knew it was gonna be awesome fun!

At first glance they sure look like some jumpy odd balls too excited to meet their new daughter-in-law yet don’t have a clue how to start. Well, it was bound to happen. You can’t expect your parents to act normal when you marry an underage girl, right?

They start off with their greetings and traditional gift giving session then the older Yuzakis send Nasa away to the bath; it seems like something is up! Tsukasa, being witty enough to read the air, managed the situation like a pro! You go girl ! It was only natural that they were so eager to have some time alone with their daughter-in-law to express their heartfelt gratitude for saving their boy’s life.

The scene showed how much they were grateful to have Nasa as a prodigy while they were just ordinary parents who barely did anything for their child. But, as humbly as possible Tsukasa being the perfect girl, knows just how to win everyone’s hearts! Soon, it seems to strengthen the father and daughter-in-law bond as well!  It is these types of moments that separates “Tonikaku Kawaii” from other rom-coms. Full of real life emotions with hints of curiosity. It surely is a first of its kind.

Let’s keep aside the tears and  now come to the most hilarious part.

Oh my god! Nasa kun is finally sleeping with her wife at the same altitude! Happy tears. And since that is gonna happen, Nasa will of course try some manly stunts to impress her wife. Here comes the Arm pillow! which was an utter failure. Pat pat Nasa kun.

But I am utterly surprised that Nasa is also starting to express his hidden fantasies. Good for us fans though. Hehe. But things didn’t seem to spice up as momma Yuzaki expected huh? We gotta put out our flames of desire by just a “good night kiss”.  *sigh*

Still,as i said before, this episode was special. It gave off a lot of hints about Tsukasa Yuzaki’s maiden life. The half spelt clues here and there will make you curious by the day.

First off, is the scene where she recognizes the area of the Yuzaki household being near Kasuga Grand Shrine. Even if she never came to Nara, yet she knew about the shape of the mountain not changing in a thousand years… isn’t it kinda suspicious?

Secondly, the scene where she was going through the old collections of Nasa’s father and found a “love letter” which was even unknown to Nasa and his father. Hmm…it clearly shows signs that she is hiding something under her playful giggles.

And finally, at the Heijo Palace. How did she know??? Ok, I am convinced she is somehow related to the Kaguya Hime lore!

Overall, a really cozy episode with emotional and curious takes here and there. Comedy scenes were far less except the obvious bedroom one. A lot of traces about Tsukasa chan’s past life will rattle your brain- is she a reincarnation of an old legend? In any case, check out the next episode, I smell something burning! eek!!