Why did Annie ‘The Female Titan’ Cry After Levi Took Eren From Her? 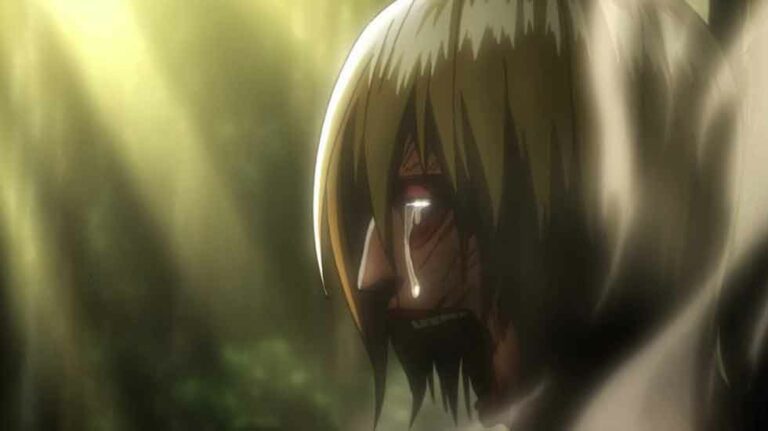 The 57th Expedition Arc in Attack on Titan Season 1 was an enthralling introduction to what we should expect from the story. The highlight of the arc was definitely the Female Titan- Annie Leonhart. However, the aftermath of Levi’s rescue of Eren left everyone shocked. Jaw cut open, up against a tree, the female titan cried.

So, why did Annie, or the female titan, cry?

The answer is quite simple: the 57th Expedition was her shot at getting Eren, a Titan shifter, and finishing the hellish mission on Paradis Island. But, when Levi and Mikasa took Eren from her, Annie realised that the easiest way to return back home to her father in Liberio was gone. This made her cry in her titan form.

Annie, Bertholt, Reiner and Marcel were tasked with the mission of retrieving the Founding Titan from Paradis. However, before entering the human settlement, they had already lost the Jaw Titan to Ymir. If they returned empty-handed to Marley, there would be huge consequences to face due to the mission failing. This would not allow Annie a peaceful reunion with her father.

Annie’s desperation of wanting to return home to her father without consequences, and realising the fact that it is gonna take longer than she wanted after she lost Eren, led to her shedding tears.

But then, why would she want to meet her father who only had selfish intentions while training her to be a warrior?

Mr. Leonhart’s sole goal was to make Annie a warrior so that he could lead a wealthy life. His harsh training only pushed Annie to be apathetic and recluse. She did not find meaning in anything that she did. Annie’s anger towards her father for her relentless training is seen when she cripples him for the rest of his life.

However, before Annie departed for her mission to Paradis, Mr. Leonhart had a change of heart and apologized to Annie. He told her that he saw Annie as his real daughter and asked her to come back safe someday. He assured that he would always be on Annie’s side.

These last words from her father remain a constant source of inspiration and motivation for Annie to fulfill her role. It was the dream of reuniting with her father and living a better life. This made her not give up and continue her mission even further.

Let’s go over a two instances that support this view.

It’s her father’s reassurance of his everlasting support for her that helps her thrash Eren into the building during the climax of their fight in Stohess District.

Annie is saddened over the inevitable truth: she will not be returning home anytime soon. This is why we see her cry as Eren rips apart her titan. Her tears surprised not only the viewers, but also Eren.

Honestly, who wouldn’t cry when they’re failing at what they were supposed to do and all they can remember is their parents’ expectations? (If I accidentally reminded you of that one time you messed your exam, I’m sorry.)

Bertholdt recalls a memory during the Return to Shiganshina Arc, which is of Marco Bodt’s death. Reiner was able to make Annie listen to him by mentioning her father.

Surprisingly, Annie also cries when Marco dies. While it’s more obvious with Reiner and Bertholdt, it’s also evident that Annie becomes somewhat attached to her fellow cadets during her mission to Paradis Island. When Marco said that they didn’t even have a chance to talk this over, it really hits Annie hard.

What are your opinions on the female titan? Do you think she was a mindless monster? Let us know your thoughts in the comments section!