What Is The New World In Overlord?

New world is the name given to the unknown world to which Momonga and the Great Tomb of Nazarick got transported to, under mysterious circumstances. This world shared many traits with YGGDRASIL including the magic and to some extent even the culture and its history 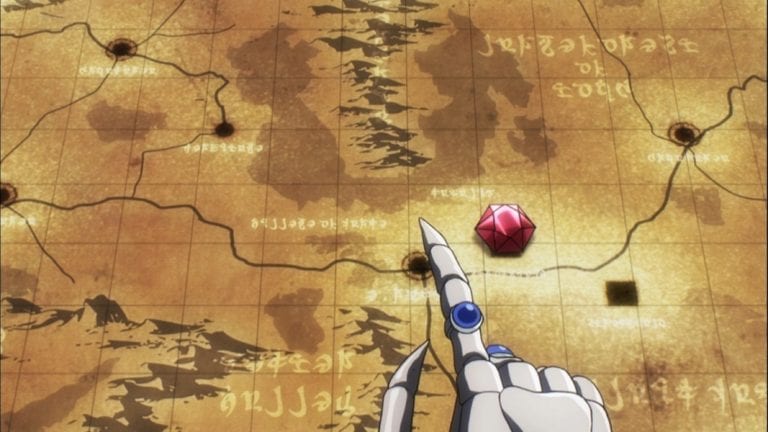 YGGDRASIL was a DMMO-RPG (Dive Massively Multiplayer Online Role-Playing Game) game set in the year of 2126, where pollution and filth corrupted the streets of the real world. This game gave their players a chance to escape from the harsh realities of the cruel world even if for a bit. YGGDRASIL got shut down in the year 2138 after about 12 years of service (which was a lot compared to the other games out there). One such player of this game was Suzuki Satoru (Momonga) who stayed in the game until the very end.

However, the clock went past 00:00 and instead of automatically logging out of YGGDRASIL Momonga was still in the game. He believed it to have been a bug and was unable to contact the admins but it most likely wasn’t (he most likely died in the real world because of loneliness and pollution). Also, all the pleiades and other NPC in the Great Tomb of Nazarick had come to life and were behaving as if they were very real (just like Pinocchio had come alive). To test this theory he sent Sebas to scout the area. On Sebas’ return Momonga came to know that they (along with the Great Tomb of Nazarick) had been transported elsewhere completely devoid of any life form for a good 10km range. 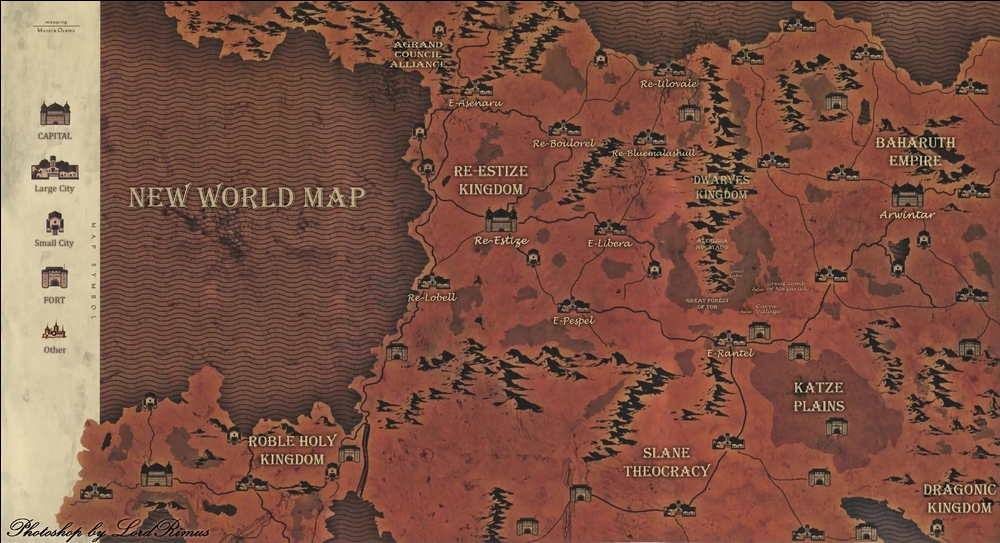 New world is the name given to the unknown world to which Momonga and the Great Tomb of Nazarick got transported to, under mysterious circumstances.  This world shared many traits with YGGDRASIL including the magic and to some extent even the culture and its history. According to theories online, some heroes were people who were transported into the new world from YGGDRASIL in the past.

Momonga calls himself Ainz Ooal Gown in this New world.

After gathering some information, Ainz noted this new world was like continental Europe which had recently come out of the Middle Ages. This was visible in the map he was given by the Village chief in Carne village. Technology was very advanced in some areas of the new world thanks to the magic. Due to these technological advancements, this world had deviated greatly from the World of 2138 Ainz used to inhabit.

Humans, Demi- Humans, Elves, Goblins and other demonoid and heteromorphic races were common in this new world. In addition to it, there was a race of the Dragon. The most powerful dragons found in the New World were called the Dragon Lords. They are considered to be one of the strongest beings in existence alongside Players and their descendants, God-kins.

Different Areas of the New World as compared to their relations with Nazarick: 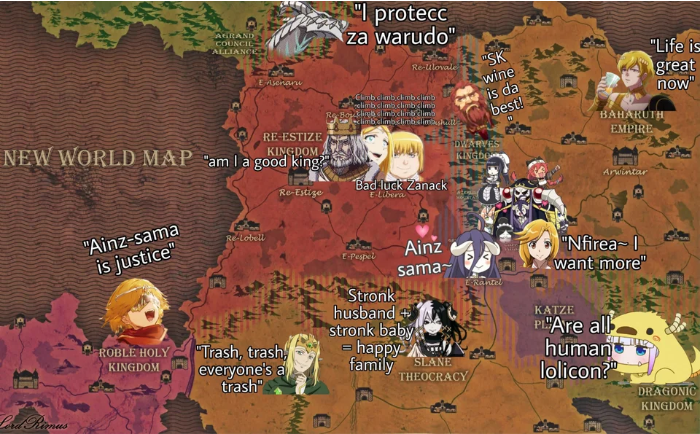 Azerlisia Mountains: A mountain range that runs between the Re-Estize Kingdom and the Baharuth Empire.

Dwarf Kingdom: Founded by one of the Thirteen Heroes, this nation lies within these mountains. (Wine is the best!)

Great Rift: An unfathomable chasm of Absolute Void where even Aura couldn’t look much deep into.

Land of Molten Magma: An underground region beneath the Azerlisia Mountains. There were naturally-formed portals which were close to the [Gate] spell in power, and they joined the magma flows of this region to those of a distant region.

Maze of Death: An underground labyrinth.

Lizardmen Village: Home of the lizardmen located at the southern part of the Great Lake.

Great Forest of Tob: Forest is located at the south of the Great Lake and the Azerlisia Mountains. The southern part of the forest was the territory of Hamsuke.

Forest of Death: A Mass of No life form, located in the northeast of the Tob Forests.

Monument of Ruin: A fortress located in the center of the Tob Forests.

Katze Plains: Plains located south of the Tob Forests. This area acts as the battlefield between the Kingdom and the Empire. Many undead monsters appear due to the lingering grudges of the people killed in battle.

E-Rantel: Fortress city close to the border between the Re-Estize Kingdom and the Baharuth Empire and capital of the Sorcerer Kingdom.

Slane Theocracy: Located south of the Kingdom and the Empire.

Argland Council State: Located northwest of the Re-Estize Kingdom. It is the allied nation of demi-human races.

Abelion Hills: A area of hills that lie between the Slane Theocracy and the Roble Holy Kingdom.

Dragon Kingdom: Located south of the Empire and east of the Theocracy. Kingdom founded by a powerful dragon.

Power Levels In The New World:

Ainz then became an adventurer and went on to E-rantel to collect more information about this new world.

Here he came to know about the sad truth of the power level standards of the different inhabitants in the new world. The power levels were seriously low as compared to the old YGGDRASIL world where it was common for people to be  of Level 100.

For example Gazef Stronoff the strongest warrior of Re-Estize kingdom was much weaker compared to the Death Knights whom Ainz could summon spending next to none of his MP. Fluder Paradyne who was on par with the 13 heroes was weaker than Narberal Gamma, who was one of the weakest among her fellow battle maids (pls nerf). However there are supposedly some Individuals who can certainly give the pleiades (even Lupusregina Beta, who can turn into a werewolf) a run for the money (Don’t worry the pleiades aren’t that strong anyways there are much stronger beings than pleiades in Nazarick) namely Demi Gods and Dragon Lords.

Level 1-40: (Most common) They are basically useless weaklings who weren’t that worthy of remembrance.

Level 41-70: They are worthy enough to be given attention to, even by the NPC’s standards.

Level 71+ : They are worthy enough to be remembered and Ainz would probably use any means necessary to get them to his side (Eg:- Zesshi Zetsumei).

The Magic Of the New and Old World:

The population of the new world is very magically adept. This magic has also helped in the advancement of technology that is seen in various parts of the new world. According to the creator Maruyama, the new world has magic that can produce salt, sugar and spices, as well as spells to restore nutrients to the soils. There were also magic items that could produce light and fuel without electricity.

The following are the classification of magic seen in the new world.

Tier Magic: This is the most common method of ranking and differentiating the spells from one another, even in the new world. The maximum others (Except Ainz and Co.) can achieve is 6th tier which is considered by them to be of God tier and just a meagre tier by Ainz of course. In this world even 0 tier magic exists which wasn’t the case in the YGGDRASIL.

Wild Magic: Also known as the primal magic of the new world this type can only be used by the ones who are of the Dragon Lord’s bloodline, hence making it very rare and also extremely difficult to cast. It is different from Tier magic and is almost impossible for them to be used as one.

Runecraft: One of the medieval form of magic was used by the Dwarves in the past to imbue magic into the items and was then replaced by tier magic as it was more easy and efficient to use as compared to the runes.

Martial Arts: Exclusive to the new world it did not exist in YGGDRASIL hence leading to Ainz being more curious about it, even going to extreme lengths to know about it (Like fighting Clementine or allying with Gazef Stronoff to know more about this fighting type). This also allows the individual to move in certain ways which is humanly impossible. (As even said by Saitama “Martial arts is basically people moving in certain ways to look cool”)

Talent: Restricted to 1 out of 200 individuals eg:- Ninya the talent holder in “Swords of Darness” or Nfirea Bareare the talented pharmacist who then later on married Enri Emmot. It allows the individual to hold certain advantages as compared to the others and depends on the Job class, ability or circumstance of that person, like magic casters can learn certain magic earlier then others or Arche from the group “Foresight” could use the “All seeing eyes” to detect all sorts of magic much like Fluder Paradyne etc.

The currency used by the new world inhabitants was also completely different to the ones used by Ainz in the game. The New World also has some form of automatic translation, allowing people of one nation to communicate with another, despite language differences.

Ainz had come to grow fond of the humans (NPC’s) in the new world even if they didn’t seem real enough. He atleast saw them as “intelligent animals” as compared to the Pleiades and Albedo, who saw them as “insects”. However, to him the new world was still something similar to that of a game. He aimed to find other similar players from YGGDRASIL in the new world, by spreading his name far and wide.

But because of Ainz’s accidental claim of Overtaking the World, Demiurge along with all the other Guardians and pleiades are constantly working towards spreading “The Sorcerer King Ainz Ooal Gown’s” name to the whole world. How much the NPC’s know about the new world and Ainz and how much can Ainz trust them? Let us know your opinions in the comments section!

1 thought on “What Is The New World In Overlord?”