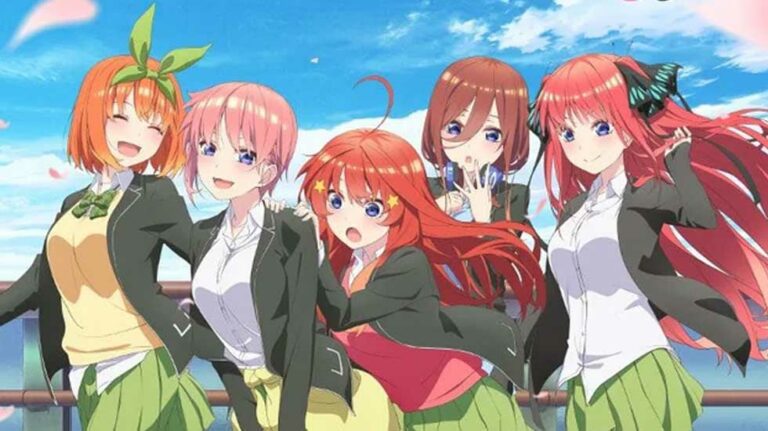 The ongoing “The Quintessential Quintessential Bride Exhibition MEMORIES” held at Ikebukuro Sunshine City Cultural Center Building in Tokyo has revealed five live-sized figures of the quintuplets in the exhibition. The exhibition will be held in Tokyo till May 15, 2022 and at ATC Gallery in Nanko, Osaka from May 21 to 29.

MEMORIES will commemorate the release of the upcoming The Quintessential Quintuplets: The Movie and the 5th anniversary of the serialization.

The exhibition features a wedding theme with visitors welcomed through flower arches and bells, gradually proceeding through the scenes displayed in the series with recorded voices. In addition, the event also features the quintuplet’s room with intricate details.

The event also exhibits a special corner that is themed on the upcoming movie where visitors are forced to make choices among the five sisters to experience unique activities.

The Quintessential Quintuplets: The Movie will premiere in Japan on May 20, 2022. The film is directed by Masato Jinbou at Bilbury Animation Studios.

The anime’s second season premiered on TBS on January 7 and finished airing on March 26, 2021.

The new season was originally scheduled to premiere in Oct 2020 but was delayed due to COVID-19. The anime featured a returning cast.

The manga launched in Kodansha’s Weekly Shōnen Magazine in August 2017, and Haruba ended the series in February 2020.

Kodansha licensed the manga in English, and they describe it as:

One day, a poor high school second-year named Futaro Uesugi comes across a private tutoring gig with good pay. But his pupils are his classmates!! And they’re quintuplets!! A-and they’re all gorgeous girls, but they’re also troublemakers who hate to study and are on the verge of flunking out! And his first task is simply gaining the sisters’ trust?! Every day is a party! The curtain is rising on the Nakano quintuplets’ quirky romantic comedy with five times the cute!!